The following is the text of a video message from U.N. Secretary General Antonio Guterres delivered Friday at the memorial ceremony in Hiroshima on the 76th anniversary of the atomic bombing of the city. 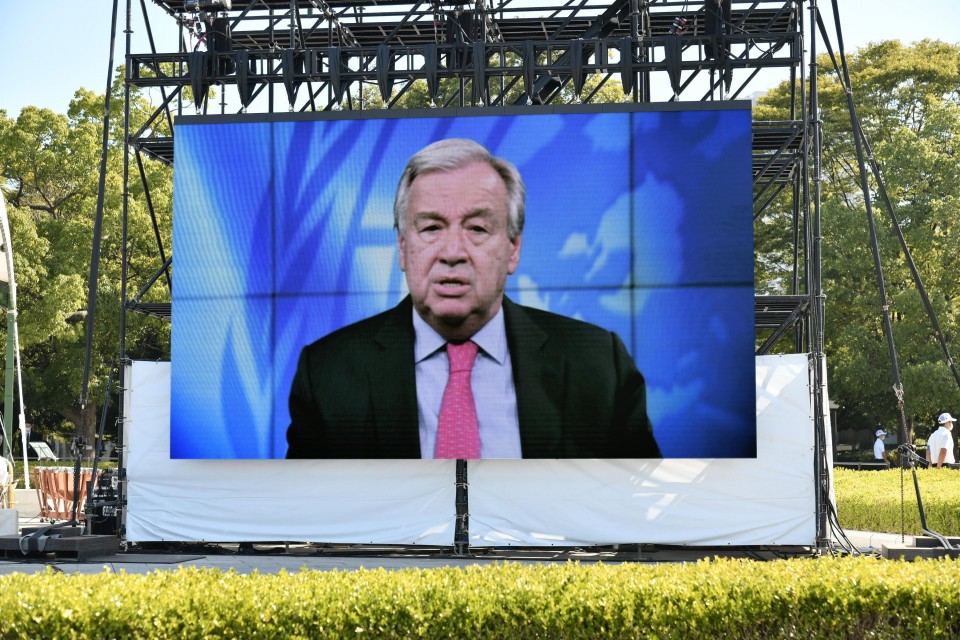 A video message from U.N. Secretary General Antonio Guterres is played at the memorial ceremony to mark the 76th anniversary of the U.S. atomic bombing of Hiroshima on Aug. 6, 2021, at the Peace Memorial Park in the Japanese city. (Kyodo) ==Kyodo

It is an honor to send this message to the Hiroshima Peace Memorial, and to pay tribute to the victims and survivors of the atomic bombing of Hiroshima.

On this day seventy-six years ago, a single nuclear weapon brought unimaginable suffering to the people of this city, killing tens of thousands of people instantly, tens of thousands in its aftermath, and many more in the following years.

Hiroshima is defined not only by the tragedy unleashed on it. The unparalleled advocacy of its survivors, the hibakusha, is a testament to the resilience of the human spirit. They have dedicated their lives to sharing their experiences and campaigning to make sure no-one else suffers their fate.

The United Nations shares the hibakusha's vision of a world without nuclear weapons. This was the subject of the first-ever General Assembly resolution -- passed just five months after the bombing of Hiroshima -- and the Treaty on the Prohibition of Nuclear Weapons, which entered into force on Jan. 22 this year.

I am deeply concerned by the lack of progress towards the goal of a nuclear-free world. States in possession of nuclear weapons have been modernizing their arsenals in recent years, sparking a new arms race.

But the decisions by the Russian Federation and the United States to extend the New START treaty, and engage in a dialogue on arms control, are welcome first steps towards reducing the risk of nuclear catastrophe.

I call on all states that possess nuclear weapons to adopt risk reduction measures, individually and jointly.

We can never take the norm against the use of nuclear weapons for granted. I also urge governments to use the Tenth Review Conference of the Nuclear Non-Proliferation Treaty to strengthen their commitment to a nuclear-weapon-free world.

The only guarantee against the use of nuclear weapons is their total elimination. The United Nations and I personally continue to be fully committed to the goal of a nuclear-weapon-free world.