Hiroshima marked the 76th anniversary of its atomic bombing by the United States on Friday, with its mayor urging world leaders to shift away from nuclear deterrence to trust-building dialogue and for Japan to join a U.N. treaty to ban nuclear weapons.

In the annual ceremony, which was scaled down once again this year amid surging coronavirus infections across Japan, Hiroshima Mayor Kazumi Matsui demanded the Japanese government's "immediate signing and ratification" of the treaty, which came into effect this January. 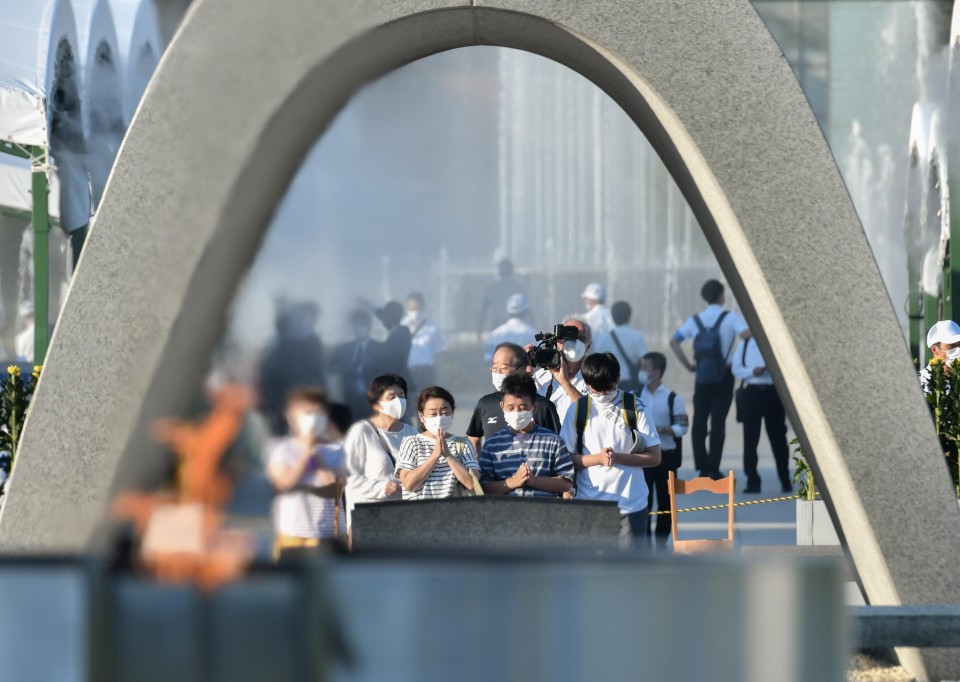 People pray at a monument at the Peace Memorial Park near ground zero in Hiroshima on Aug. 6, 2021. (Kyodo)

After a moment of silence was observed at 8:15 a.m., the exact time of the bombing on Aug. 6, 1945, the mayor also highlighted the significance of combining individual efforts, particularly among youth, to encourage nuclear-armed states to change their policies.

"The road to abolition will not be smooth, but a ray of hope shines from the young people now taking up the hibakusha's quest," he said, referring to survivors of the atomic bombings in Hiroshima and Nagasaki, whose numbers have been decreasing rapidly due to their old age.

Matsui stressed that his western Japanese city would never stop preserving the facts of the catastrophe and promoting a worldwide culture of peace.

"Nuclear weapons are the ultimate human violence. If civil society decides to live without them, the door to a nuclear-weapon-free world will open wide," he said at the ceremony at Peace Memorial Park near ground zero.

In his speech, Japanese Prime Minister Yoshihide Suga stressed the need to "persevere with realistic initiatives" toward nuclear disarmament amid a severe security environment and widening differences between nations' positions on the issue.

At the ongoing Tokyo Olympics, athletes and officials have not been asked to observe a moment of silence despite requests from the Hiroshima city government and other groups for them to participate "in spirit."

The requests were made after International Olympic Committee President Thomas Bach visited Hiroshima on July 16, a week before the opening of the Olympics, and called for global solidarity in building a more peaceful future. 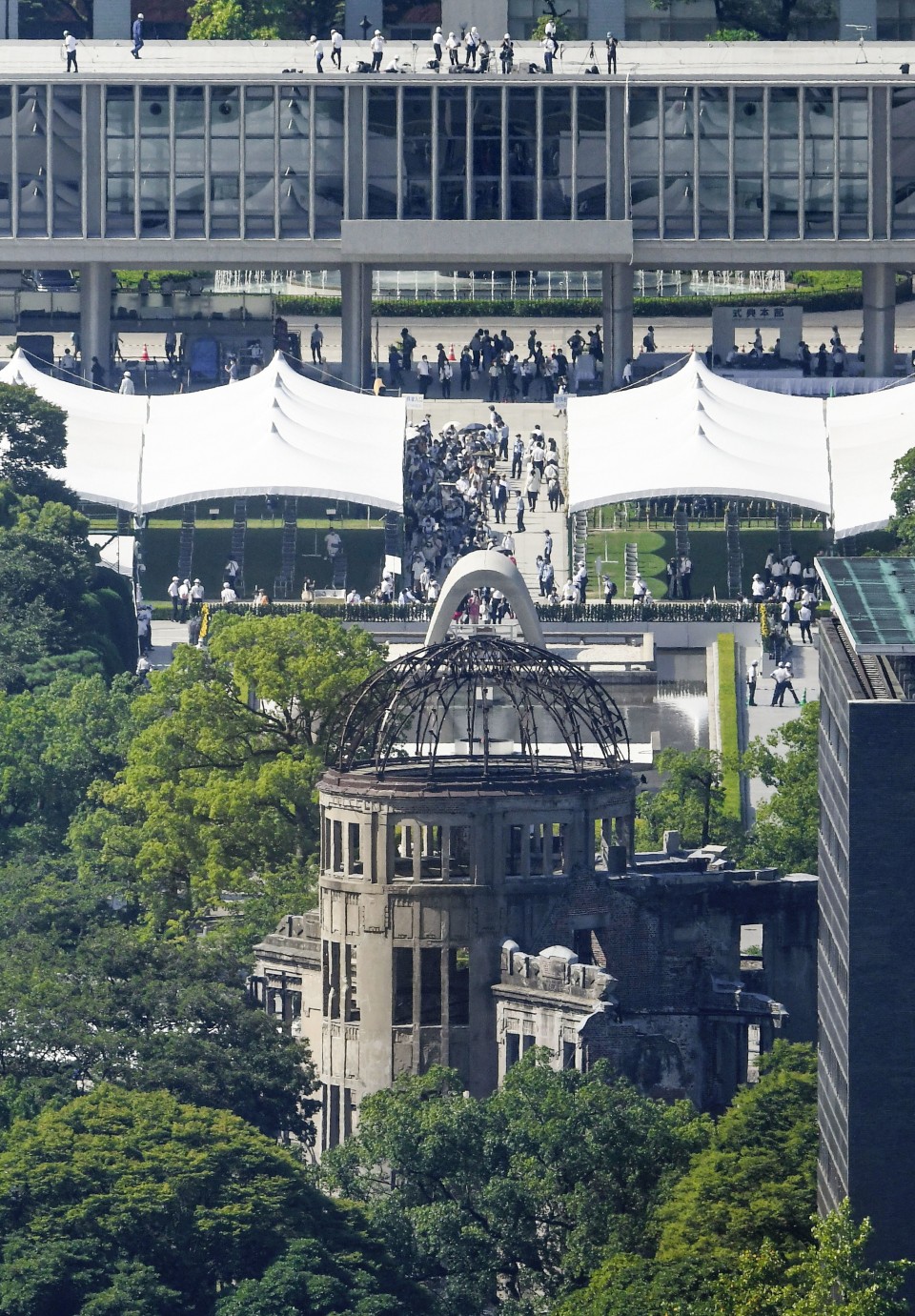 Matsui also urged world leaders to sign the U.N. treaty to ban nuclear weapons, which currently has 86 signatory states, while requesting the Japanese government to carry out "productive mediation" between nuclear-weapon and non-nuclear-weapon states.

Japan has refused to participate in the Treaty on the Prohibition of Nuclear Weapons along with the world's nuclear-weapon states as it sits under the U.S. nuclear umbrella.

Suga, attending the ceremony for the first time as prime minister, did not refer to the new treaty in his speech but said the Japanese government would continue to strive to make the next Nuclear Non-Proliferation Treaty review conference fruitful by finding common ground between countries.

Suga mistakenly skipped a section of his prepared speech that touched on the importance of Japan, as the only country that has suffered atomic bombings, making steady efforts toward the realization of a world free of nuclear weapons.

The prime minister later apologized at a press conference for the oversight.

In a video message, U.N. Secretary General Antonio Guterres, who decided to once again forgo attending the ceremony due to the pandemic, said, "The only guarantee against the use of nuclear weapons is their total elimination."

Amid the spread of the coronavirus infections, the number of guests was around 800, less than 10 percent of those in usual years.

However, 83 countries and the European Union sent representatives to the event, roughly the same number as in recent years. 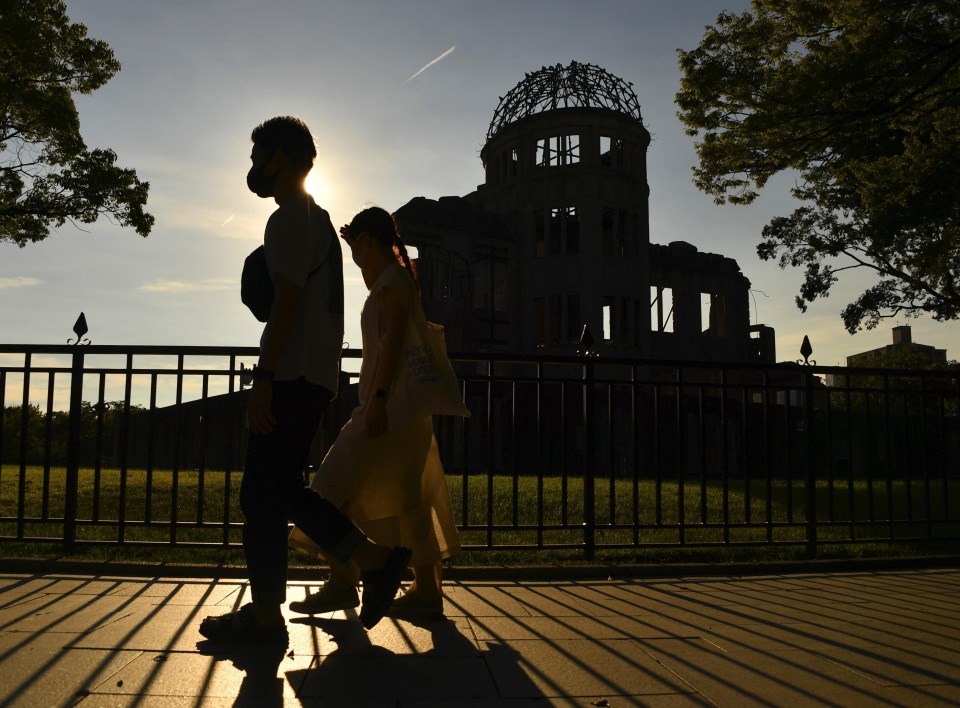 Photo taken on Aug. 4, 2021, shows Atomic Bomb Dome in Hiroshima two days ahead of the 76th anniversary of the U.S. atomic bombing of the western Japan city. (Kyodo) ==Kyodo

A second atomic bomb was dropped on Nagasaki on Aug. 9, and Japan surrendered six days later, marking the end of World War II.

The combined number of surviving victims of the two atomic bombings, known in Japan as hibakusha, stood at 127,755 as of March, down about 8,900 from a year earlier, the Ministry of Health, Labor and Welfare said, adding their average age was 83.94.

The city government of Hiroshima has enrolled a further 4,800 people in the past year on the list of people officially recognized as victims of the atomic bombing who have died, bringing the total number to 328,929.

Before the ceremony, many people visited the park in the early morning to offer prayers and flowers to those that suffered as a result of the bombing.

Mika Tanaka, 45, whose grandfather was an A-bomb survivor, said she brings her three children -- aged 14, 12 and 10 -- to the park every year to ensure they never forget the lessons of the past.

Although her children never got to meet their great-grandfather before he died at 78 in 1989, Tanaka said she has told them of his experience since they were young.

"Hiroshima citizens have the role of linking future generations to the unfiltered voices (of the bombing)," she said. "In our daily lives, it's so easy to forget that a bomb dropped on our city since we didn't directly experience it."