Toyota self-driving buses in Paralympic village to restart on Aug. 31

Toyota Motor Corp. said its self-driving buses will start running again in the athletes' village in Tokyo on Tuesday with improved safety measures after they have been stopped since an accident last week involving a visually impaired Paralympian.

The suspension was made after one of Toyota's e-Palette autonomous electric buses hit the Paralympian, Japanese judoka Aramitsu Kitazono, who was trying to cross an intersection in the village, around 2 p.m. on Thursday.

Toyota said Monday the coordination between bus operators and crossing guides to ensure safety for people with disabilities was not sufficient in the village. 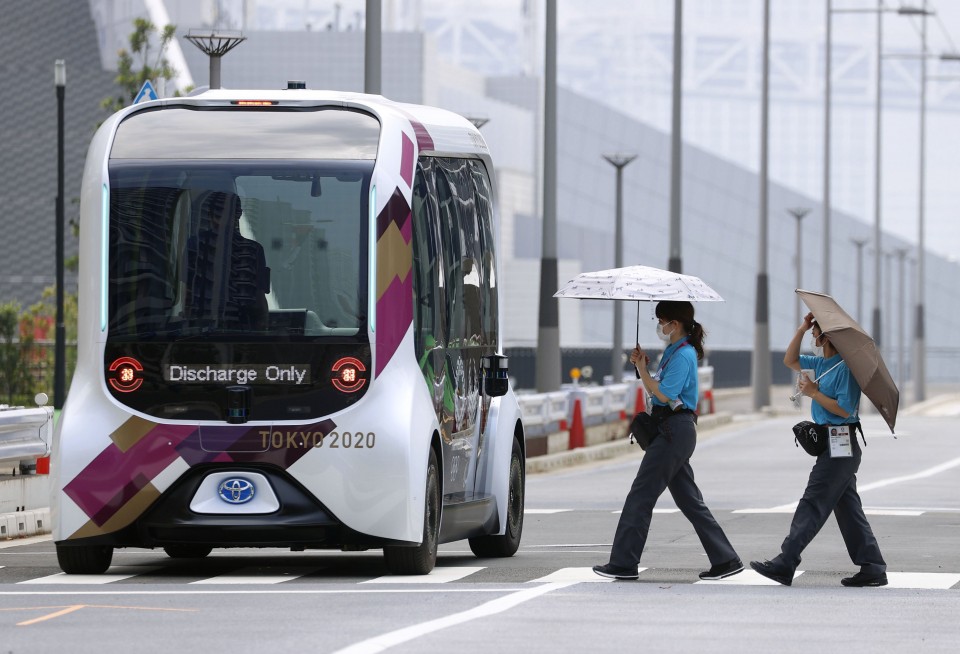 Photo taken July 7, 2021, shows an autonomous bus in service at the athletes' village for the Tokyo Olympics and Paralympics in the capital's Harumi waterfront area. (Kyodo) ==Kyodo

The safety measures include changing the speed control of the buses from automatic to manual mode, turning up the alarm sound of the vehicles and increasing the number of guides working at crossings in the village, said the automaker, a top-tier sponsor of the Tokyo Olympics and Paralympics.

Toyota said the organizing committee of the games made the decision on the resumption of bus services from 3 p.m. on Tuesday.

The 30-year-old judoka, qualified to compete in the men's 81-kilogram division, had to miss his match scheduled for Saturday.

Toshiro Muto, CEO of the committee, said Monday he is believed to have fallen to the ground and been hit in the head, but no abnormality was found upon detailed examination.

Toyota President Akio Toyoda visited the site of the accident last week and told an internet program run by the automaker that "there was some overconfidence" in autonomous driving, while apologizing for making people worried.

On Monday, he also said in a statement, "I pray for the earliest possible recovery of the person. Also, I am sorry for the inconvenience caused for movement at the athletes' village due to the suspension of operation."

Para skier wants public to understand other downsides of disability