The Japanese government decided Wednesday to place eight more prefectures under its COVID-19 state of emergency as the country battles to contain a surge of infections increasingly driven by younger people and prevent a stretched medical system from collapse.

The addition of Hokkaido, Miyagi, Gifu, Aichi, Mie, Shiga, Okayama and Hiroshima means that 21 of Japan's 47 prefectures are now under the state of emergency that includes Tokyo and Osaka, affecting over 75 percent of the population. The measure will run from Friday to Sept. 12.

Vaccinations against COVID-19 have progressed in Japan but the highly contagious Delta variant of the coronavirus has sent daily reported cases surging in many parts of the country.

Concerns are growing about infections spreading rapidly among young people as many students in Japan are returning to school after the summer break. 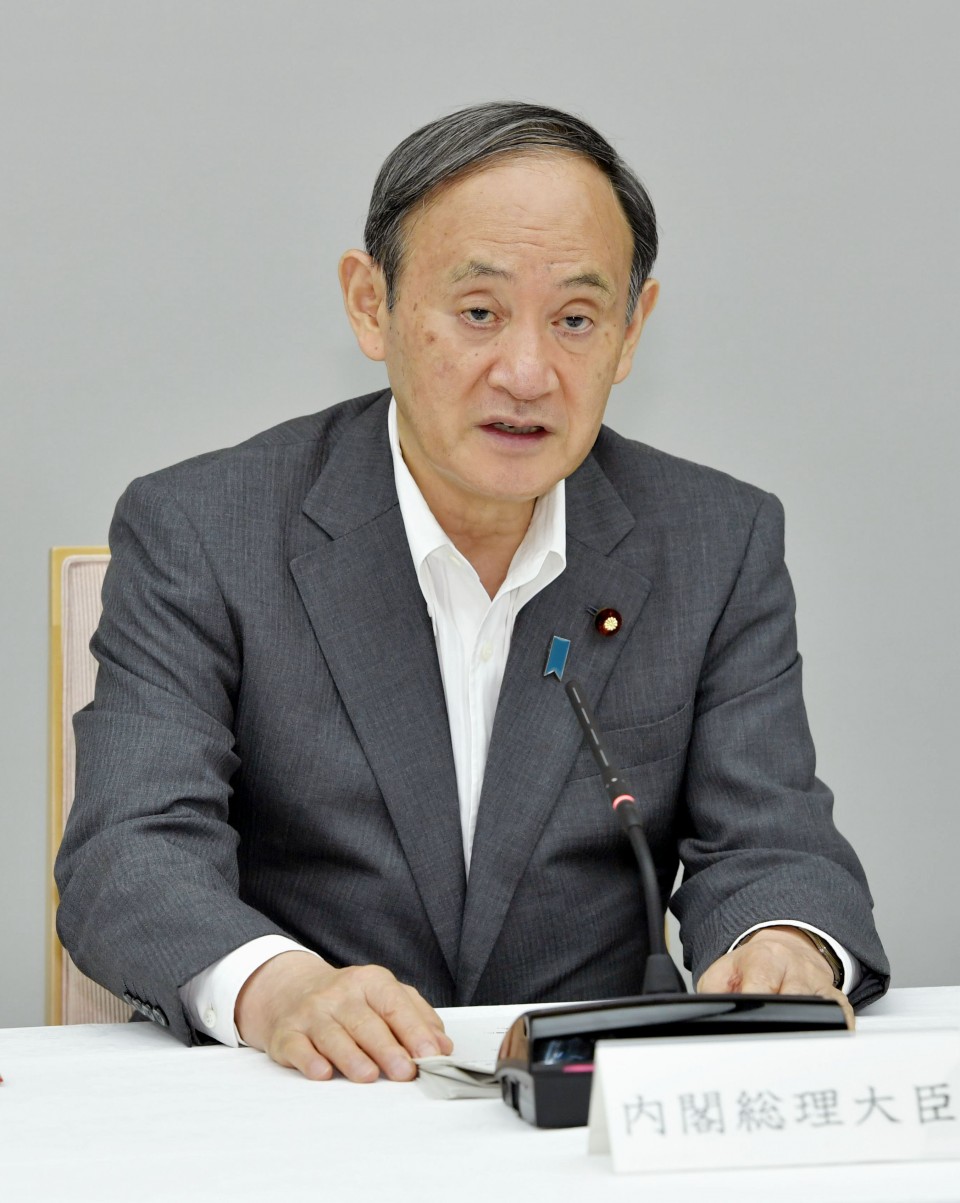 Japanese Prime Minister Yoshihide Suga announces at his office in Tokyo on Aug. 25, 2021, the government's decision to place eight more prefectures under its COVID-19 state of emergency. (Kyodo) 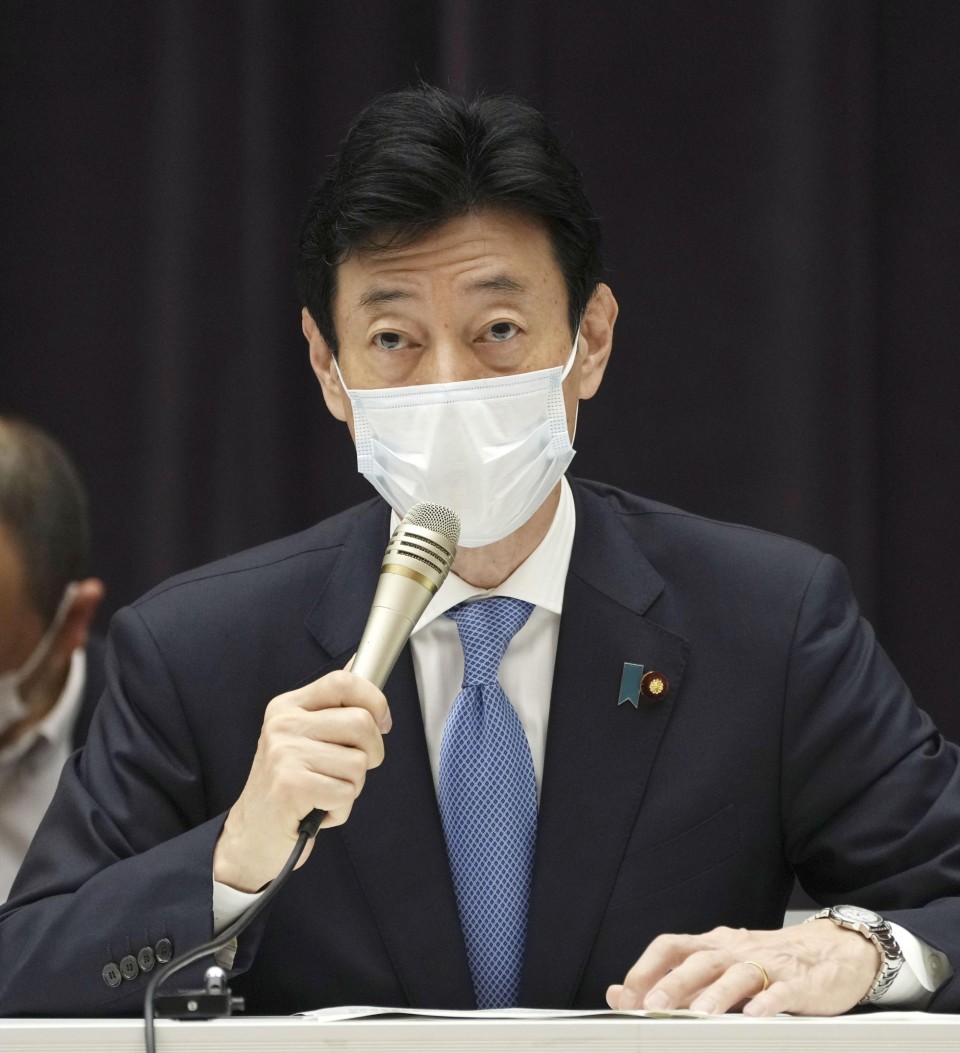 Economic revitalization minister Yasutoshi Nishimura, who is also in charge of Japan's coronavirus response, speaks during a COVID-19 expert panel meeting in Tokyo on Aug. 25, 2021. (Kyodo)

"In most regions across Japan, infections are spreading on an unprecedented scale," Prime Minister Yoshihide Suga said at a press conference.

Acknowledging that the medical system is in a "severe" situation, Suga said, "I'm unwaveringly determined to overcome this crisis whatever it takes by seeking cooperation from people."

The government plans to distribute 800,000 antigen test kits for kindergartens, primary schools and junior high schools in Japan, and make sure teachers can get vaccinated as soon as possible.

Under the state of emergency, restaurants are asked not to serve alcohol or offer karaoke and instructed to close by 8 p.m. Major commercial facilities, including department stores and shopping malls, are requested to limit the number of customers allowed in at the same time.

Suga has called for human traffic in crowded areas to be cut by half and for firms to have employees work from home and cut the number of commuters by 70 percent.

During the press conference, Suga dismissed the idea of asking schools to shut across the board to curb infections, after his predecessor Shinzo Abe's abrupt school closure request last year drew sharp criticism from parents.

Suga has been under pressure over how to respond to the pandemic and its economic fallout due to the protracted state of emergency.

He has to call a general election by this fall as the term of House of Representatives members expires in October. Public support for his Cabinet has plunged to record-low levels since he took office last year, according to polls by media outlets.

The effectiveness of the state of emergency has been called into question as it relies on voluntary public cooperation. Prefectural governors have called for stricter lockdown measures, which would require a new legal framework.

The government will also expand the quasi-state of emergency currently covering 16 prefectures to another four -- Kochi, Saga, Nagasaki and Miyazaki -- allowing governors to place restrictions on specific areas rather than entire prefectures.

Suga said nearly 60 percent of the country's population will have been vaccinated by the end of September, on a par with the United States and Britain. "We are beginning to see the light," he said.

The government will also expand to outpatients the availability of "antibody cocktail treatment," currently limited to COVID-19 patients admitted to hospitals.

The government's decision on Wednesday comes a day after the Tokyo Paralympics began, which like the Olympics are being held almost entirely without spectators to lower the risk of infections spreading.

In Tokyo, which has competition venues for the Paralympics, 4,228 new COVID-19 cases were reported Wednesday. Across the nation, the daily count came to over 24,300 cases.

Hospitals are struggling to deal with the surging number of patients in severe condition. A shortage of beds has led to asking many with milder symptoms to recuperate at home.

Suga had hoped Japan would stem a surge in COVID-19 cases as more people got vaccinated.

He reiterated Wednesday that the highest priority is on coping with the pandemic and that he will decide when to dissolve the lower house for an election, with "very few options" at hand.

Falling public support, combined with a recent local election loss by a candidate supported by Suga and some members of his Liberal Democratic Party, has raised concern about his leadership in the ruling party. The LDP is planning to hold a presidential election next month.

Japan has been speeding up its belated vaccination drive in recent months, first targeting elderly people and people with preexisting health conditions who are at higher risk of developing severe symptoms. Some 42.6 percent of people in Japan have received a second vaccine shot, according to government data as of Wednesday.

With over 86 percent of people aged 65 and older having been fully vaccinated, the government now faces the challenge of promoting vaccinations among younger people.

Chief Cabinet Secretary Katsunobu Kato said the government is considering a plan to use some reserve funds for fiscal 2021 set aside for coronavirus countermeasures to secure additional vaccine doses.

He also suggested the government needs to collect data and study the practice of mixing and matching different vaccines, saying some overseas data show it is effective in boosting immunity, although the government will not actively recommend such a practice in the current situation.