Japan's health ministry along with the Tokyo metropolitan government asked hospitals in the capital on Monday to secure beds and accept as many COVID-19 patients as possible in the first such state-level request, as a recent resurgence in infections outstrips the city's medical system.

To further relieve strain on hospitals in Tokyo, the metropolitan government started operating the same day a facility to provide oxygen support to COVID-19 patients with relatively mild symptoms. 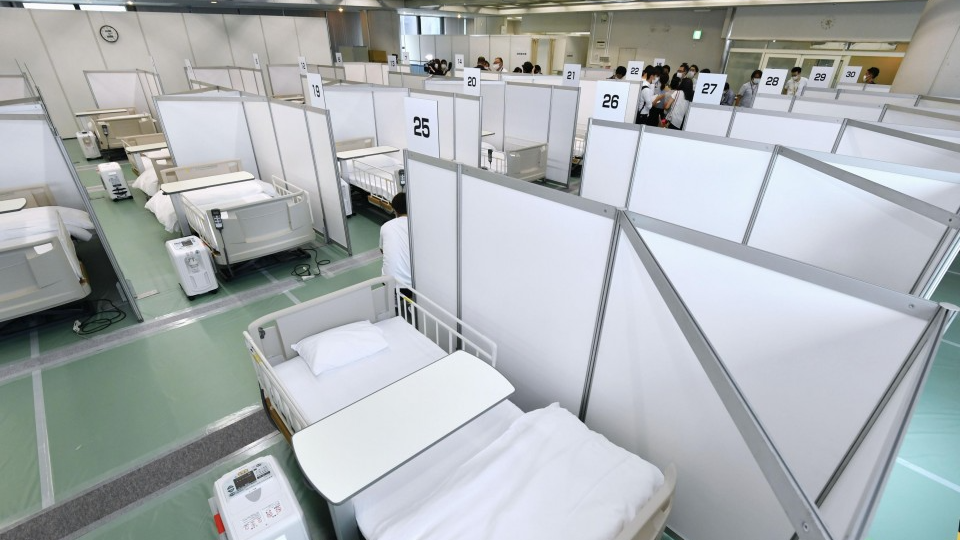 Photo taken on Aug. 21, 2021, in Tokyo's Shibuya Ward shows an "oxygen station" for use by COVID-19 patients who have been recuperating at home. (Kyodo) ==Kyodo

As the Japanese capital has been witnessing record levels of coronavirus cases in recent weeks, health minister Norihisa Tamura and Tokyo Gov. Yuriko Koike held a meeting and decided to take stronger measures on medical institutions by making the request to the hospitals under a revised infectious disease law.

Under the law revised in February, the ministry and Tokyo government can expose the names of hospitals that do not have a valid reason, such as lack of medical staff, for noncompliance to the request in securing beds.

"Infections driven by the Delta variant are unlike anything we have seen before," Tamura told reporters after the meeting. "I would like to ask for (the hospitals') help to get through this difficult situation."

While 4,034 COVID-19 patients have been hospitalized as of Monday, the Tokyo government aims to add about 600 hospital beds to raise the total to 7,000 beds available for such patients.

Still, the effect of the latest step remains unclear.

"As many hospitals are already in a difficult situation to proactively accept patients who may become seriously ill, it would be hard to change their policy even if the names of hospitals are made public," said Tetsuya Matsumoto, a professor of infectious diseases at International University of Health and Welfare.

Tamura and Koike also decided to ask hospitals, universities with medical departments and nursing schools to dispatch staff who will be stationed at facilities such as an oxygen station to treat COVID-19 patients.

The 24-hour oxygen station set up by the metropolitan government in the capital's Shibuya Ward has 130 beds and is staffed by three doctors and 25 nurses.

It is designed to treat patients who have been asked to recuperate at home but who experience concerns over breathing. Stays are likely to be short term, such as one or two nights.

The station was opened in the former site of the National Children's Castle, a complex that contained play and educational facilities for children.

As of Sunday, more than 39,000 patients in Tokyo are recovering at home or elsewhere without hospital admission, underscoring the urgent need to expand the support system in the capital.

Meanwhile, the central government is currently considering whether there is a need to expand a COVID-19 state of emergency to other areas beyond Tokyo and 12 other prefectures, government sources said.

The government's top spokesman Katsunobu Kato said at a press conference Monday the governors of Aichi, Gifu, Mie and Hokkaido have asked the central government to declare the emergency in their areas.

In Osaka Prefecture, also under the state of emergency, a site opened to provide AstraZeneca Plc's COVID-19 vaccine at Shiromi Hall, a multipurpose hall in Osaka Castle Park in Osaka city. The move came as the prefecture has seen daily infections top 2,000 since Aug. 18, with the city accounting for some 40 percent of the cases.

The Ministry of Health, Labor and Welfare approved the AstraZeneca vaccine in May, but the government initially withheld supplying the doses, taking into consideration reported rare cases of blood clots among young people overseas.

It began supplying it to prefectures most in need of additional doses such as Tokyo and Osaka earlier this month for use on people aged 40 or older, and those aged 18 or above who cannot take the Pfizer or Moderna doses due to reasons such as allergic reactions. The two shots are administered with a gap of eight weeks.

The city government is planning to open another vaccination site at the Osaka City Air Terminal building from Aug. 30.

Kawaguchi in Saitama Prefecture neighboring Tokyo also started on Monday AstraZeneca shots in principle to those aged 40 or above. Reservation slots of 500 per day have been filled up for the entire week.

Japan's inoculation rate still lags far behind other advanced economies, with roughly 51 million people, or just over 40 percent of the population of 125 million, having received two doses as of Monday.