Japan's Daiki Hashimoto secured his second gymnastics gold medal of the Tokyo Olympics on Tuesday when he claimed the men's horizontal bar title.

The 19-year-old scored 15.066 after nailing all his release elements as well as his landing in a flawless display at Ariake Gymnastics Centre.

Croatia's Tin Srbic won silver with a score of 14.900, followed by Nikita Nagornyy of the Russian Olympic Committee on 14.533. 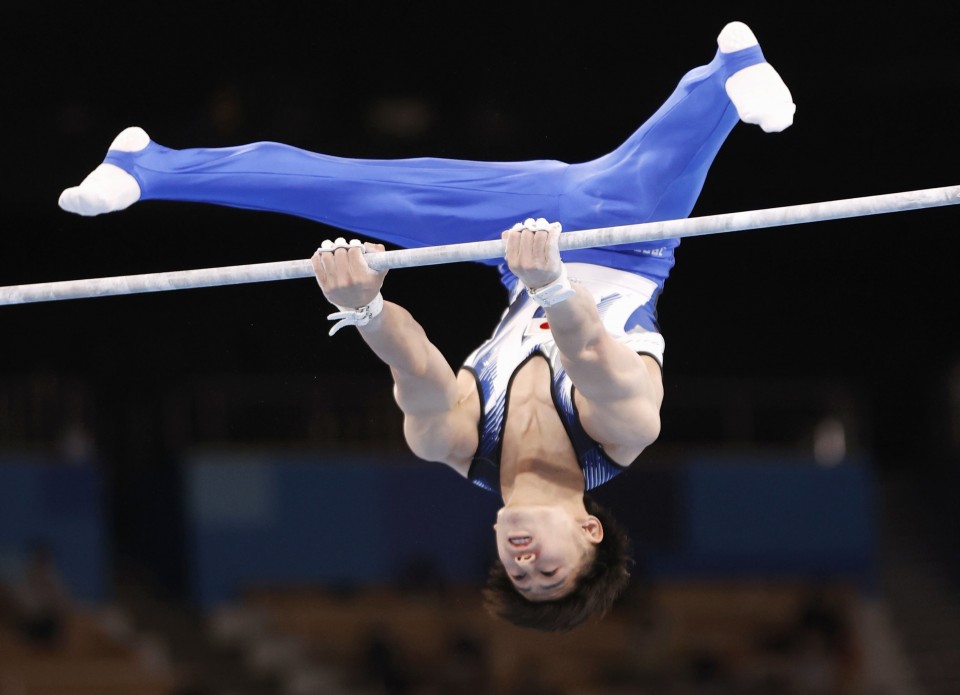 Daiki Hashimoto of Japan performs in the men's horizontal bar final at the Tokyo Olympics on Aug. 3, 2021, at Ariake Gymnastics Centre. Hashimoto won his second gold medal of the games. (Kyodo) ==Kyodo 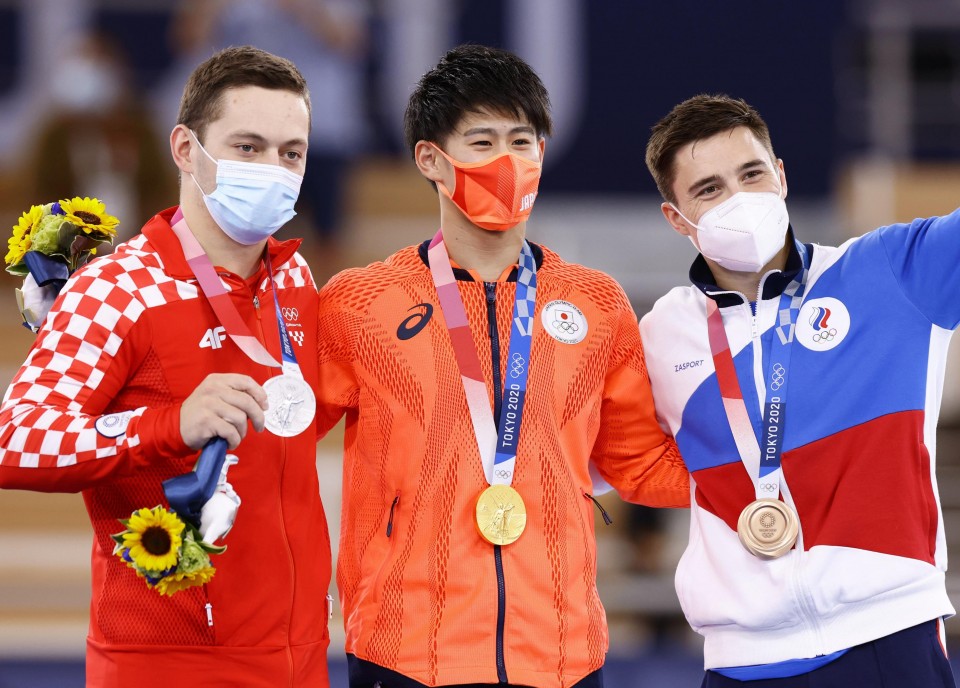 (From L) Silver medalist Tin Srbic of Croatia, gold medalist Daiki Hashimoto of Japan and bronze medalist Nikita Nagornyy of the Russian Olympic Committee pose with their medals for the men's horizontal bar at the Tokyo Olympics on Aug. 3, 2021, at Ariake Gymnastics Centre, wearing masks for protection against the coronavirus. (Kyodo) ==Kyodo

"I knew it was going to be difficult to perform as usual with all the specialists competing," Hashimoto said. "Many of them fell trying to be aggressive, I only performed as usual. But I've managed to go all the way, and I believe it's a good way to win gold."

"I thought it was going to go down to the landing, so I braced my nerves to nail it and I'm really glad to have done so."

Hashimoto won the individual all-around on Wednesday when he jumped from bronze to gold in the horizontal bar, his final apparatus.

It is Hashimoto's third medal at these games after also winning silver in the men's team event.

"I was singing the national anthem quite loudly, I had the mask on but I hope people got that from me," Hashimoto said.

"Representing Japan, I want to keep going carrying that pride not just when competing, but also in singing national anthem too."

Having been anointed heir to "King" Kohei Uchimura, the winner of the last two individual all-arounds at the Olympics, Hashimoto said he is eager to keep emulating his 32-year-old compatriot.

"I've always aimed to be like him," Hashimoto said. "I'm sure he'd have won us the gold if he were here, I'll try to catch him soon and surpass him."

"I wanted gold in the team event but getting to perform 18 times without a mistake will stand me in good stead in my future career. I felt I've grown during these games."

The all-rounder made rapid progress during the games' one-year postponement as he overcame his weaknesses on the parallel bars and rings to win the all-around title at the national championships in April before reaching the top of the world, where he will likely to reside for a long time.

"I'll become the one to chase for others, but I'll not give up my place as the world champion. I'll stay humble and pursue my ideal to keep becoming the world's No. 1," Hashimoto said.

Takeru Kitazono, who won five gold medals at the 2018 Youth Olympics, meanwhile, made the games despite suffering damage to ligaments in his both arms and a chip fracture in his right arm during the nationals when he fell from the horizontal bar.

The 18-year-old finished sixth on 12.333 as he fell from the bar twice on the day, and vowed to be at his best in Paris.

"I went in trying to enjoy and give my all in the final stage (of these games) but I'm left frustrated," Kitazono said. "I didn't think I could make it at that time...I'll try to be the main man for Japan over the next three years." 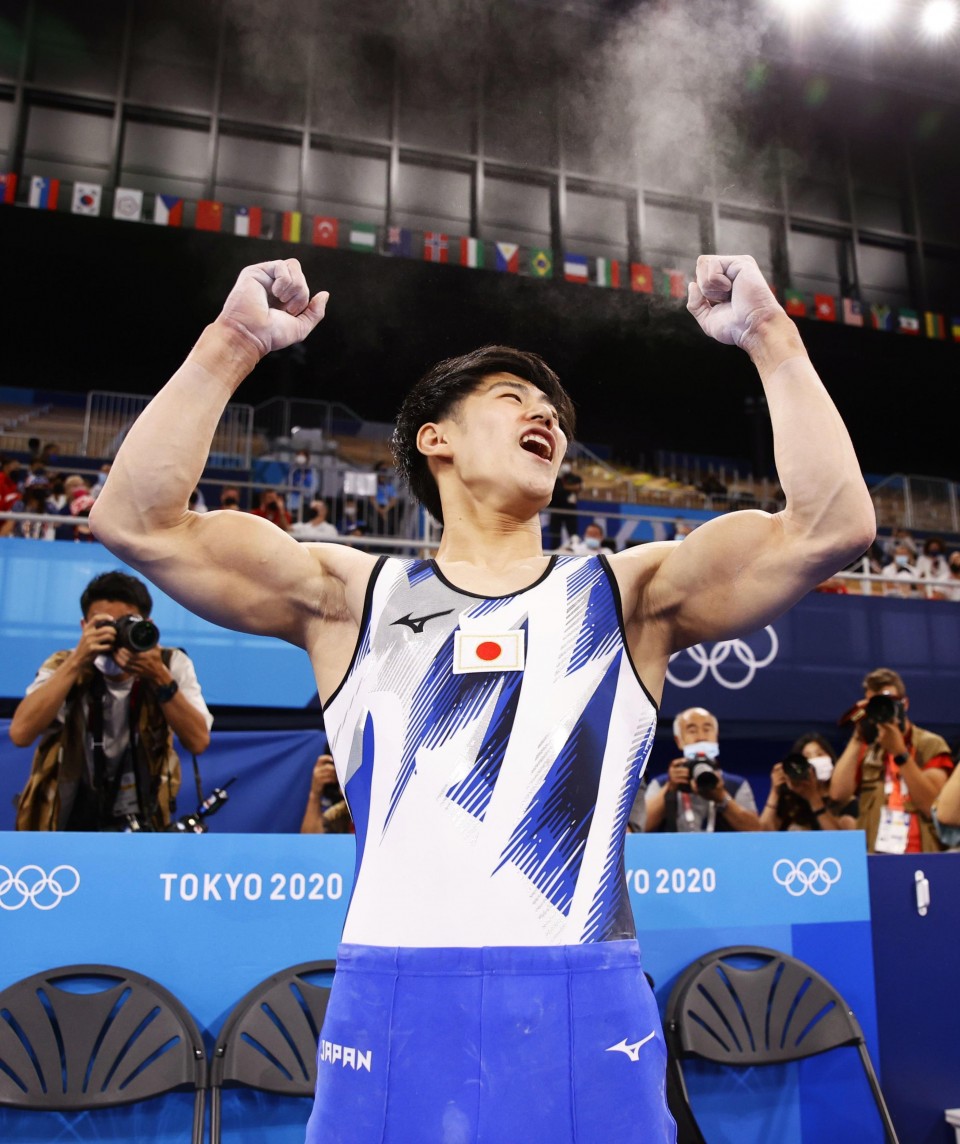 Daiki Hashimoto of Japan reacts after performing in the men's horizontal bar final at the Tokyo Olympics on Aug. 3, 2021, at Ariake Gymnastics Centre. (Kyodo)