Japan plans to expand the COVID-19 state of emergency covering Tokyo and 12 other areas to eight more prefectures as it looks to quell the country's largest wave of infections, government sources said Tuesday.

Hokkaido, Miyagi, Gifu, Aichi, Mie, Shiga, Okayama and Hiroshima will come under the measure from Friday until Sept. 12. Another four prefectures -- Kochi, Saga, Nagasaki and Miyazaki -- will be newly added to the quasi-state of emergency, the sources said. 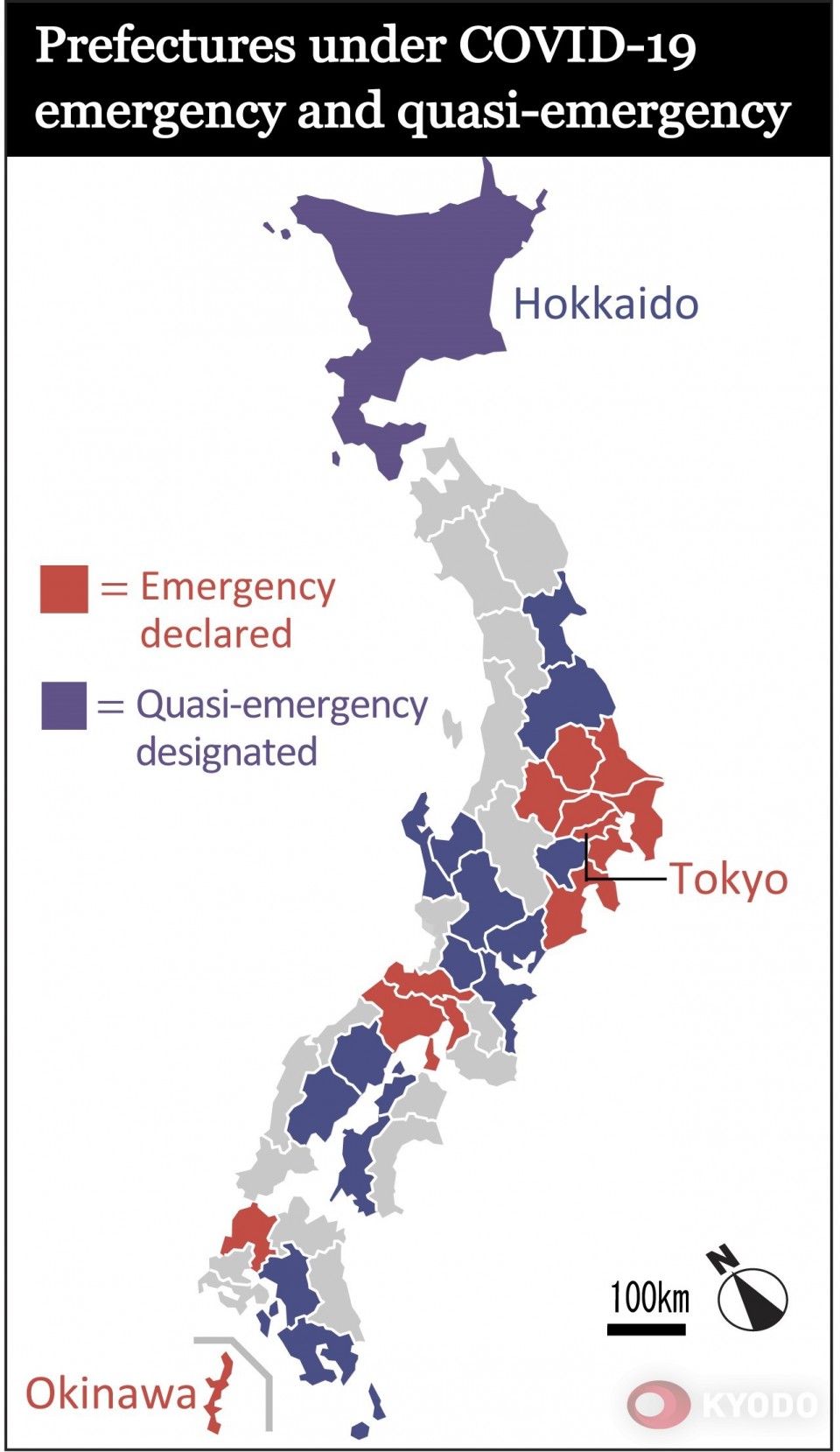 The envisaged expansion will mean that from Friday, over 70 percent of Japan's 47 prefectures will be covered by some form of emergency to battle the spread of the novel coronavirus.

Prime Minister Yoshihide Suga met with members of his Cabinet including health minister Norihisa Tamura and Yasutoshi Nishimura, the minister in charge of the COVID-19 response, to discuss the move, with the decision to be made official at a task force meeting on Wednesday.

"Securing hospital beds and temporary medical facilities for COVID-19 patients, as well as ensuring those recuperating at home can be contacted is of the utmost importance. We will continue to do all we can," Suga told reporters following Tuesday's meeting.

Under the state of emergency, restaurants are asked not to serve alcohol or offer karaoke, and instructed to close by 8 p.m. Major commercial facilities including department stores and shopping malls are asked to limit the number of customers allowed in at the same time.

Suga has also called on foot traffic in crowded areas to be cut by half, and for firms to have employees work from home and cut commuters by 70 percent.

The expansion of the state of emergency -- currently in place in Tokyo as well as Ibaraki, Tochigi, Gunma, Chiba, Saitama, Kanagawa, Shizuoka, Kyoto, Osaka, Hyogo, Fukuoka and Okinawa prefectures -- comes as the capital hosts the Paralympics, to be held almost entirely without spectators, from Tuesday.

Around 21,500 new daily COVID-19 cases were reported across the country Tuesday, with eight prefectures logging record infections as the highly contagious Delta variant of the virus continues to spread.

The number of patients in serious condition hit a record high for the 12th consecutive day at 1,935, according to the health ministry.

Hospitals across much of Japan are struggling amid the surge in COVID-19 cases, with a dearth of beds forcing many with milder symptoms to cope at home.