The Taliban, which has gained almost complete control over Afghanistan, has asked the United States to retain its embassy in Kabul after the U.S. military pullout by Aug. 31, according to a Taliban official and diplomatic sources.

"We would like the U.S. to remain in Afghanistan very much," a senior Taliban official told Kyodo News in confirming that the Islamist group has conveyed that position to Washington.

"We will provide absolute security (of the embassy)," he said. 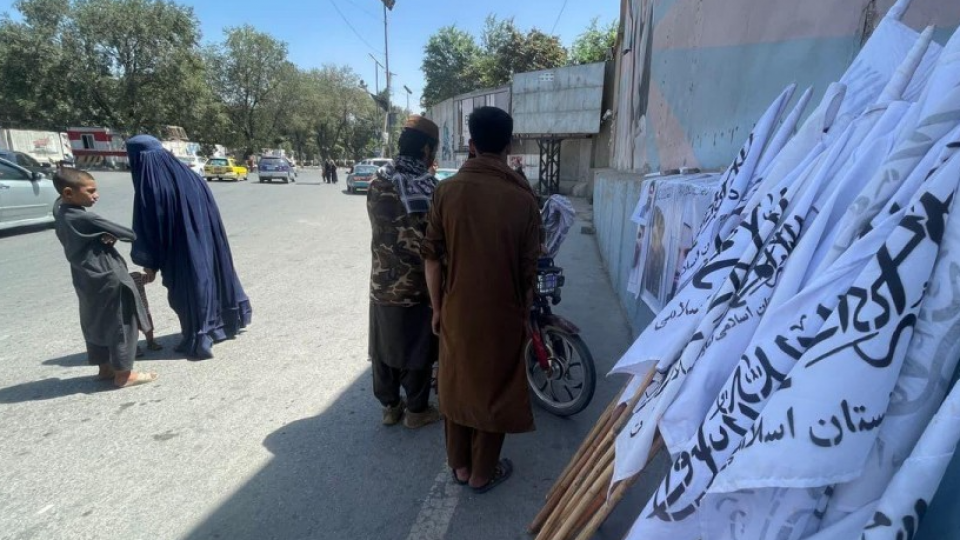 Flags of Taliban distributed to people near the evacuated U.S. Embassy in Kabul, Afghanistan, on Aug. 26, 2021. (Anadolu Agency/Getty /Kyodo)

According to multiple diplomatic sources, the Taliban have requested the embassy stay put in discussions with the United States in Kabul and in Doha, Qatar, where the political operations of the group have been based in recent years.

Indeed, the topic may have been on the agenda of Monday's secret meeting in Kabul between U.S. Central Intelligence Agency Director William Burns and Abdul Ghani Baradar, the Taliban's de facto leader.

Observers say it appears that the Taliban's aim is to avoid a decisive disconnect with the United States and facilitate international recognition of the new Afghan administration to be formed following 20 years of war.

U.S. Secretary of State Antony Blinken told reporters Wednesday that the Taliban have committed publicly and privately to permitting safe passage from the country for Americans, third-country nationals, and Afghans at risk after the Aug. 31 pullout deadline expires.

"We're developing detailed plans for how we can continue to provide consular support and facilitate departures for those who wish to leave after Aug. 31," he said.

Asked specifically about the future of the U.S. Embassy -- currently evacuated to Kabul's airport where the military-led evacuation is in full swing -- and whether American diplomats would remain in Afghanistan after the military departs, Blinken said, "We're looking at a variety of options."

He did not elaborate except to say "that is primarily going to be a diplomatic effort, a consular effort, an international effort."

With an estimated 1,500 Americans remaining in the country, Blinken emphasized that "there is no deadline on our work to help any remaining American citizens who decide they want to leave to do so."

Washington's recognition of the new Afghan administration to be ushered in by the Taliban is expected to partly hinge on human rights considerations, especially the protection of women's rights.

To that end, Blinken vowed, "I will use, every diplomatic, economic, political, and assistance tool at my disposal...to do everything possible to uphold their basic rights."

The Taliban is seeking to build relationships with the international community by insisting it respects women's human rights.

Also of international concern is the possibility of Afghanistan again becoming a hotbed of terrorism as it has not broken its ties with radical Islamist groups.

The United States has warned its citizens to avoid Kabul airport amid concerns about the potential for attacks by Afghanistan's branch of the Islamic State terror group.