Prime Minister Yoshihide Suga said Tuesday the government will "swiftly" consider ways to help people in a similar situation to the plaintiffs in a lawsuit who were ruled eligible for health care benefits due to their exposure to radioactive "black rain" in 1945.

The prime minister revealed the policy in a statement adopted by the Cabinet in the afternoon, which also said the government will not appeal the Hiroshima High Court ruling earlier in the month concerning the 1945 U.S. atomic bombing of the western Japan city. 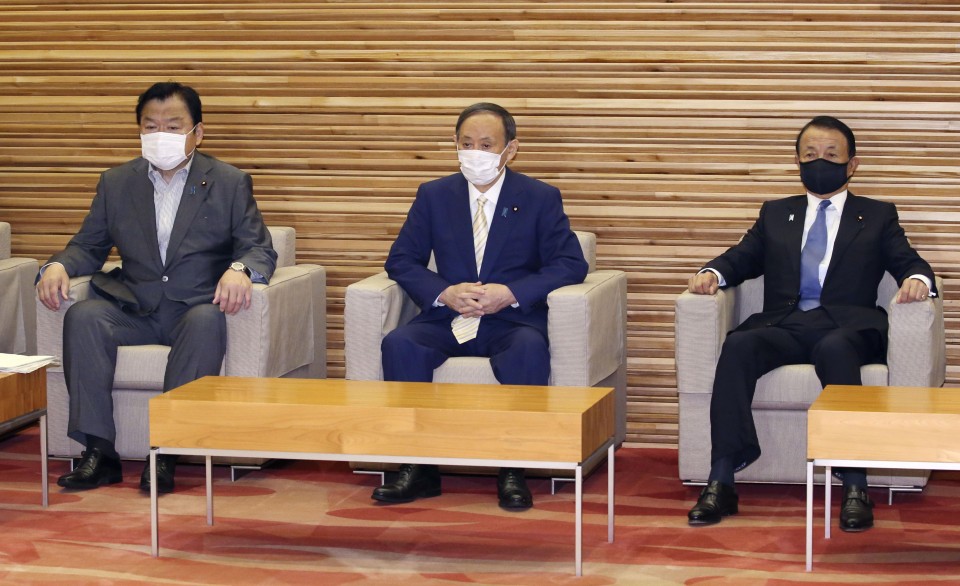 "We are thankful that (the statement) mentioned people other than the plaintiffs who were exposed to the black rain," said Masaaki Takano, the 83-year-old head of the plaintiffs.

Hiroshima Gov. Hidehiko Yuzaki, answering questions from reporters, spoke highly of Suga's statement for referring to "saving" the victims of the black rain.

Suga, however, said the high court decision was not consistent with past rulings on health damage due to radioactive rain and was not based on scientific radiation dose estimates.

The high court ruling upheld the plaintiffs' argument that people should be recognized as hibakusha if there is a possibility of internal radiation exposure due to the ingestion of contaminated food and water.

Takano was critical of the government stance on internal exposure, saying the government "brought up (unnecessarily) the scientific basis here again just like it did during the trial."

The statement was adopted a day after Suga announced that the government did not intend to appeal the ruling in consideration of the plaintiffs' age and illnesses. But the prime minister said Monday the July 14 high court ruling was not entirely acceptable and the government would clarify its position in a statement.

Chief Cabinet Secretary Katsunobu Kato suggested Tuesday the latest government decision will also affect those seeking recognition as hibakusha in Nagasaki Prefecture, the other city devastated by a U.S. atomic bombing in 1945.

"The health ministry will consult on the matter with Hiroshima Prefecture, Hiroshima city, Nagasaki Prefecture and Nagasaki city. We seek to swiftly consider our response toward saving people," Kato said at a regular press conference in the morning.

A different group of plaintiffs who experienced the Nagasaki bombing outside the area recognized by the government and are seeking recognition as survivors and associated benefits welcomed the government's decision to forego an appeal.

"I'm happy as if it happened in my case. I hope the government will also save us," said Chiyoko Iwanaga, the 85-year-old head of the plaintiffs.

Nagasaki Mayor Tomihisa Taue said in a statement, "We will continue to urge the government to expand the area for recognizing atomic bomb survivors" to save people who encountered the bombing outside the recognized zone in Nagasaki.

"They are also getting old and suffering from illnesses just like 'the black rain victims,'" he said.

Suga told reporters Tuesday that the government will deal with the black rain lawsuit in Hiroshima and the lawsuit in Nagasaki separately.

"As for (the issue in) Nagasaki, I would like to watch how the trial develops," he said.

The prime minister's statement said the 84 plaintiffs in Hiroshima Prefecture, including deceased individuals, will be certified as hibakusha swiftly.

Hiroshima Mayor Kazumi Matsui said the city plans to hand out atomic bombing survivor certificates for the 84 plaintiffs by Aug. 6, the anniversary of the Hiroshima bombing.