Intermittent rain and the risk of a secondary disaster posed difficulties to rescue workers racing against time following a large mudslide in a hot spring resort town southwest of Tokyo that killed at least two people and destroyed more than 100 houses.

The local governments also have been struggling to confirm how many people went missing after Saturday's disaster in Atami, Shizuoka Prefecture. They initially reported some 20 were unaccounted for but now say they are trying to reach nearly 150 people, some of whom may have moved before the incident. 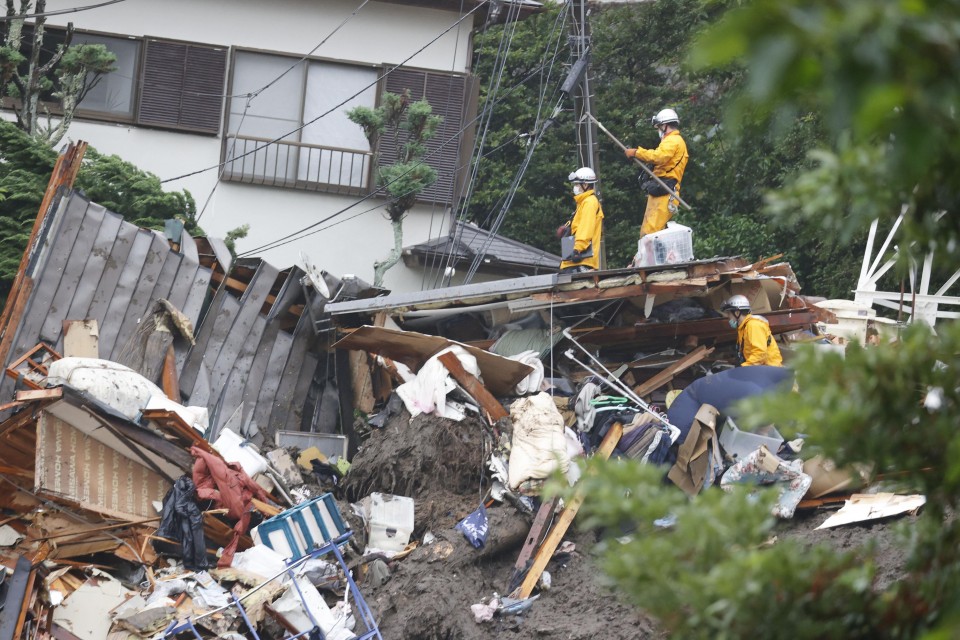 Rescue workers search for the missing on July 4, 2021, after torrential rain triggered a large mudslide in Atami, Shizuoka Prefecture. (Kyodo)

So far, 23 people have been rescued from where they were trapped, including a seriously injured woman, the municipal government of Atami said.

Shizuoka Gov. Heita Kawakatsu said the prefecture will look into whether the mudslide resulted from the housing land and other development projects that deforested the area and may have reduced the capacity of mountain soils to retain water.

Such a project had been under way at the location where the mudslide started, the prefectural government said, adding that about 100,000 cubic meters of soil collapsed into a nearby river. 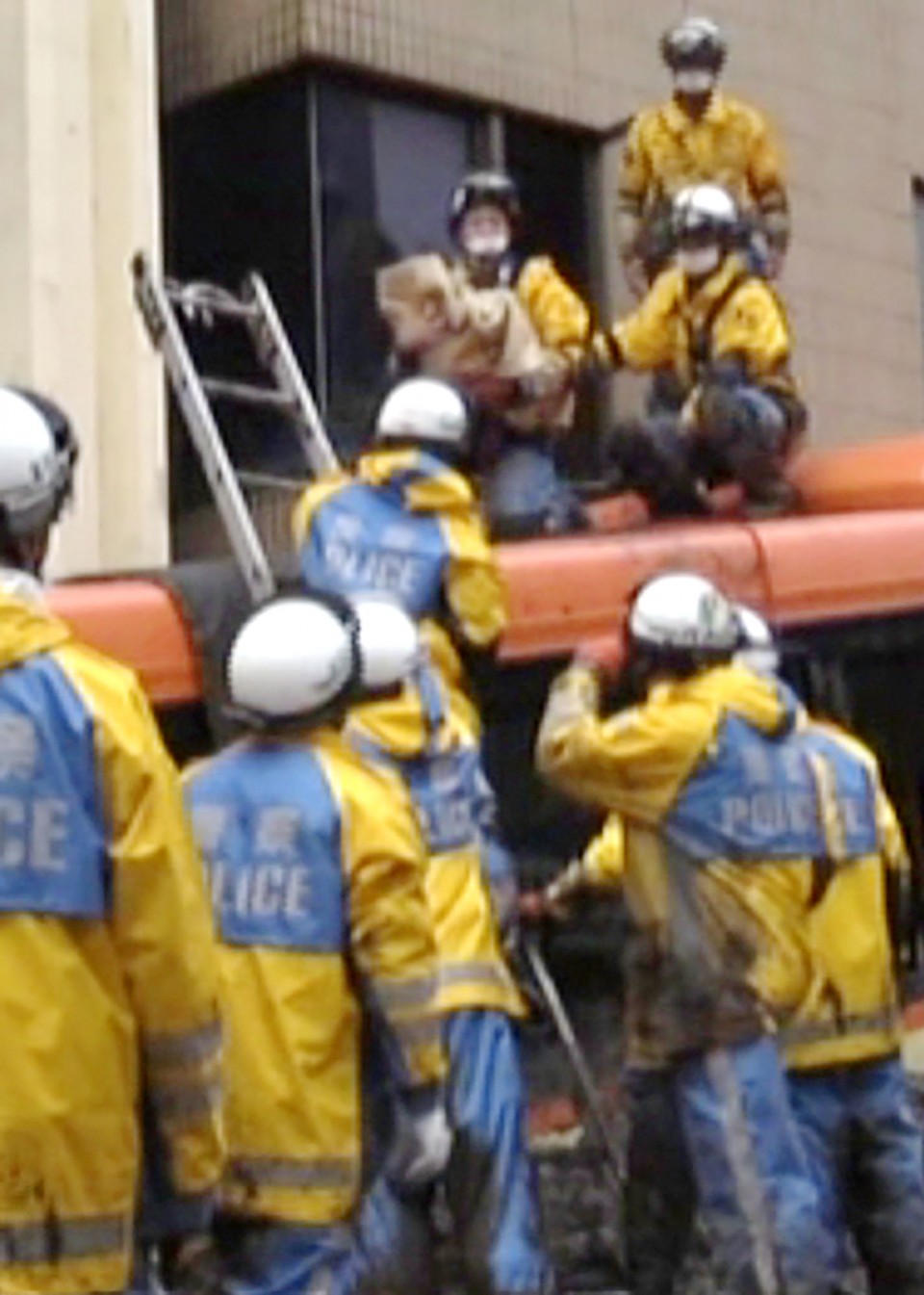 A police officer (back C) takes a girl wrapped in a blanket out of a second-floor window of a condominium building on July 4, 2021 in Atami, Shizuoka Prefecture, as part of rescue efforts a day after a large mudslide. (Photo courtesy of the Metropolitan Police Department)(Kyodo)

A witness downstream said the river, usually less than 2 meters wide, was overflowing with dark water and had swollen to several dozen meters wide.

Around 1,100 firefighters, police and Self-Defense Forces personnel were involved in the search for the missing while work to clear away mud and debris using heavy machinery began early in the morning. The work on Sunday ended at 6 p.m.

The disaster destroyed homes after mud cascaded down a mountain top around 10:30 a.m. Saturday, traveling a distance of about 2 kilometers. As of Sunday noon, nearly 390 people had evacuated.

The coast guard also continued looking for missing persons at a nearby port, where two women showing no signs of life were discovered and later confirmed dead Saturday.

Atami Mayor Sakae Saito instructed members of a local task force meeting to do their best in the search and rescue efforts, saying the "72 hours (after the incident) are crucial." 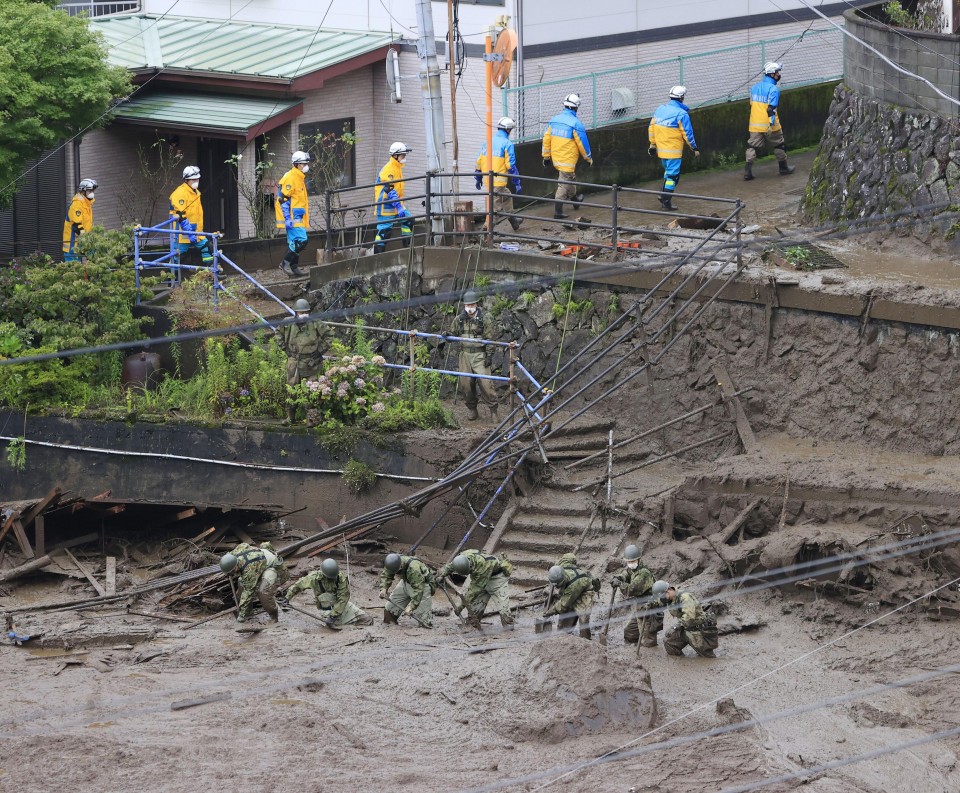 Search and rescue operations for missing persons are under way on July 4, 2021, at the site of a large mudslide triggered by torrential rain in the Shizuoka Prefecture hot spring resort city of Atami, southwest of Tokyo, the previous day. (Kyodo) ==Kyodo

The Japan Meteorological Agency said heavy rain is expected to continue mainly in areas on the Sea of Japan side of the country and warned the public to be vigilant against further mudslides, flooding and swollen rivers.

According to the Shizuoka Local Meteorological Office, some areas will experience heavy rain with thunder into Monday afternoon. It also forecasted cumulative rainfall of 500 millimeters and said there was a risk of mudslides even in areas experiencing lower levels of rainfall.

In Tokyo, the central government, which set up a task force at the prime minister's office Saturday, continues to monitor the situation.

Prime Minister Yoshihide Suga ordered relevant Cabinet ministers to work closely with the local government to protect the people while taking extra care over another disaster.