A video posted on Twitter showed dark water mixed with soil and sand flowing rapidly from the top of a mountain at about 10:30 a.m. in Atami, Shizuoka Prefecture, and making a rumbling sound. 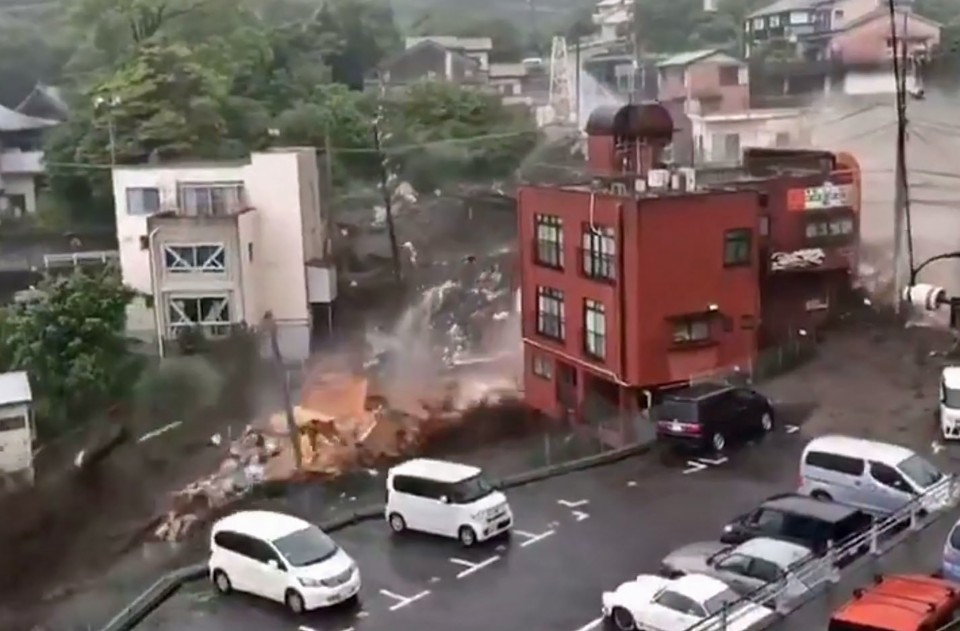 Screenshot of a video clip from a Twitter account shows a large mudslide in Atami, Shizuoka Prefecture, on July 3, 2021. (Kyodo)

The mudslide has washed down soil about 2 kilometers and reached the nearby coast, according to the authorities. The two women discovered by the coast guard at a port without showing vital signs were later confirmed dead, the municipal government of Atami said.

Around 21,000 households in Atami, home to a number of hot spring resorts, were ordered to evacuate as the city government issued the highest level of alert due to high risk of sediment-related disasters. Up to 300 households were affected by Saturday's mudslide, Mayor Sakae Saito told reporters.

"I've lived here for about 60 years but this is my first experience," said 70-year-old Masaru Isei, who lives about 50 meters from where the mudslide occurred.

He heard what sounded like heavy rain at around 10:45 a.m. When he opened a window on the second floor of his house he saw that his storage shed had been swept away and that a car in the parking lot was sinking in soil. He then left with his wife for an acquaintance's house on higher ground taking only his smartphone and wallet.

An 84-year-old man first noticed a rotting smell. When looking upstream of a nearby river, he saw a huge amount of soil and sand about 5 meters high moving toward him. 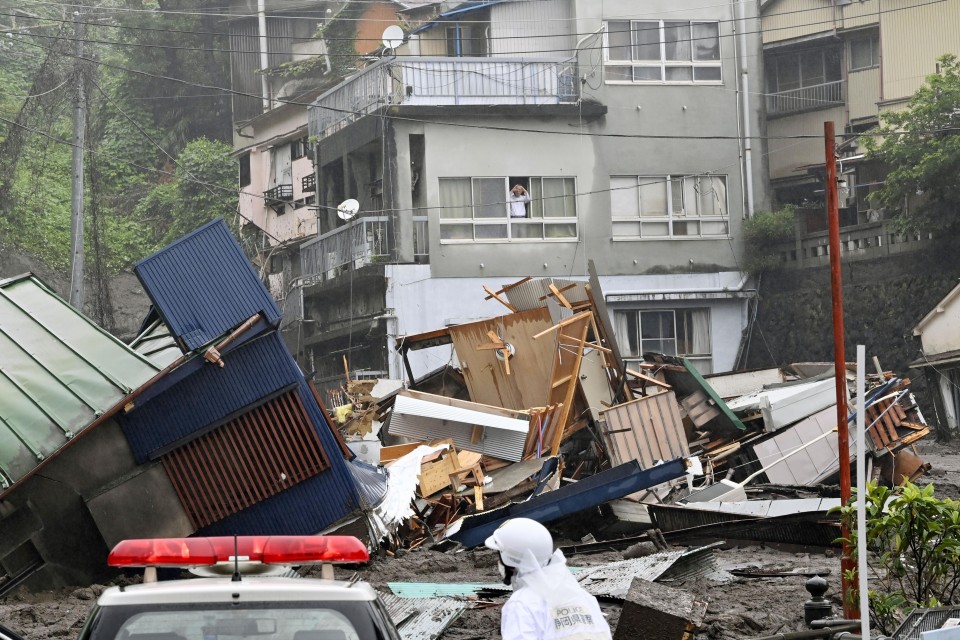 A person (top C) yells for help from inside a building near houses destroyed by a rain-triggered mudslide in the Shizuoka Prefecture city of Atami, southwest of Tokyo, on July 3, 2021. (Kyodo) ==Kyodo

The river, usually less than 2 meters wide, was overflowing with the mixture and had swollen to several dozen meters wide, he said.

The speed of the mudslide is estimated to have been around 40 kilometers per hour, said Motoyuki Ushiyama, a professor at the Shizuoka University Center for Integrated Research and Education of Natural Hazards.

The site is in a sediment disaster warning area, Ushiyama said. It had been raining heavily in Shizuoka for some time. 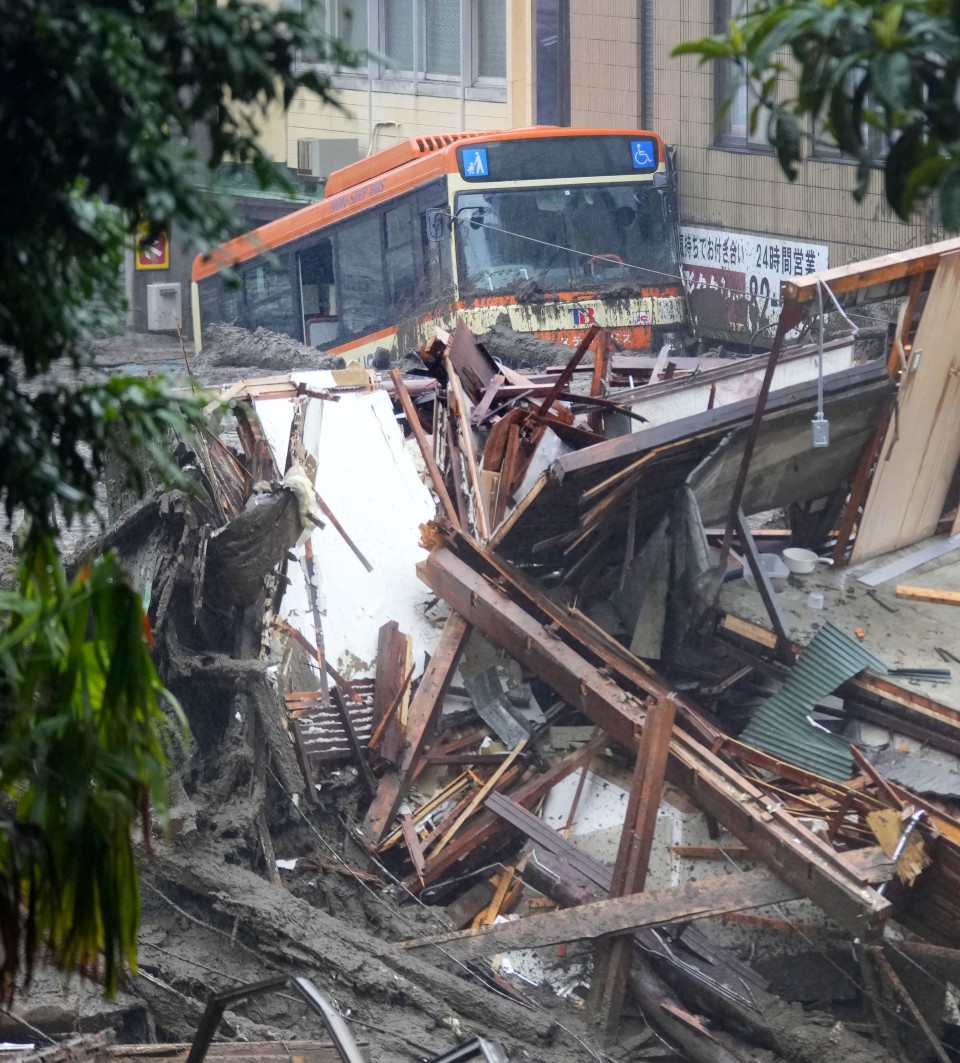 A bus is washed away by a rain-triggered mudslide in the Shizuoka Prefecture city of Atami, southwest of Tokyo, on July 3, 2021. (Kyodo) ==Kyodo

Fumitoshi Imaizumi, a professor of erosion control engineering at Shizuoka University, said the area is prone to mudslides due to volcanic sediment accumulating on slopes.

"The total amount of rainfall in the area was quite heavy, so it created conditions for (mudslides) to occur," he said.

Rescue workers are searching for those missing. They also received about 10 calls from people trapped in their houses due to the mudslide.

The Ground Self-Defense Force dispatched around 30 personnel to the area in response to a request from the prefectural government. 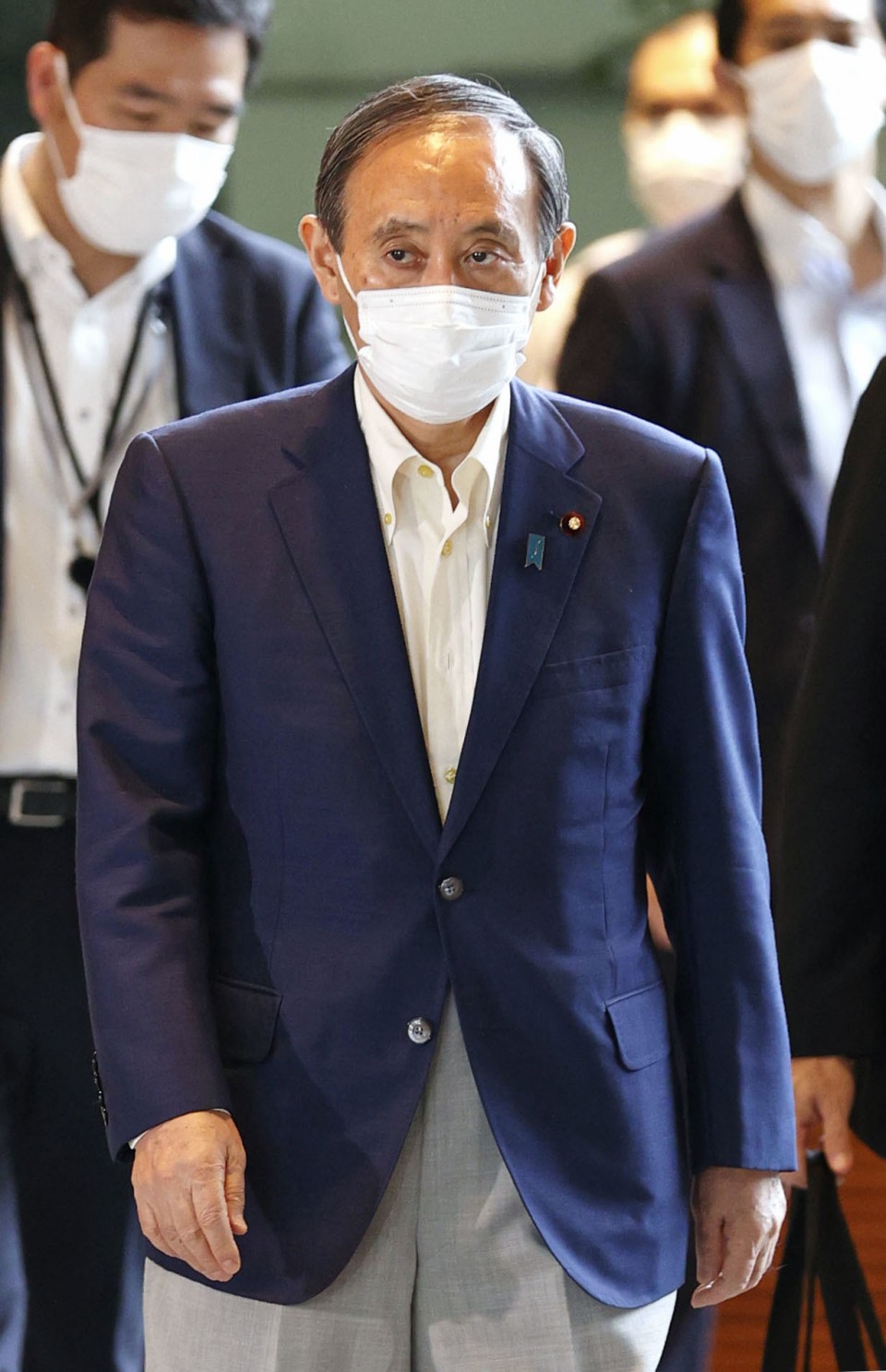 Prime Minister Yoshihide Suga called an emergency meeting with members of his Cabinet in the evening, instructing them to work with local authorities on ascertaining the damage and their needs, and calling on the public to be ready to possibly evacuate and "take action to protect your lives."

The government has set up a task force at the prime minister's office to collect information as heavy rain swept areas along the Pacific coast in central and eastern Japan.

The Japan Meteorological Agency urged maximum caution and called on the public to be vigilant over mudslides, flooding and swollen rivers.

In the 72-hour period through 11 a.m. Saturday, 790 millimeters of rainfall was recorded in Hakone, Kanagawa Prefecture, and over 550 mm logged in Gotemba, Shizuoka Prefecture, the agency said. 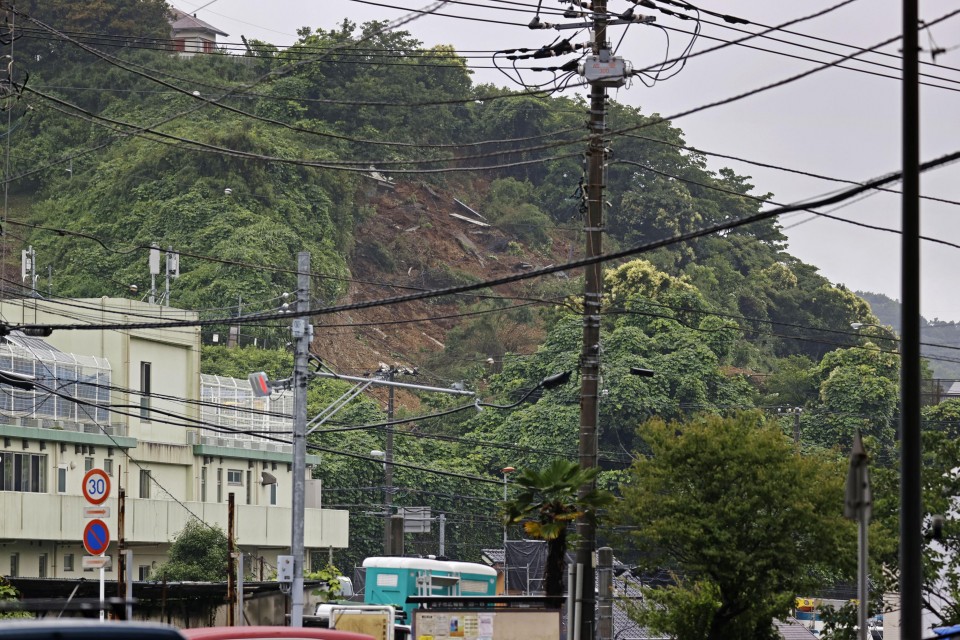 Prefectural governments from Ibaraki in the east to Kyoto in the west have issued warnings to residents about sediment-related disasters.

The seasonal rain front is forecast to move over the weekend toward the Sea of Japan coast, with wide areas there expected to see torrential rain through Monday.

Rebuilding hampered by virus in Kumamoto 1 month after heavy rain