Russian gymnasts won the women's team event on Tuesday beating the two-time defending champions the United States competing in most of the event without superstar Simone Biles due to a "medical issue," while hosts Japan finished fifth.

The Russians amassed a four-round total of 169.528 at Ariake Gymnastics Centre, 3.432 ahead of the United States. Britain took bronze with 164.096. The four-member Japan squad scored 163.280, behind fourth-place Italy. 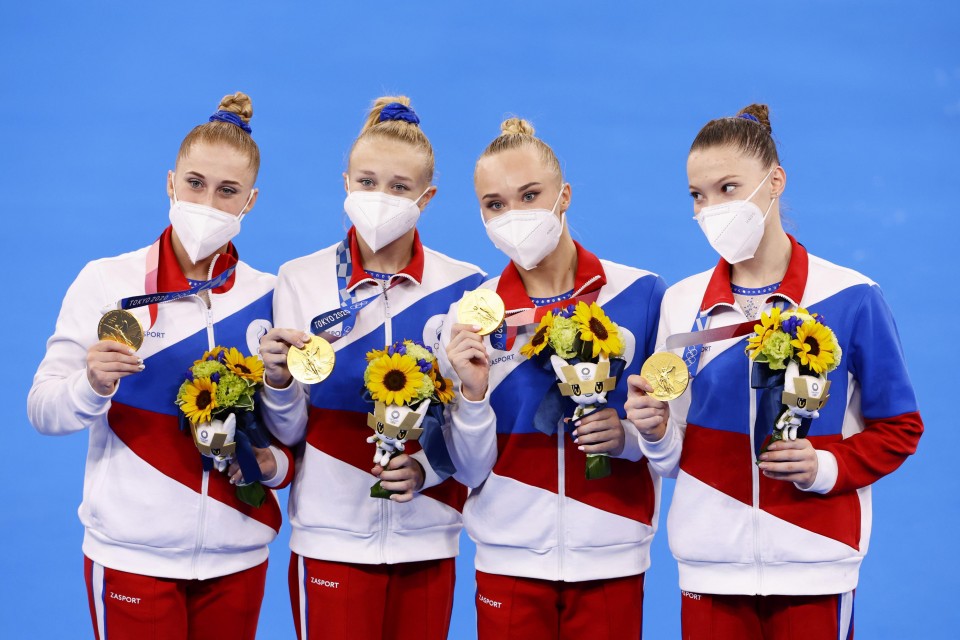 Russian gymnasts pose for a photo with their gold medals after winning the women's team event at the Tokyo Olympics on July 27, 2021, at Ariake Gymnastics Centre in Tokyo. (Kyodo)

The Russians, competing under a neutral flag, completed a sweep of the men's and women's team events at the Tokyo Olympics, held following a one-year postponement.

Biles, who won four golds at the Rio de Janeiro Olympics and is considered by many to be the greatest of all time, withdrew after the first rotation in which she made an uncharacteristic error on the vault and scored just 13.766 points.

The 1.42-meter 24-year-old made a large hop on her landing after she bailed out of the high-difficulty routine she had planned.

The Russians dominated from the beginning and never relinquished the lead. The United States narrowed the gap after the third rotation -- when two Russians slipped off the balance beam, but the defending champions were not able to win their third straight gold.

The Japanese team of Hitomi Hatakeda, Aiko Sugihara, Yuna Hiraiwa and Mai Murakami did manage to improve in the final after posting the lowest qualifying score of the eight teams to reach Tuesday's medal competition.

They were in fourth place behind Italy and in contention for bronze before Great Britain came from behind in the final rotation.

While ace Murakami had Japan's highest score in the vault and balance beam and floor exercise, she almost fell on the uneven bars.

"Looking at the score difference with third-place (Britain), I just wonder (what would have happened) if I didn't make the mistake on the uneven bars," she said. "I really regret it as the captain."

The men's individual all-around competition will take place on Wednesday, followed by the women's on Thursday.