The Tokyo Olympics will be held without spectators at all venues in and around the Japanese capital due to a spike in coronavirus infections, organizers said Thursday after making the unprecedented decision just two weeks ahead of the opening of the global sporting showpiece.

The announcement, abandoning their earlier plan to stage the Olympics in front of a limited number of fans, came after the government decided to put Tokyo under another state of emergency until Aug. 22, amid rising concern the games could wreak havoc on people's health.

In addition to Tokyo, the Olympics will be held behind closed doors at venues in Chiba, Kanagawa and Saitama, three prefectures near the capital, the organizers said. Some other venues of the Olympics are located outside the metropolitan area.

The new policy of barring spectators in the host city was agreed on during a virtual meeting attended by International Olympic Committee chief Thomas Bach and representatives of the four bodies, the games organizing committee, the International Paralympic Committee, as well as the Japanese and Tokyo metropolitan governments.

"It is extremely regrettable that the games will be staged in a very limited manner in the face of the spread of novel coronavirus infections," Seiko Hashimoto, president of the organizing committee said. "I am very sorry for ticket holders and local residents who were looking forward to the games."

Photo taken on July 8, 2021, shows the National Stadium ahead of the July 23 opening ceremony of the Tokyo Olympics. (Kyodo) ==Kyodo

Venues in Fukushima and Miyagi in northeastern Japan and Shizuoka in the center of the country will admit up to 10,000 spectators.

Meanwhile, Ibaraki, northeast of Tokyo, will bar general spectators but will allow students to enter the stands as part of school programs. The northernmost main island of Hokkaido is still considering its policy, the organizing committee said.

At the outset of the online meeting, which was open to the press, Bach said he and IPC chief Andrew Parsons continue to be "committed" to delivering the games safely with the Japanese organizers.

"We have shown this responsibility since the day of the postponement," Bach said. "And we will also show it today, and we will support any measure which is necessary to have a safe and secure Olympic and Paralympic Games for the Japanese people and all the participants."

The organizers will decide on how many spectators will be allowed at Paralympic venues after the Olympics close on Aug. 8. The Paralympics will take place between Aug. 24 and Sept. 5.

Even with the decision, it is still uncertain what the Olympics will look like after they begin July 23 following a first-ever postponement last year due to the coronavirus pandemic, despite the organizers' repeated pledges to stage a "safe and secure" games.

For months, the organizers have struggled to turn public opinion in favor of going ahead with the games, while some Japanese continue to call for them to be canceled.

Toshiro Muto, CEO of the organizing committee, said officials including those of the IOC will still be permitted to enter venues subject to the no-spectator policy.

He added they will review the number of health care workers and volunteers who were initially expected to assist spectators.

Having already barred Olympic spectators from overseas, the five organizers decided late last month to allow the venues' capacity to be filled up to 50 percent, a maximum of 10,000 people per venue, on the assumption the COVID-19 situation in Tokyo would turn for the better supported by Japan's belated vaccination rollout. 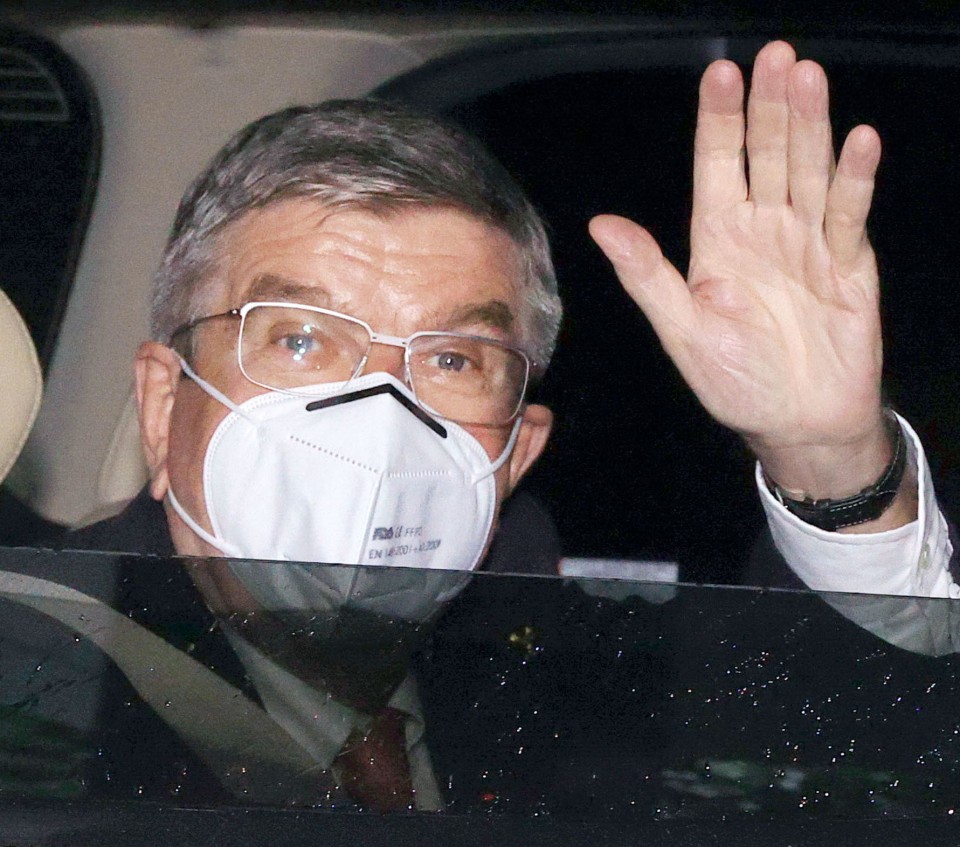 International Olympic Committee President Thomas Bach waves from inside a vehicle at a Tokyo hotel on July 8, 2021, following his arrival in Japan ahead of the July 23 opening ceremony of the Tokyo Olympics. (Pool photo) (Kyodo) ==Kyodo

After Tokyo started to reel from a COVID-19 rebound, the Japanese government and the organizing committee once planned to lower the spectator cap to 5,000.

However, Tokyo on Wednesday reported 920 new infections, registering the highest daily count since mid-May, while medical experts continue to warn of the dangers of going ahead with the games when many countries are grappling with the rapid spread of the highly contagious Delta variant of the virus.

On Thursday, Tokyo reported 896 new cases of the virus, exceeding the number logged a week earlier for the 19th straight day.

Since pushing back the games in March last year, the government had been hoping that having as many spectators as possible and inbound visitors to the country would help revive its economy from a coronavirus-induced downturn.

Not allowing fans in Tokyo will also deal a heavy blow to the organizing committee, which initially projected the ticket revenue to be 90 billion yen ($820 million).

The organizing committee sold 4.48 million tickets for the Olympics before the pandemic. Having already accepted applications for refunds last year, it was trying to further reduce the number of tickets to about 2.72 million through a lottery.

Bach took part in the five-party meeting from his hotel after arriving in Tokyo earlier in the day.

He will quarantine at his hotel before he is set to visit the athletes' village in Tokyo's Harumi waterfront district and hold meetings with the organizing body, both in person and remotely.

Bach may also visit Hiroshima, which was devastated by a U.S.-dropped atomic bomb in World War II, on July 16, the starting day of an Olympic truce adopted by the United Nations, in an effort to showcase the games as a symbol of peace.