Gone are the days when Japan was dominant in semiconductor and battery production, industries that are increasingly relevant in the modern world.

The need to decarbonize the economy in line with global climate change efforts is serving as a wake-up call to Japanese manufacturers -- as well as the government -- forcing them to rise to the challenge of bolstering sectors that will be critically important to Japan meeting its emissions commitments while finding a competitive edge. 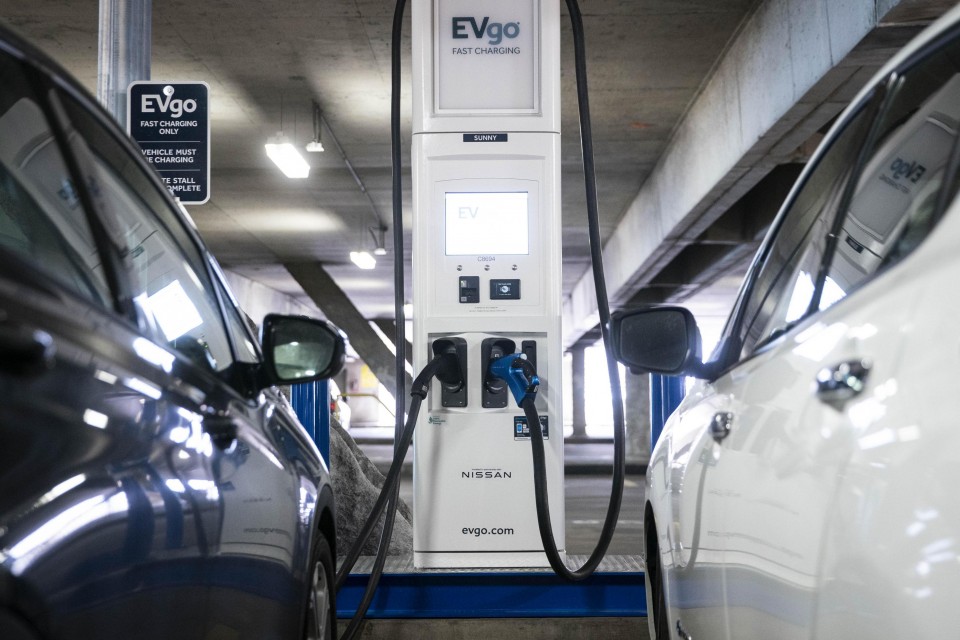 An electric vehicle charging station is pictured in the parking garage of Union Station in Washington in April 2021. (UPI/Kyodo)

Losing the race would deal a serious blow to Japan at a time when automakers, the backbone of the country's manufacturing base, are putting more electrified vehicles on the market, which will require more semiconductors and high-performing batteries.

The global chip shortage seen since late 2020 is a reminder that robust supply chains and longer-term procurement strategies hold the key to success in what is set to become an even more competitive market over the longer term, analysts say.

"Japan is far behind China and South Korea in the field of batteries for car use. I'm concerned that we will see a repeat of what happened to the domestic semiconductor and solar panel industries," said a member of a government panel on carbon neutrality in the auto sector.

"Strong investment support by the government is necessary for the whole supply chain, from manufacturing batteries to recycling them," he said.

Japanese automakers have announced their own plans to contribute to reaching the carbon neutrality target in 2050, which major economies like Japan, the European Union and the United States set as their goal.

Toyota Motor Corp., the leader in hybrid and hydrogen-powered fuel cell vehicle development, is aiming to sell 8 million electrified cars globally in 2030, about quadruple the current figure and equal to around 80 percent of the automaker's current annual sales.

Nissan Motor Co., which rolled out its first mass-market all-electric vehicle, the Leaf, a decade ago, is planning to make all new cars introduced in key markets electrified by the early 2030s.

Honda Motor Co., too, is going electric intending to make EVs and FCVs account for 100 percent of sales in 2040. It is the first Japanese automaker to have pledged to completely phase out gasoline-powered vehicles.

"It's a challenging target," Honda's new CEO Toshihiro Mibe said in April when he announced the automaker's plan. "We will strive to take a 'local consumption of what is locally produced' approach in Japan to batteries, which will help the growth of the domestic industry," Mibe said.

Globally, there has been a gradual take-up of EVs over the years with around 10 million vehicles on roads at the end of 2020, according to International Energy Agency data.

Europe overtook China as the world's largest EV market, supported by stricter CO2 emission standards and government incentives. But Japan's EV market has contracted since 2017 when 54,000 registrations were made.

"For Japanese automakers, the difficulty lies in the fact that EVs are not so popular domestically but they also need to develop and market them overseas," said Saeki, who specializes in strategic management and is well-versed in matters concerning EVs.

For months, global automakers have been grappling with the semiconductor shortage, which has led them to reduce output.

Semiconductors are used in everything from smartphones and laptops to cars and demand is expected to continue increasing as more and more "internet of things" devices are connected and a shift toward autonomous driving and electrification continues in the auto industry, analysts say.

Securing stable supplies of critical components like semiconductors has become a national security issue as China, the United States and the European Union are also sharpening their focus on the industries.

Fostering the domestic chip and battery sectors is one of the key themes in the Japanese government's growth strategy, to be approved in June.

Suppliers of materials and parts for batteries, battery manufacturers and automakers, including Nissan and Honda, have already formed an association to secure stable supply chains.

The group's launch in April reflects growing alarm that Japan will be left behind in the global battery race as competitors in China and Europe, among others, receive more state support.

Companies in the battery business also say the cost of electricity, a key issue in the battery manufacturing process, is high and dependence on energy derived from fossil fuels, rather than renewables, undermines competitiveness relative to foreign rivals.

Lithium-ion batteries that are currently used in EVs have multiple challenges, including cost and the limited range of travel they permit per charge. The securing of key natural resources such as lithium, cobalt and nickel needed for such batteries is also among them. Cobalt is mainly produced in the Democratic Republic of the Congo where political instability is a concern and prices have surged due in part to massive buying by China, industry watchers say.

Some are already racing to get ahead of the game with Panasonic Corp., a supplier to EV giant Tesla Inc. and a rival to Contemporary Amperex Technology Co. of China, known as CATL, seeking to develop a cobalt-free battery.

Automakers like Toyota and Nissan are developing solid-state batteries that are hoped will have higher energy density, extending range and improving safety of electrified vehicles. Solid-state batteries can replace liquid electrolytes used in lithium-ion batteries and are seen as a major breakthrough.

"With respect to all solid-state batteries, we are still in the process of developing one and we are making efforts to speed it up," Okada told a recent briefing.

Kansai University's Saeki, who has conducted research on Tesla, said the electrification drive is set to transform the business structure of the auto sector and lead to the restructuring of supply chains.