By setting the "ambitious" target, Japan is "ready to demonstrate its leadership for worldwide decarbonization," Suga said at a virtual summit on climate change hosted by U.S. President Joe Biden. 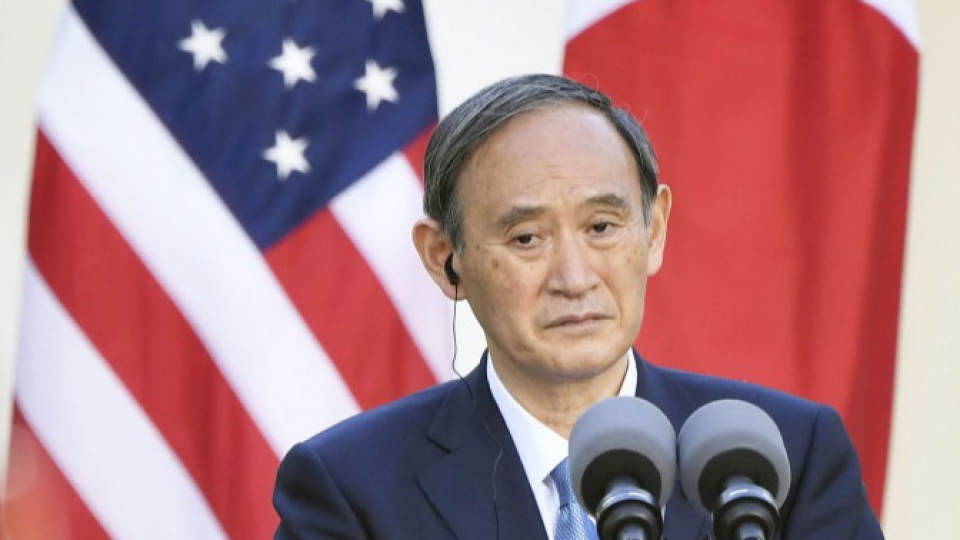 Japanese Prime Minister Yoshihide Suga listens to a question from a reporter during a joint press conference with U.S. President Joe Biden at the White House in Washington on April 16, 2021. (Kyodo) ==Kyodo

Japan had been reviewing its emissions reduction goal to be more in line with Suga's pledge to achieve carbon neutrality by 2050, looking to reduce its reliance on fossil fuels and shift to renewable energy such as wind and solar.

Vowing to create a "virtuous cycle" of economic growth and protecting the environment, Suga said that in the longer term the country will work toward slashing emissions by 50 percent.

Suga and Biden agreed at a meeting last Friday in Washington to cooperate on climate change by implementing the 2015 Paris Agreement, which seeks to keep the rise in global average temperature to 1.5 C above pre-industrial levels, promoting clean energy, and supporting decarbonization in the Indo-Pacific region.

Japan has been under pressure not to fall behind other advanced countries in addressing the issue, particularly ahead of key international gatherings to be hosted this year by Britain -- a Group of Seven summit in June in Cornwall and a U.N. climate change conference, also known as COP26, in November in Glasgow.

The United States said Thursday it will reduce its greenhouse gas emissions by 50 to 52 percent from 2005 levels by 2030, nearly double its previous target.

Japan has increasingly turned to fossil fuels such as oil, coal and liquefied natural gas as most of its nuclear reactors were taken offline following the 2011 earthquake and tsunami, relying on them for about 85 percent of its energy needs.

Under its Strategic Energy Plan, the country seeks to increase its share of renewable energy from around 17 percent in fiscal 2018 to between 22 and 24 percent by fiscal 2030. Japan's fiscal year begins in April.