Awaiting its Olympic debut in Tokyo this summer, skateboarding has become increasingly popular in Japan as an outdoor activity one can enjoy while social distancing during the coronavirus pandemic, but the sport's surge has not been without trouble.

Cases of skateboarders riding in public spaces without permission or damaging cultural assets have become frequent across Japan, with many of the incidents caused by novices who may be unaware of the rules. 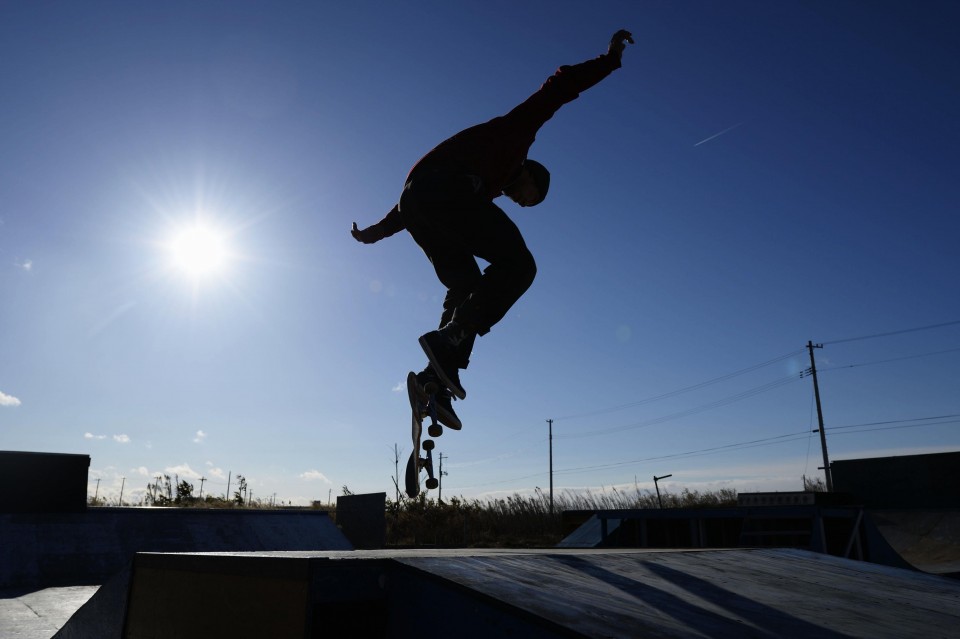 Along with this, certain areas, particularly near stations and major business and shopping districts, have seen more and more young skateboarders gathering at night and getting into scrapes with pedestrians or causing noise disturbances.

Authorities are aiming to promote public awareness about the sport and crack down on those who flout the rules.

In central Japan's Aichi Prefecture, a recorded announcement on the second-level pedestrian concourse of JR Toyohashi Station repeatedly warns people against skateboarding and other prohibited activities, with the message reinforced with explicit "No skateboarding" signs.

His officers attended to 27 skateboard incidents between January and March. In January, four youngsters were written up for violating traffic laws after repeatedly ignoring warnings about riding on a public road.

The law specifically prohibits roller skating or similar conduct on roads with frequent traffic, but the police said the ambiguity of the word "frequent" makes it difficult to charge violators because of its broad interpretation.

Boarders have also been involved in damaging cultural property on public land, where entry is prohibited for purposes other than what is intended.

For example, planking was damaged on the iconic five-arched wooden Kintai Bridge -- a national site of scenic beauty -- in Iwakuni in Yamaguchi Prefecture, western Japan, in January.

A case against the skateboarder for allegedly violating the cultural properties protection law has been sent to prosecutors. The city, meanwhile, has installed more security cameras.

In November last year, cases against four men were sent to prosecutors alleging minor offenses for skateboarding in prohibited areas of a business district in the vicinity of Yokohama station. 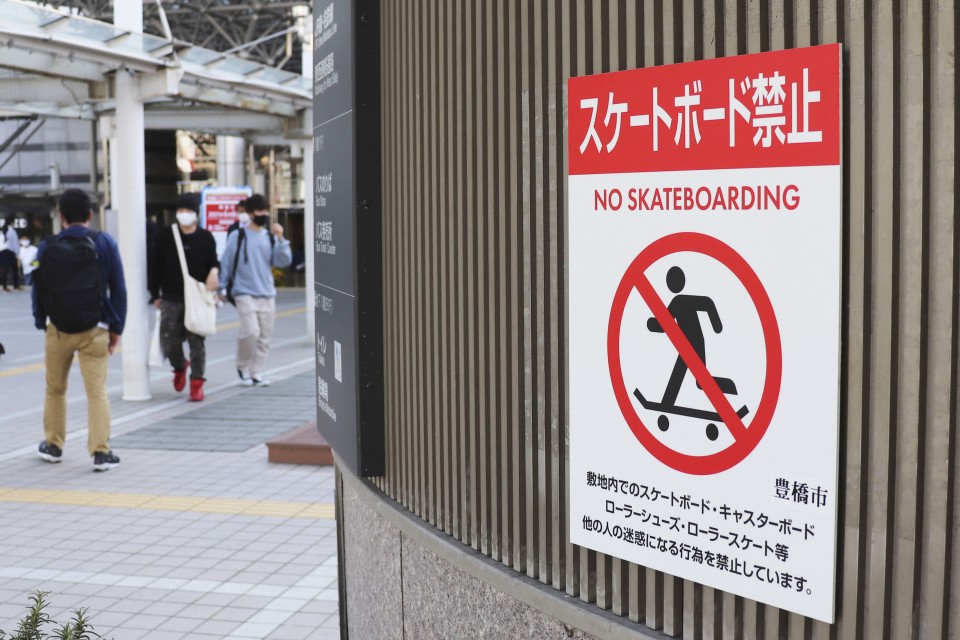 This photo taken April 2, 2021, shows a sign at JR Toyohashi Station in the Aichi Prefecture city of Toyohashi, central Japan, prohibiting skateboarding on the premises of the station. (Kyodo) ==Kyodo

The four, a 21-year-old hairdresser and three 20-year-old college students, admitted to the offenses, saying they thought the area in the central business district of Minato Mirai was somewhere they could "practice as much as we like."

According to police, around the same time, young skateboarders had started gathering around Yokohama station at night, causing frequent trouble such as colliding with passers-by and making noise. Since August last year, police have posted no trespassing signs aimed at skateboarders and increased surveillance.

"It's troubling if everyone thinks it's okay to skateboard anywhere they wish," said an official from a park in Tokyo's Koto Ward, where wooden decks and benches have been damaged. "Children play here too, so it's also worrying from the standpoint of safety."

A 27-year-old man who hones his skills inside a park in Nagoya, Aichi, where skateboarding is permitted, said rules on where the sport is allowed are too ambiguous.

"For example, I'm honestly not sure if I'll be charged for skateboarding from here to the station," he said. "It'd be good if it were clearer where we can enjoy riding."

Amid the confusion, All Japan Skateboard Association Secretary-General Jun Yokoyama opines that the increase in incidents is related to more novices taking up the sport as a consequence of the Tokyo Games and the pandemic. He emphasized the need to educate beginners.

"In competition, we can compel participants to abide by tournament rules, but beginners have few opportunities to receive training in the laws that affect them," he said.