If approved, Johnson & Johnson said its vaccine could be delivered to Japan in early 2022, becoming the fourth vaccine in the fight against COVID-19 in the country, which is lagging behind other nations in its vaccine rollout.

According to the unit, Janssen Pharmaceutical K.K., its Phase 1 study results from 250 healthy people between the ages of 20 and 55 and those aged 65 or older in Japan showed that the one-shot vaccine did not pose safety risks. 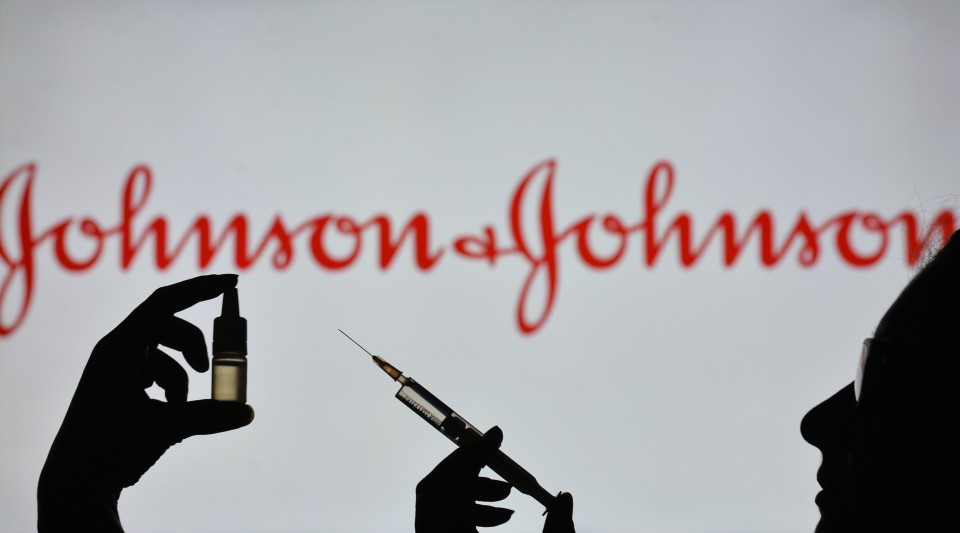 Photo illustration shows a silhouette of a man holding a medical syringe and a vial seen displayed in front of the Johnson and Johnson logo on a screen. (SOPA Images/LightRocket/Getty/Kyodo)

Overseas clinical trials have shown that the vaccine, which is recommended by the company for adults, had an efficacy rate of 66 percent for preventing moderate to severe COVID-19 and was 85 percent effective in preventing severe disease.

"An increase in vaccine choices is desirable," Chief Cabinet Secretary Katsunobu Kato said at a press conference, adding that the approval process is expected to be rapidly carried out, with priority on confirming the vaccine's efficacy and safety.

The Japanese government granted fast-track approval Friday for the coronavirus vaccines developed by U.S. pharmaceutical company Moderna Inc. and Britain's AstraZeneca Plc that are administered in two shots, similar to the vaccine by Pfizer Inc., which was already approved.

The efficacy rates for preventing COVID-19 overall stand at 94 percent for Moderna's vaccine, 95 percent for Pfizer's and 70 percent for AstraZeneca's.

The Johnson & Johnson vaccine and the AstraZeneca one can be stored in refrigerators between 2 and 8 C, making them easier to handle than the others that must be kept in freezers.

Rare cases of blood clots with low levels of platelets in individuals who received the Johnson & Johnson shot prompted a pause in its rollout overseas, including in the United States which resumed its use in April after finishing a safety review.

The Japanese government, which has not signed a supply agreement for the Johnson & Johnson vaccine so far, has yet to decide when and to which age groups the shots would be offered.

Use of the AstraZeneca vaccine has been postponed following reports of blood clots in people who received it, as the government considers parameters such as recipients' age.

Japan is currently battling a fourth wave of infections as it attempts to speed up its inoculation drive.

The country's vaccination program started in February with health care workers and later expanded to the elderly, who total about 36 million people. But only around 4 percent of the country's population of 126 million has received at least one vaccine dose.