Tokyo police arrested Kosuke Koyama on Sunday on suspicion of using 39 images taken from a sports TV program without the broadcaster's permission and putting them on the site around May 18, 2019. The images were accompanied by sexually explicit comments. 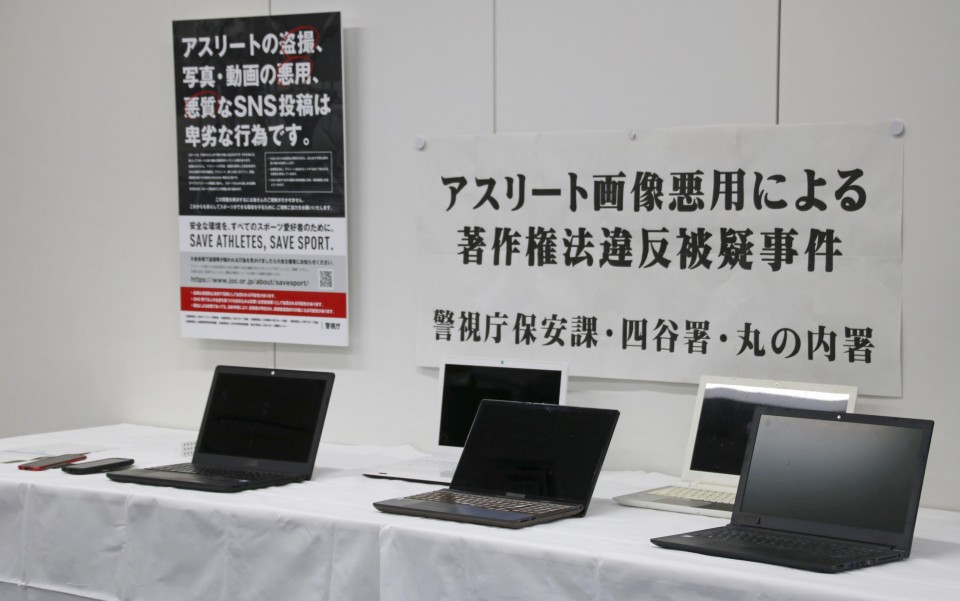 This photo shows laptops and smartphones confiscated by the Metropolitan Police Department and displayed at a police station in Tokyo on May 11, 2021. (Kyodo)

The suspect was quoted by the police as saying during voluntary questioning that he knew what he had done was wrong, but did not expect to get caught. He has remained silent since his arrest.

Widespread sharing of photos and videos taken of female athletes, often without their knowledge and in a sexualized context, has been garnering attention as a social problem, with more victims speaking up. Victims have also included high school athletes.

The Metropolitan Police Department said this is their first arrest based on information gathered by the Japanese Olympic Committee regarding athletes' photos distributed without their consent for use in sexually titillating ways.

The JOC has informed the department of around 1,000 instances since November last year, among which four involved Koyama's websites.

It is difficult to take legal action since there is no law against nonconsensual filming or photographing in Japan, and such acts, including taking images of people in nude or sexual situations, are only punishable under nuisance-prevention ordinances set by prefectural governments.

In August last year, former national team athletes complained to the Japan Association of Athletics Federations that photos zooming in on breasts and buttocks were taken during competitions and shared on social media.

In November, the Japanese Olympic Committee and six other sporting bodies condemned nonconsensual capturing and sharing of sexualized images of athletes, calling it a "despicable act" in a statement, and asked for the government to look into the issue.

Calling such behavior sexual harassment, the organizations also warned that nonconsensual distribution of such images may be punished as a crime, and be the object of damages claims.

Call centers they set up to collect information on the distribution of athletes' sexually suggestive images had received around 1,000 reports by Monday.