Kyoto University Hospital said Thursday it has performed the world's first living donor lung transplant on a patient who lost functionality of both her lungs due to infection from the novel coronavirus.

The operation, which took around 11 hours to perform, transplanted part of healthy lungs from the patient's husband and son to replace her failing lungs. Both donors are in stable condition, and the patient, who is currently in intensive care, is expected to be discharged in two months if all goes well, the hospital said. 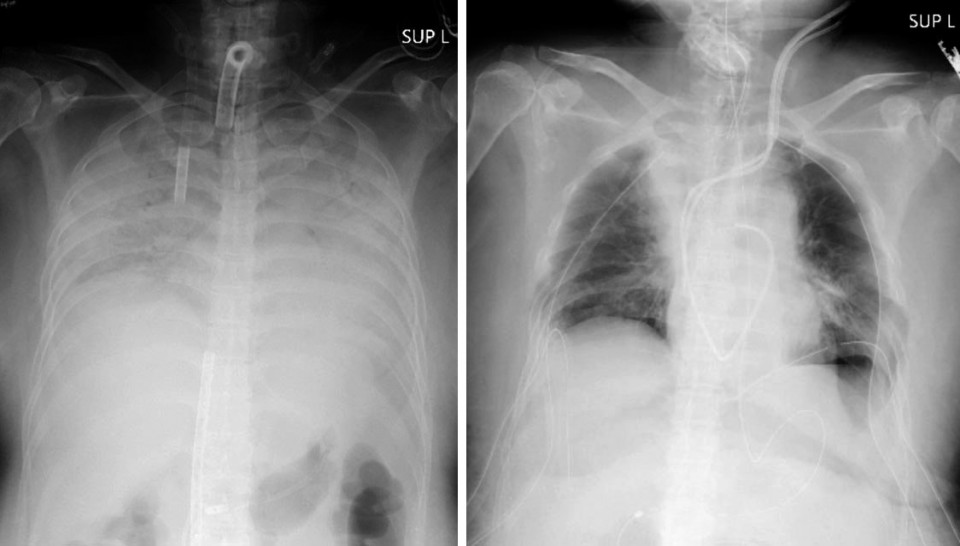 Supplied X-ray images show the chest area of a COVID patient who suffered lung damage before (L) and after a transplant operation (R). The dark areas indicate the transplanted lungs. (Photo courtesy of Kyoto University Hospital)(Kyodo)

According to the hospital, while dozens of lung transplants to treat damage after COVID-19 infection have been performed using organs from brain-dead donors in China, the United States and Europe, the waiting period for patients can be as long as two and a half years in Japan, where there are few such donors.

After it was determined that the woman in this case had no hope of recovery and only a lung transplant could save her life, her husband and son offered to donate part of their lungs. The surgery went ahead after both acknowledged the risk of decreased lung capacity on their part.

There are usually restrictions on who can undergo such transplants based on age and physical condition, with the operation limited to the elderly and those with underlying illnesses in the case of damage from COVID-19.

But professor Hiroshi Date, a thoracic surgeon who was in charge of the operation, said, "I think there is a lot of hope for this treatment in the sense that it creates a new option."

The woman's husband and son have expressed gratitude and joy over the successful lung transplant, the hospital said.

The woman, who lives in western Japan, had no pre-existing medical conditions but her respiratory function deteriorated rapidly after she was infected with the coronavirus at the end of last year. She developed pneumonia and that caused both her lungs to harden and shrink, destroying most of their functionality.

The hospital deemed that the infection risk to medical staff had sufficiently decreased after at least two months had passed since she received a negative result in a polymerase chain reaction, or PCR, test.

The woman was admitted to the hospital on Monday while connected to an artificial heart-lung device known as extracorporeal membrane oxygenation, or ECMO, and underwent a transplant of part of her husband's left lung and part of her son's right lung two days later.