Just over 60 percent of people in Japan are dissatisfied with the progress of the COVID-19 vaccine rollout that is trailing many developed countries, a Kyodo News poll showed Monday, with a little more than 100 days to go before the opening of the Tokyo Olympics.

The figure of 60.3 percent in the nationwide telephone poll conducted over the weekend and on Monday compared with 36.5 percent who said they were satisfied. The country began inoculating about 36 million seniors aged 65 or older on Monday after beginning its campaign with health care workers on Feb. 17. 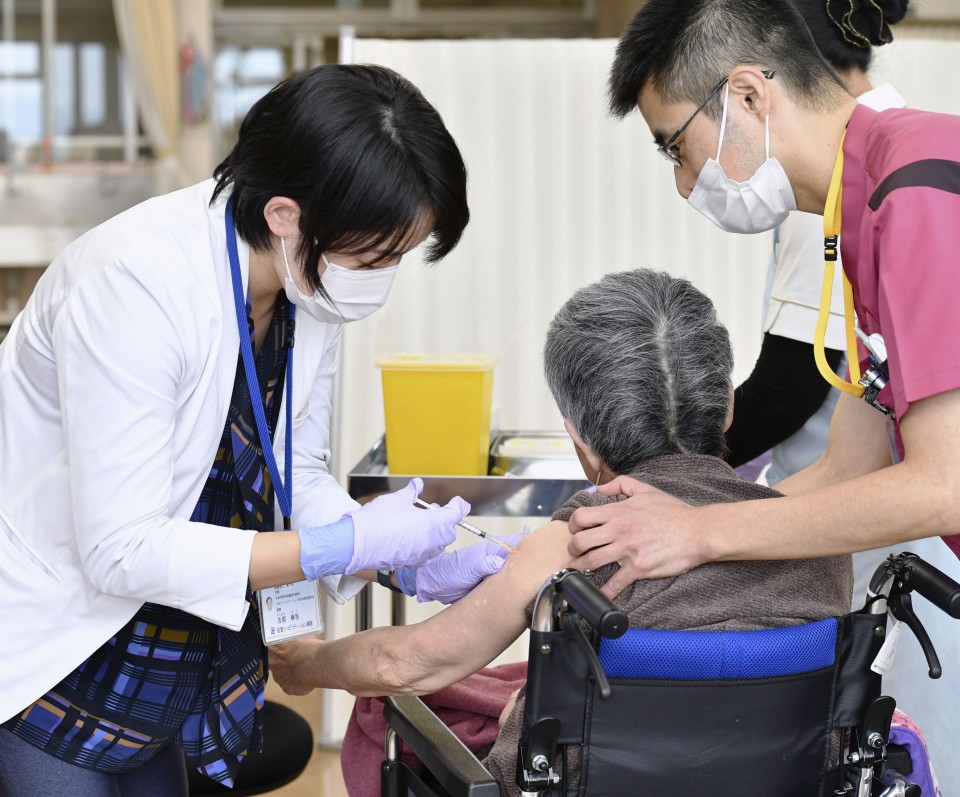 An elderly person is inoculated against the novel coronavirus at a nursery home in Saga, southwestern Japan, on April 12, 2021. (Pool photo) (Kyodo)

Out of the 4.8 million health care workers, those who had received at least one vaccine dose represented about 0.87 percent of the population as of Saturday, while the rate surpasses 10 percent in each of the other Group of Seven countries, including 47.15 percent in Britain, according to researchers at the University of Oxford.

In the poll, 92.6 percent said they feel anxious about a resurgence of novel coronavirus infections, with 56.5 percent disapproving of the government's handling of the pandemic and 35.9 percent expressing approval.

Amid lingering concern over a fourth coronavirus wave and the slow progress of vaccination, the poll found 39.2 percent believe the postponed Olympics and Paralympics should be canceled, while 32.8 percent think they should be rescheduled. Only 24.5 percent responded that the games should be held as scheduled.

The figures were almost the same as the previous survey in March.

The approval rating for Prime Minister Yoshihide Suga's Cabinet stood at 44.0 percent, up 1.9 percentage points from the previous survey. The disapproval rate declined to 36.1 percent from 41.5 percent.

The governors of Tokyo, Kyoto and Okinawa enhanced their responses to the coronavirus pandemic Monday amid a rebound in infections despite Japan having fully lifted a second COVID-19 state of emergency less than a month ago.

The governors followed Osaka and Hyogo prefectures in western Japan and Miyagi in the northeast in taking stronger steps under a quasi-state of emergency, including asking restaurants and bars in densely populated areas to close by 8 p.m.

The surge in virus infections has further raised skepticism about holding the games this summer and has also led the Olympic torch relay to be canceled in Osaka Prefecture. The relay was initially planned to take place on roads across the prefecture on Tuesday and Wednesday.

In the survey, only 13.2 percent said the torch relay, which started on March 25 in the northeastern prefecture of Fukushima, should continue until it passes through all of Japan's 47 prefectures before the Olympic opening ceremony on July 23.

On the best timing for the next general election that must be held by fall, 60.1 percent of respondents said at the end of the four-year term of House of Representatives members in October, while 25.7 percent said after the Tokyo Paralympics end in September and 7.1 percent said before the Tokyo Olympics open in July.

Suga said in a television interview earlier this month that he could call a snap election before his term as leader of the ruling Liberal Democratic Party ends on Sept. 30.

The most popular choice to be Japan's next prime minister was Taro Kono, the administrative and regulatory reform minister also in charge of vaccination efforts, who was favored by 20 percent of the respondents.