The number of boats believed to originate in North Korea that drifted ashore on Japanese coasts between last October and March fell 90 percent from a year earlier, the Japan Coast Guard said Thursday.

The number of such boats found in the six-month period totaled 13, down from 141 the previous year, the coast guard said. An expert on the Korean Peninsula situation said the plunge was believed to have been caused by the coronavirus pandemic. 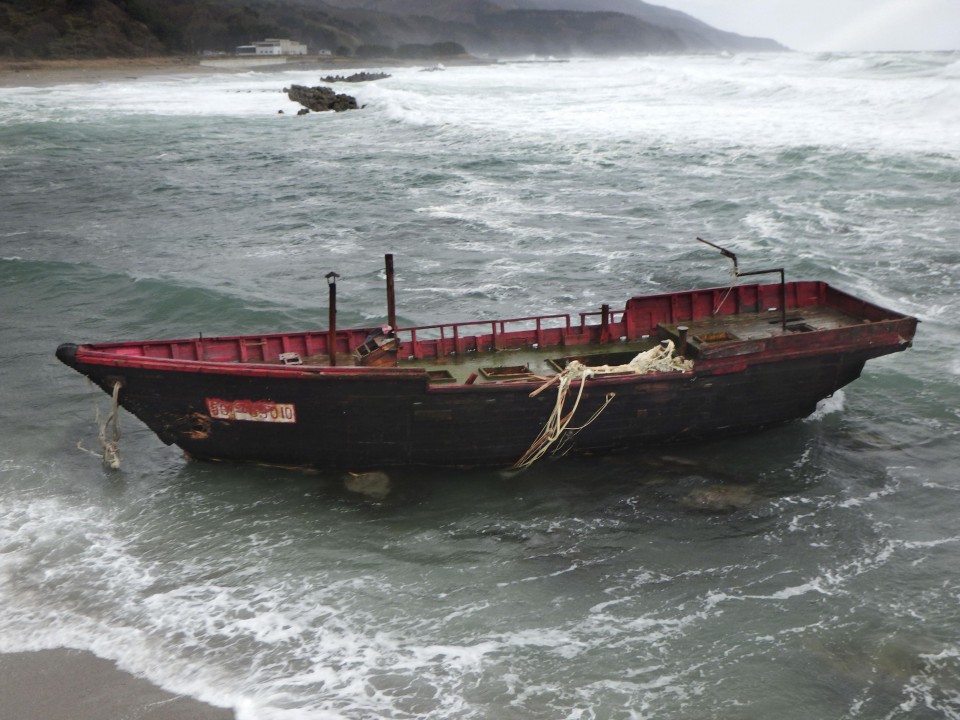 A boat believed to be from North Korea is washed ashore on the coast of Aomori Prefecture in Japan in November 2019. (Photo courtesy of Aomori Coast Guard Office) (Kyodo)

"It appears that North Korea, which wants to maintain thorough border controls against the novel coronavirus, is refraining from conducting illegal fishing operations in the Sea of Japan," said Yusuke Fukuyama, a professor at Hokuriku University.

Boats believed to be from North Korea are known to operate illegally in the Yamatotai area, which offers fertile fishing grounds for squid and other marine life and is located in Japan's exclusive economic zone, from summer to winter. They sell fish and shellfish to foreign ships at sea.

Most of the suspected North Korean boats are small and made of wood. When they are wrecked in typhoons or rough seas, they drift to Japanese shores due to seasonal northwesterly winds in the fall to winter. There have been a string of cases in which bodies of crew have been discovered in the boats.

The Japan Coast Guard counted boats believed to be from North Korea that washed ashore on Japanese coasts, judging from the wood used to build them and letters written on their hulls.

It counted separately segments of the same hull that drifted ashore at different places.

According to its tally, 219 suspected North Korean boats were found between October 2018 and March 2019 before the number fell to 141 in the following year.

If a Japan Coast Guard vessel spots an illegally operating foreign ship in the country's EEZ, it issues a warning and urges the ship to leave the area. If the foreign ship does not comply, the coast guard takes steps such as discharging water at it.

In 2019, the Japan Coast Guard issued such warnings to more than 1,300 vessels believed to originate from North Korea in and around the Yamatotai area, but in 2020 it confirmed zero cases of illegal fishing by such vessels.

Meanwhile, the coast guard is stepping up monitoring of illegal fishing by Chinese boats. While it warned 12 suspected Chinese boats to leave Japan's EEZ in 2019, alerts were aimed at 107 such boats in 2020.

"I believe China is actively fishing in Yamatotai because it appears the country has bought fishing rights from North Korea," Fukuyama said.

A Japan Coast Guard official said, "We will strictly deal with the situation by coordinating with patrol boats of the Fisheries Agency."