Over the southern hemisphere summer of 2019-2020, the world watched as eastern and southern Australia battled some of the worst bushfires the country has seen in generations.

Most of the fight took place on the mainland, but among the worst-hit areas was Kangaroo Island, home to a small community off the country's southern coast, where infernos burned through over half of its 440,000 hectares.

Kangaroo Island is famous for its native wildlife, including sea lions, koalas, and of course, kangaroos. But it is estimated that up to 90 percent of the island's previously 50,000-strong koala population was killed as the flames swept through eucalyptus plantations. 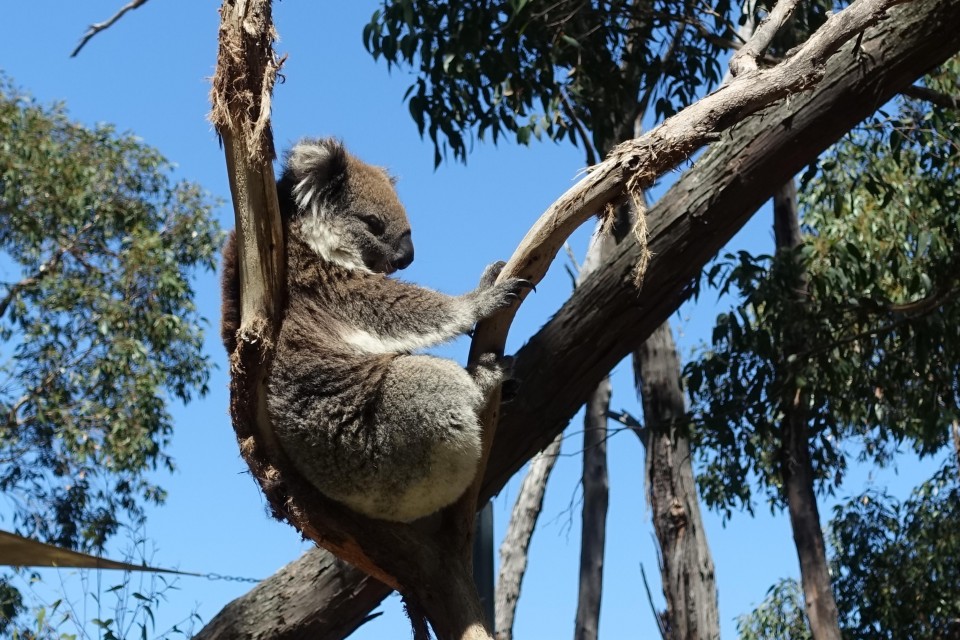 Photo taken March 4, 2021, shows a koala living on Australia's Kangaroo Island, near Adelaide. More than 41,000 koalas were killed or injured in the 2019-2020 fires that burned about half of the island. (Kyodo) ==Kyodo

Koalas in the Hanson Bay Wildlife Sanctuary fared better. Just over a year later, Jim Geddes points out a brown-grey, furry ball wedged in the fork of a eucalyptus tree in the car park of the wildlife sanctuary, located at the western and most severely damaged end of the island.

"Did you meet my Parking Inspector?" Geddes, the co-owner and founder of the wildlife sanctuary, said with a laugh.

With one burnt paw, the large male is among only a handful of wild koalas that survived the bushfires.

Geddes said roughly 99 percent of the over-2,000-hectare wildlife sanctuary was affected by the fire, which started from a lightning strike in the Flinders Chase National Park, just four kilometers down the road.

"Driving back through the burnt ground, just after the fire had gone through, not a building, or a car, or a living creature was there," said Andy Wood, Country Fire Service brigade captain and one of the commanders during the fires. "I've not seen devastation like that before."

In spite of the conditions, Geddes estimates only 30 percent of the koalas on his property were killed. However, the loss of bushland habitat meant survivors would struggle for food and shelter, while orphaned joeys would need extra human support. 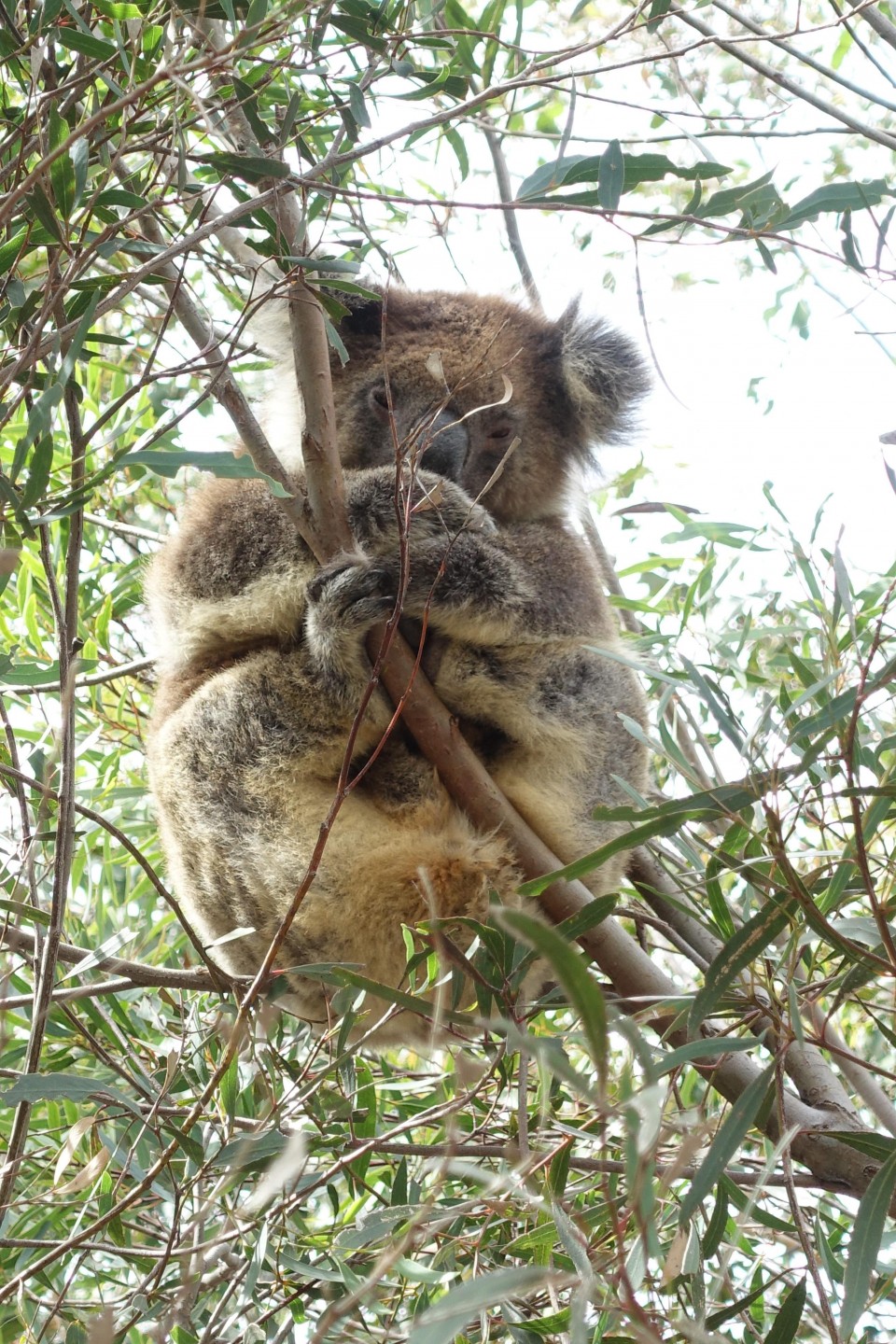 As a result, Geddes and his team decided to move 28 younger animals, whose chances in the wild were uncertain, to a wildlife park on the Australian mainland.

"It was sort of a bittersweet moment for us because they're going into captivity. But it was also very important and very historic because we did not know what the impact of the fire was going to be, long term, on the local koala population," he said.

The relocation of koalas to Cleland Wildlife Park on the outskirts of Adelaide, South Australia, is also historic for Australia's mainland koalas, whose populations are heavily affected by infectious and genetic diseases.

"Kangaroo Island is really important because it has animals that don't have two types of disease: chlamydia and retrovirus," explained Chris Daniels, the former director of Cleland Wildlife Park and CEO of Koala Life, a nonprofit organization dedicated to koala conservation and research.

Daniels says the fires on Kangaroo Island meant it "looked like the most important population of koalas in the country -- and therefore the world" -- could have been wiped out, so they made the quick decision to relocate a group that will serve as a "koala ark" for mainland populations.

The disease-free status of Kangaroo Island's koalas is thanks to the animals being geographically isolated from their mainland counterparts for generations. However, this same isolation has resulted in a lack of genetic diversity, leading to a disease called oxalate nephrosis, which causes kidney collapse, to become widespread among the population.

As an intervention, Daniels and the Koala Life team are planning to breed the chlamydia-free Kangaroo Island koalas with a group of more genetically diverse males from the neighboring state of Victoria to hopefully create a generation of "super koalas."

"We will wind up with koalas that not only are free of infectious disease but are also free of oxalate nephrosis...in which case, you've got the healthiest, most robust, most resilient koalas you can possibly have," Daniels said.

Across mainland Australia, koala populations are coming under increasing pressure, not only from disease and natural disaster but human interference through road and housing developments in the highly-territorial animals' habitat range.

In Australia's most populous state of New South Wales, some experts predict wild koalas will go extinct by 2050 unless more is done to protect the iconic mammal.

Although there are minor differences between Australia's two varieties -- the Northern and Southern koala -- Daniels believes "there's absolutely no reason" why disease-free southern koalas from South Australia could not be re-introduced further north.

"They would do very well there. Even though there's a size difference between the Northerns and the Southerns, there's very little genetic difference," he said.

The relocation and resettlement of Kangaroo Island's koalas was "effectively a military operation" with army personnel assisting park staff with the koalas' round-the-clock feeding and medical-check routine. 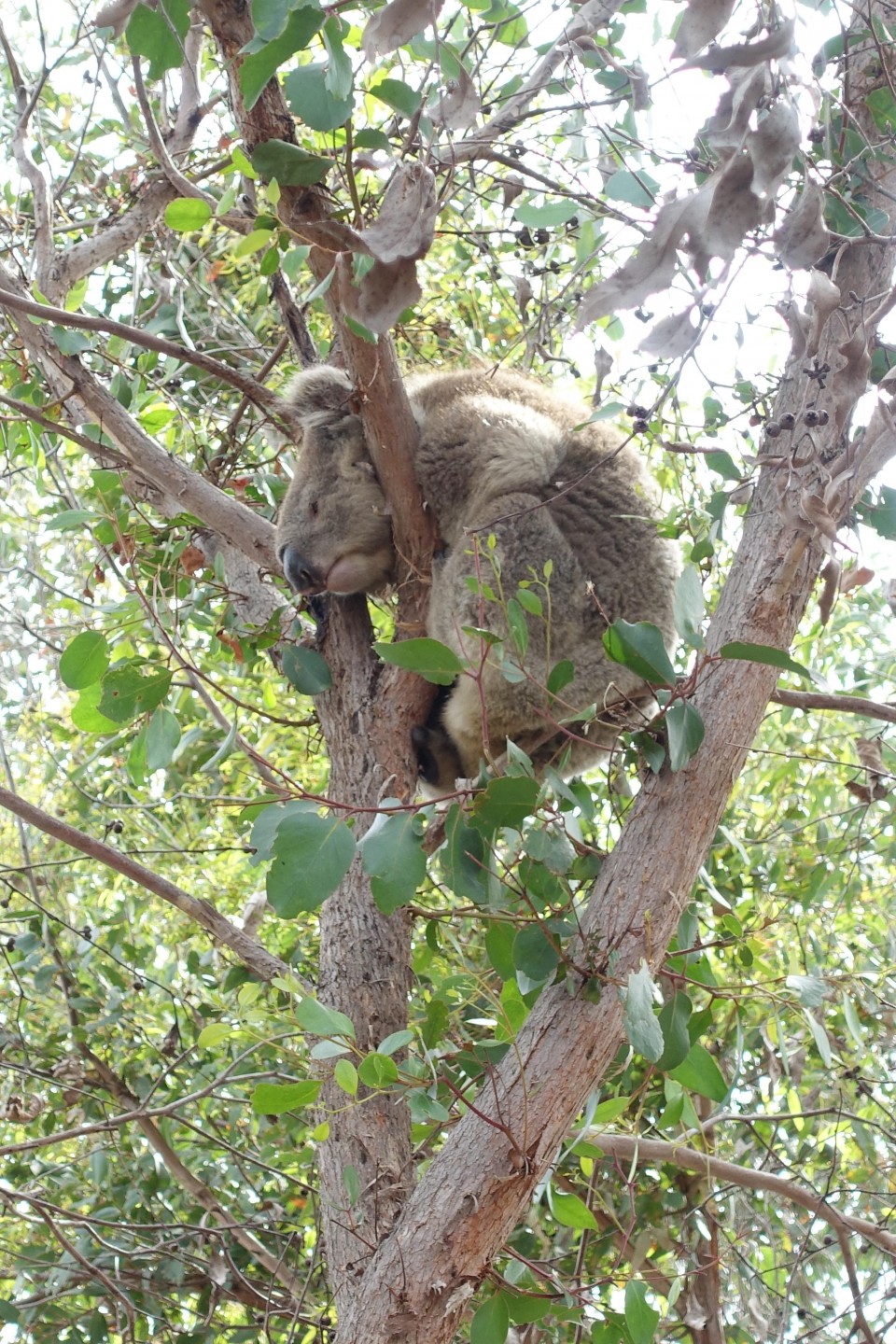 In addition to monitoring any injuries obtained in the fires, handlers had to help the animals adjust to a new diet of different varieties of eucalyptus leaves.

"Really, only the army could have done it, because by doing it the same way every time the koalas very quickly got used to it," he said, explaining that "stress kills koalas" so by establishing a routine early, the relocation was a success.

Although five koalas died during the relocation, two others were subsequently found to be carrying tiny, jelly-bean-sized joeys in their pouches.

"It's kind of poignant when you think about (the fact that) the fires were raging all around these mothers, and they're giving birth at the same time in these trees," Daniels said, describing watching the survival of the two joeys, Breezy and Phoenix, as an "incredible thrill."

Back on Kangaroo Island, Geddes, the wildlife sanctuary founder, has also seen his remaining koalas bounce back from the fires with at least five joeys spotted in recent months.

"They're all miracles of nature as far as I'm concerned," Geddes said.

"They say this was a one-in-200-year fire. And so, remembering that everything -- all the plants and animals in Australia -- have evolved with regular bushfire, we're now seeing this one-in-200-year recovery."