The source told Kyodo News that Iran proposed "new, constructive" ideas at the meeting in Frankfurt in the hope of urgently salvaging the nuclear deal before the "small window of opportunity" closes. 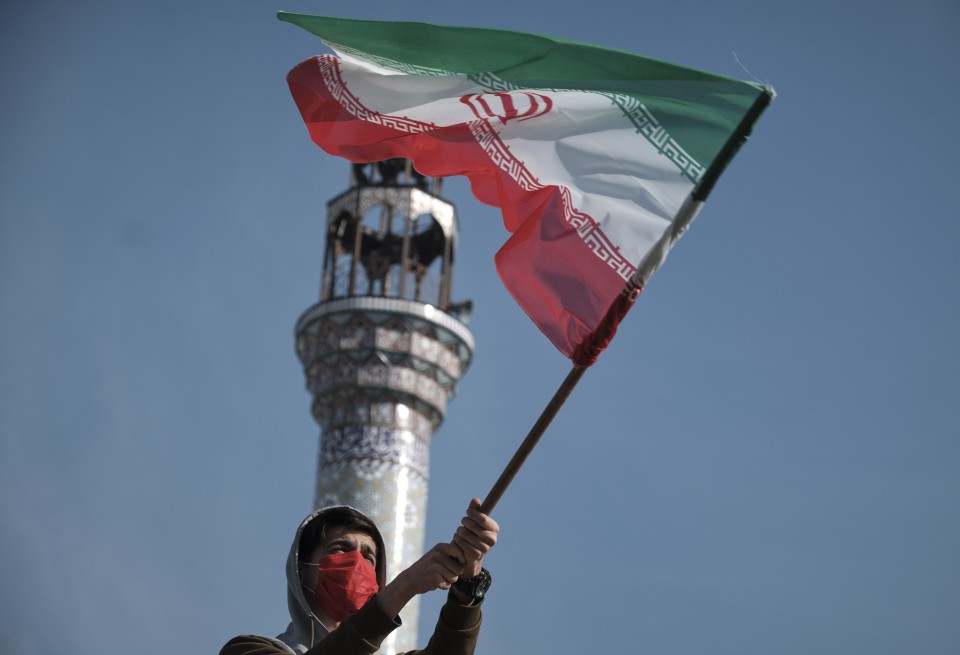 A man wearing a face mask waves an Iranian flag during a rally in Tehran on Feb. 10, 2021. (NurPhoto/Getty/Kyodo)

Besides Iran, the meeting involved Germany, Britain and France, also known as the E3.

A separate meeting was held on Tuesday in Moscow among Iran, Russia and China to coordinate political views.

"Diplomacy is moving and there might be new horizons to reduce the gap between Iran and the U.S.," the source said.

The meetings come ahead of Friday's virtual meeting of the Joint Commission of the Joint Comprehensive Plan of Action, known commonly as the Iran nuclear deal, at which the JCPOA signatories are expected to discuss ideas emerging from the Frankfurt meeting.

Under the deal originally struck with six major powers -- Britain, China, France, Germany, Russia and the United States -- Iran agreed to curb its nuclear activities in exchange for the lifting of sanctions.

But U.S. President Joe Biden's predecessor Donald Trump criticized the deal as flawed and pulled the United States out of it in May 2018. Iran has countered the U.S. move by increasing its nuclear activities, such as uranium enrichment, beyond the limits set in the deal.

The Biden administration has said that, in order to move forward, Iran first needs to comply with its obligations under the JCPOA.

U.S. ready for talks with Iran amid stalemate on nuclear deal