Japan's coronavirus inoculation campaign has been progressing slowly, with over 99 percent of the population yet to receive a shot about two months after its start, trailing many developed nations.

Japan, which currently completely depends on imports for its coronavirus vaccine supply, began inoculating about 36 million seniors aged 65 or older on Monday after beginning its campaign with health care workers on Feb. 17. The elderly account for around 29 percent of Japan's population. 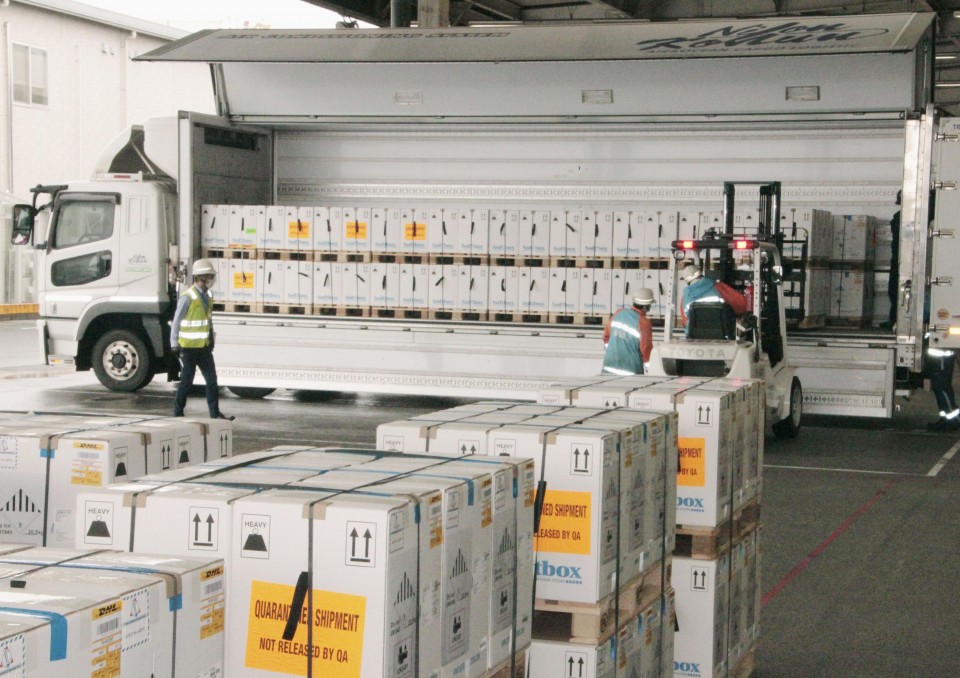 Cargo containing Pfizer Inc.'s COVID-19 vaccine is loaded onto a truck at Narita airport near Tokyo on April 5, 2021, after its arrival from Belgium via an All Nippon Airways plane. (Kyodo) ==Kyodo

Out of Japan's 4.8 million healthcare workers, about 1.1 million -- equivalent to about 0.87 percent of the population -- had received at least one dose as of Friday, according to the Health, Labor and Welfare Ministry.

Some advanced nations are way ahead of Japan in terms of COVID-19 vaccinations, according to data gathered by researchers at the University of Oxford.

Our World in Data, produced by a research team based at the university, showed that over 61 percent of the population in Israel had received at least one vaccine dose as of last Thursday, while the rate stood at 47 percent in Britain, around 34 percent in the United States, and around 15 percent in Germany.

Several factors are believed to be behind the slow rollout in Japan. Japanese authorities only gave their first approval to a COVID-19 vaccine -- the one developed by U.S. pharmaceutical giant Pfizer Inc. and its German partner BioNTech SE -- about two months after Europe and the United States did so.

Another reason is that Japan currently relies exclusively on the European Union for shipments of the Pfizer shot, and approval is needed for each shipment under the region's new export controls.

Domestic drugmakers have been slow to develop their own vaccines. Anges Inc., Daiichi Sankyo Co., Shionogi & Co. and KM Biologics Co. have begun clinical trials but all still have some way to go before going to market.

Meanwhile, Takeda Pharmaceutical Co. has an agreement to manufacture Novavax Inc.'s coronavirus vaccine in Japan and started its clinical trial in the country in February.

Public concern over potential side effects from coronavirus vaccines remains relatively high in Japan, and the government implements strict requirements for vaccines, including mandatory additional clinical trials on its own population.

But the dependence on overseas supply has fanned worries of leaving Japan vulnerable to future pandemics.

"Establishing the ability to domestically develop and produce vaccines is a crucial issue from a crisis management standpoint," Prime Minister Yoshihide Suga said in a parliamentary session Monday.

Some health experts have tried to add a positive twist to Japan trailing behind other countries, saying it would allow Tokyo to assess the situation regarding side effects overseas.

Others, though, warn that the fact that Japan has seen significantly fewer infections and COVID-19 deaths than in many European countries and the United States may have led to a lack of urgency over vaccines -- one that may see it lose out in the international competition to secure supply.

Taro Kono, the minister in charge of vaccination efforts, has said the government is poised to distribute a total of 100 million doses, enough to fully vaccinate 50 million people, by late June.

The Pfizer vaccine, the only vaccine approved in Japan so far, is a double-dose vaccine with people set to take their second shot usually three weeks after the first shot.

Britain's AstraZeneca Plc filed for approval of its COVID-19 vaccine in February, followed by U.S. biotechnology company Moderna Inc. in March. Suga has pledged to secure enough COVID-19 vaccines for Japan's population of 126 million within the first half of 2021.

In the meantime, municipalities have voiced their concerns over a series of schedule changes for the vaccination program by the central government.