The United Kingdom made a formal request Monday to join the Trans-Pacific Partnership free trade pact, the first accession application by a member outside the 11 participating Pacific countries.

International Trade Secretary Liz Truss said in a videoconference with her Japanese and New Zealand counterparts, "I want Britain's accession to the CPTPP to help build back better the global trading system." 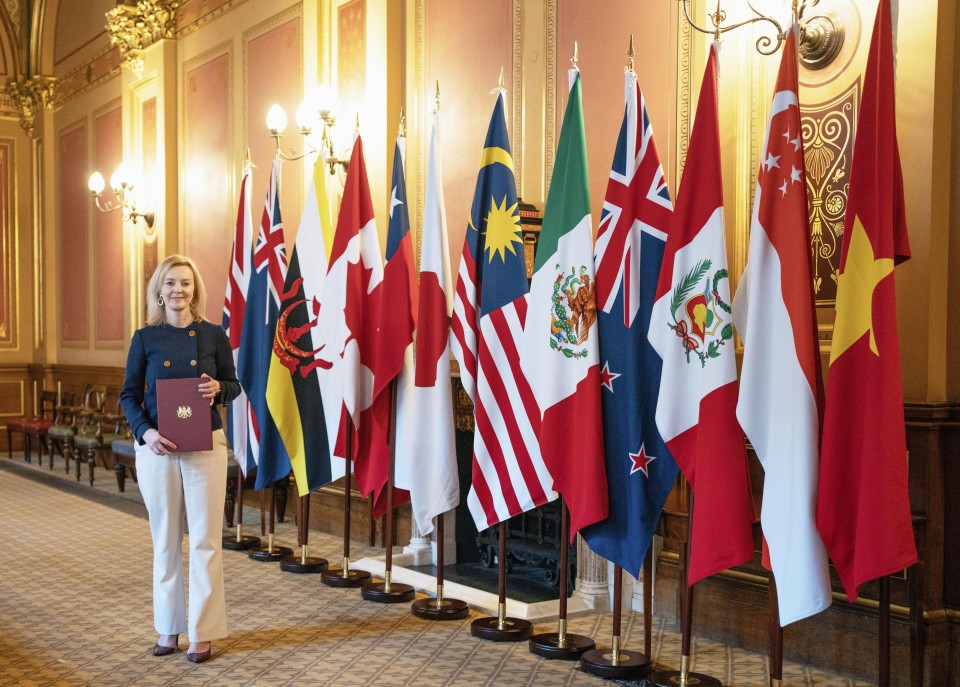 Truss was referring to the pact's formal name -- the Comprehensive and Progressive Agreement for Trans-Pacific Partnership.

Japan and other TPP members have welcomed the new development, seeing it as an impetus to expanding free trade based on high-standard investment and trade rules. The United Kingdom is expected to enter talks with TPP members in the spring.

"As we seek to recover from the devastating impact of the COVID-19 it's all the more important for like-minded allies to work together to make the case for free trade and put it into action," Truss told Yasutoshi Nishimura, Japan's minister in charge of TPP negotiations, and New Zealand Trade Minister Damien O'Connor.

"I hope that Britain acceding will encourage others who share our views and outlook to consider joining this important group," she said.

Nishimura said Japan "will lead the discussion towards the evolution and the expansion of the CPTPP."

Japan assumes the presidency of the TPP's decision-making body this year, while New Zealand is responsible for receiving accession requests as the depositary for the trade pact.

Once the decision-making body approves the start of the process for London's entry, a working-level group will be set up to proceed with accession talks.

Thailand to apply to join trans-Pacific FTA this month: official

In the negotiations, the United Kingdom will need to show that it can comply with TPP rules, while entering tariff negotiations on a bilateral basis with the 11 members.

Its accession will ultimately need to be approved by consensus at the decision-making body.

Japan is hoping for the return of the United States to the trade accord, which was initially promoted by former U.S. President Barack Obama to balance China's growing influence in the Asia-Pacific region.

Obama's successor Donald Trump pulled the country out soon after taking office in 2017 under his "America First" mantra.

Washington's return to the pact is unlikely anytime soon, however, as President Joe Biden, who succeeded Trump, has signaled his administration would first focus on the domestic economy and the novel coronavirus response.

But China's desire is unlikely to be satisfied easily due to the TPP's high-standard free trade rules, such as a ban on preferential treatment for state-owned enterprises and stronger intellectual property rights protection, Japanese officials said.

Besides China, South Korea, Taiwan and Thailand have also expressed interest in joining the TPP.