International Trade Secretary Liz Truss will speak with her counterparts from Japan and New Zealand on Monday morning, the department said, with formal talks expected to begin this spring.

Britain would become the first new country to join the TPP since its formation in 2018, as well as the first non-Pacific nation. The regional agreement groups Australia, Brunei, Canada, Chile, Japan, Malaysia, Mexico, New Zealand, Peru, Singapore and Vietnam.

In a statement, British Prime Minister Boris Johnson said applying to join the TPP showed "ambition to do business on the best terms with our friends and partners all over the world," adding that Britain wanted to be "an enthusiastic champion of global free trade."

The announcement comes one year after Britain's departure from the European Union, which enabled the government to form independent free trade agreements with other nations outside the bloc.

Britain and Japan concluded a bilateral free trade pact in October 2020 after five months of talks. The treaty entered into force on Jan. 1 this year. 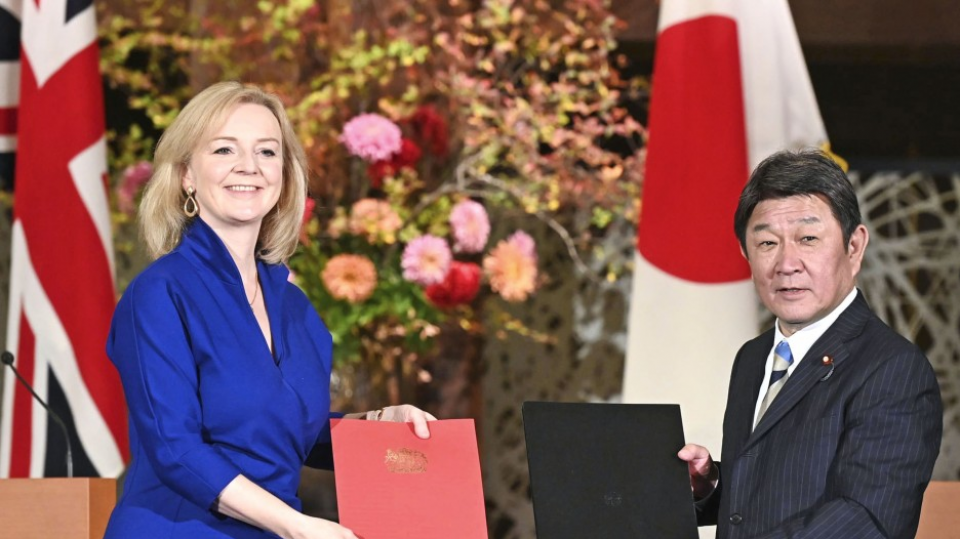 Japan's minister in charge of TPP negotiations, Yasutoshi Nishimura, expressed hope on Twitter that Britain will "demonstrate its strong determination to fully comply with high-standard obligations" of the free trade pact.

"I believe that the U.K.'s accession request will have a great potential to expand the high-standard rules beyond the Asia-Pacific," he tweeted.

China, South Korea, Taiwan and Thailand have also expressed interest in joining the TPP, formally known as the Comprehensive and Progressive Agreement for Trans-Pacific Partnership which covers about 13 percent of the world's gross domestic product.

The United States participated in negotiations and was one of the 12 original signatories to the deal until former President Donald Trump withdrew the nation in 2017 before the agreement was ratified.