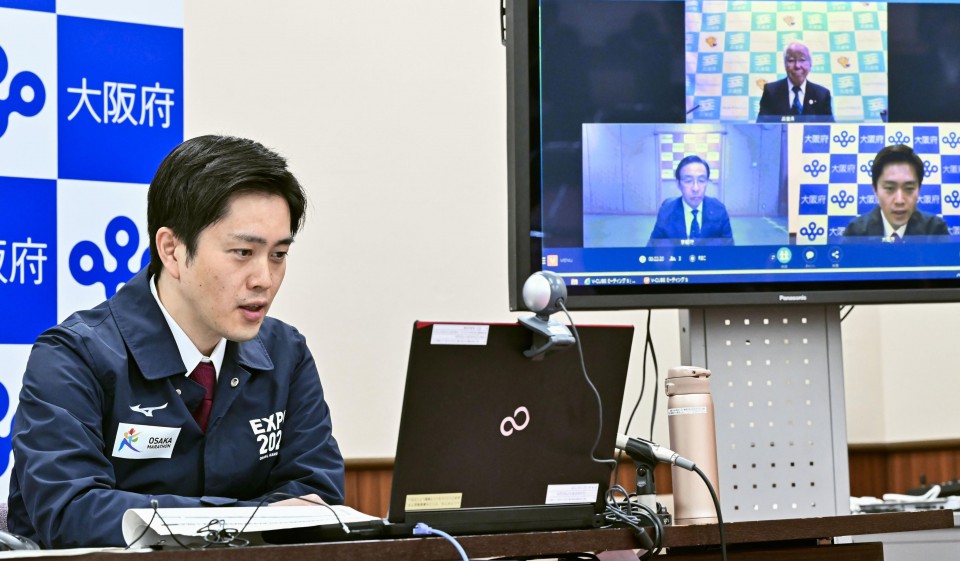 Osaka Gov. Hirofumi Yoshimura speaks with the governors of Kyoto and Hyogo online in Osaka on Jan. 9, 2021.(Kyodo)

The governors of Osaka, Kyoto and Hyogo asked the central government Saturday to include their western Japan prefectures in the state of emergency that took effect a day earlier for the Tokyo region over the resurging coronavirus.

The three governors met online with Yasutoshi Nishimura, minister in charge of the government's response to the pandemic, a day after their prefectures all reported record numbers of infection.

While stating that the three prefectures "are in an extremely serious situation where an emergency declaration is being considered," Nishimura said he would make a decision after "careful assessment" of the situation and state of the medical system.

The resurgence of the virus has been increasing the strain on the country's medical system. Nationwide, the daily tally topped 7,000 for the third day in a row, after hitting a fresh high of around 7,900 on Friday.

Nishimura also asked the governors to implement stronger measures on par with those taken in the Tokyo metropolitan area, citing shorter operating hours for eateries, more telework, refraining from nonessential outings and stricter conditions in place for holding events.

"My understanding that we are in a situation where a state of emergency should be declared has not changed," said Osaka Gov. Hirofumi Yoshimura, adding that he will put in place the same measures as the Tokyo metropolitan area from next Thursday to Feb. 7.

On Saturday, Hyogo again reported a daily record of 324, while Osaka logged 647, its second largest so far, and Kyoto 126.

Japan's cumulative total of deaths also surpassed 4,000, reaching the milestone just half a month after the figure topped 3,000 on Dec. 22, underscoring the rapid pace in the death toll in line with the surge in infections.

Tourist sites and entertainment districts in Tokyo and its three neighboring prefectures of Chiba, Kanagawa and Saitama were largely deserted on Saturday as they entered their first weekend under a one-month state of emergency.

The capital on Saturday reported an additional 2,268 coronavirus cases, topping the 2,000 mark for the third straight day. It logged a record 2,447 infections on Thursday and 2,392 cases on Friday.

The governors of numerous other prefectures, including Aichi and Gifu prefectures in central Japan as well as Tochigi, north of Tokyo, are also considering making similar requests, their officials have said.

But some local governments have already declared their own state of emergency, with Miyazaki Gov. Shunji Kono saying, "We don't have time to wait for the central government, so I put the brakes on (the virus' spread)."

Mie Gov. Eikei Suzuki has indicated his intention to also independently declare a state of emergency for his prefecture should Aichi and Gifu be included in the central government's declaration.

Also Saturday, the National Governors' Association finalized draft proposals on measures against the pandemic, asking the central government to swiftly expand the state of emergency if necessary to cover areas where infections are spreading rapidly.

The governors' body also called for urgent revision of a special measures law on pandemics to include penal provisions in order to make requests for business closures and shorter opening hours at bars and restaurants more effective.

By declaring a state of emergency, the central government enables local authorities to urge people to stay at home as much as possible and call on eateries to close earlier.