Osaka and two other western Japan prefectures decided Friday to jointly request the central government to expand the state of emergency to their areas as coronavirus infections continue to rise.

Kyoto and Hyogo prefectures will join Osaka in making the official request to Yasutoshi Nishimura, minister in charge of the government's response to the novel coronavirus, during an online meeting on Saturday afternoon, according to Osaka prefectural government sources. 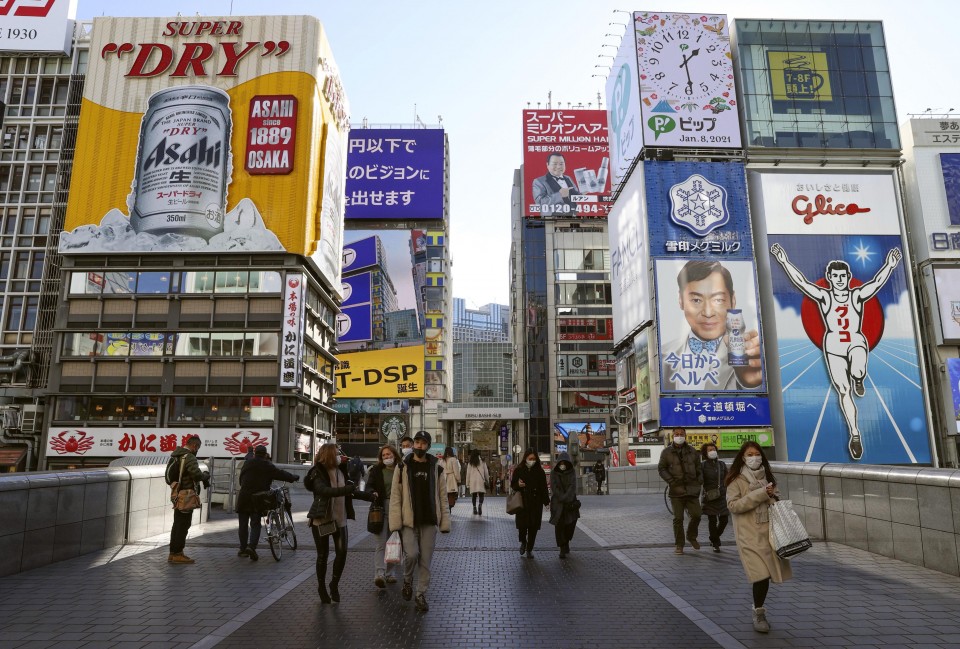 People wearing masks walk in Osaka, western Japan, on Jan. 8, 2021, amid the coronavirus pandemic. Osaka, Kyoto and Hyogo prefectures decided the same day to jointly request the central government to expand the state of emergency to them. (Kyodo) ==Kyodo

"If we don't ask (the central government) to raise measures against infection a notch, the medical system will collapse," Osaka Gov. Hirofumi Yoshimura said. The prefecture confirmed 654 new infections, an all-time high for the third day in a row.

Nishimura said the three prefectures, which all reported record infections on Friday, are in an "unpredictable situation," and that he will work closely with them to decide on a response.

Tokyo and its three neighboring prefectures of Chiba, Kanagawa and Saitama were put under a one-month state of emergency from Friday amid record numbers of cases.

The capital reported 2,392 additional cases, the second-highest total after 2,447 were recorded on Thursday.

A total of 17 prefectures reported record new infections on Friday, bringing the nationwide daily increase to around 7,900, a fresh high for the fourth consecutive day. The daily death toll also hit a record of 78.

With other major cities also seeing a worrying upward trend, there have been growing calls from health experts and regional authorities to expand the area under the emergency to beyond Tokyo and the three prefectures.

Aichi Gov. Hideaki Omura said at a press conference Friday that he will consider asking the central government to add his prefecture, which has also been seeing record numbers of infections, to the list. 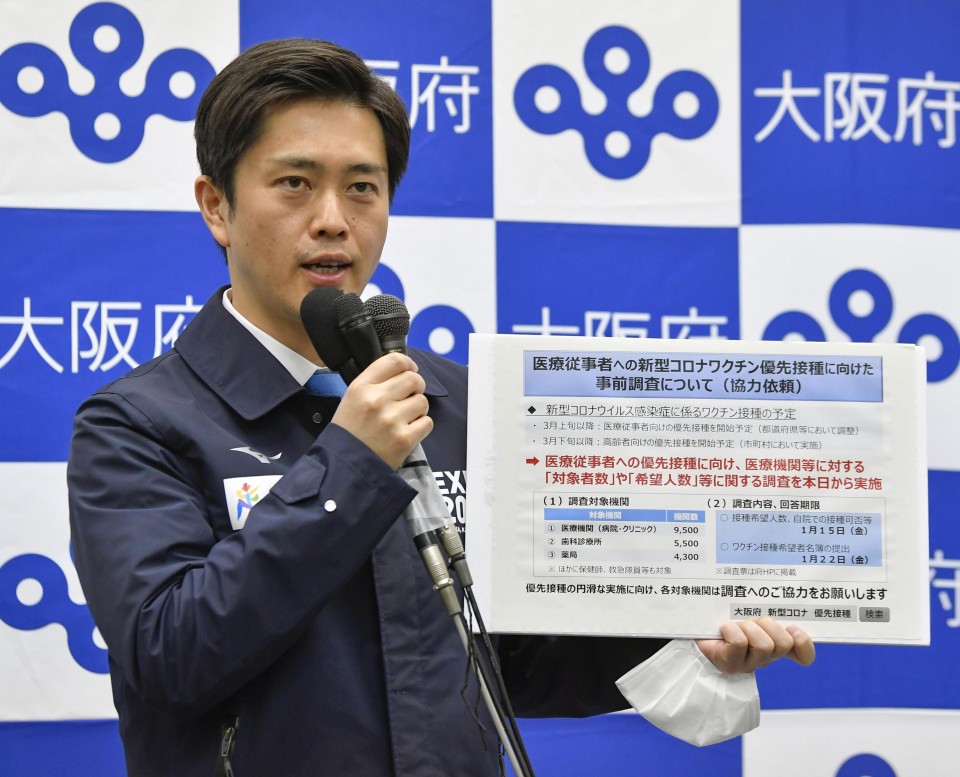 Osaka Gov. Hirofumi Yoshimura speaks to reporters in Osaka after attending a meeting on measures against the novel coronavirus on Jan. 8, 2021. Osaka, Kyoto and Hyogo prefectures decided the same day to jointly request the central government to expand the state of emergency to them amid the continued rise in coronavirus infections. (Kyodo) ==Kyodo

At an online meeting with the heads of major Japanese business organizations, Nishimura requested that they push their members to promote teleworking to help the Tokyo area achieve a 70 percent reduction in commuters.

Nishimura said the number of infections in recent weeks is on a "whole different level" compared with the previous state of emergency last spring.

"Unless we restrain the flow of people eating and drinking (together), we will not be able to contain infections," he told the three major business lobbies -- the Japan Business Federation, the Japan Chamber of Commerce and Industry, and the Japan Association of Corporate Executives.

The meeting was held a day after Prime Minister Yoshihide Suga declared the latest emergency, enabling local authorities to urge people to stay at home as much as possible and restaurants to close earlier.

Alarmed by the increasing strain on the medical system, the governors of Tokyo, Chiba, Kanagawa, and Saitama prefectures, accounting for about half of the nationwide tally, asked the central government earlier this month to consider declaring a state of emergency. 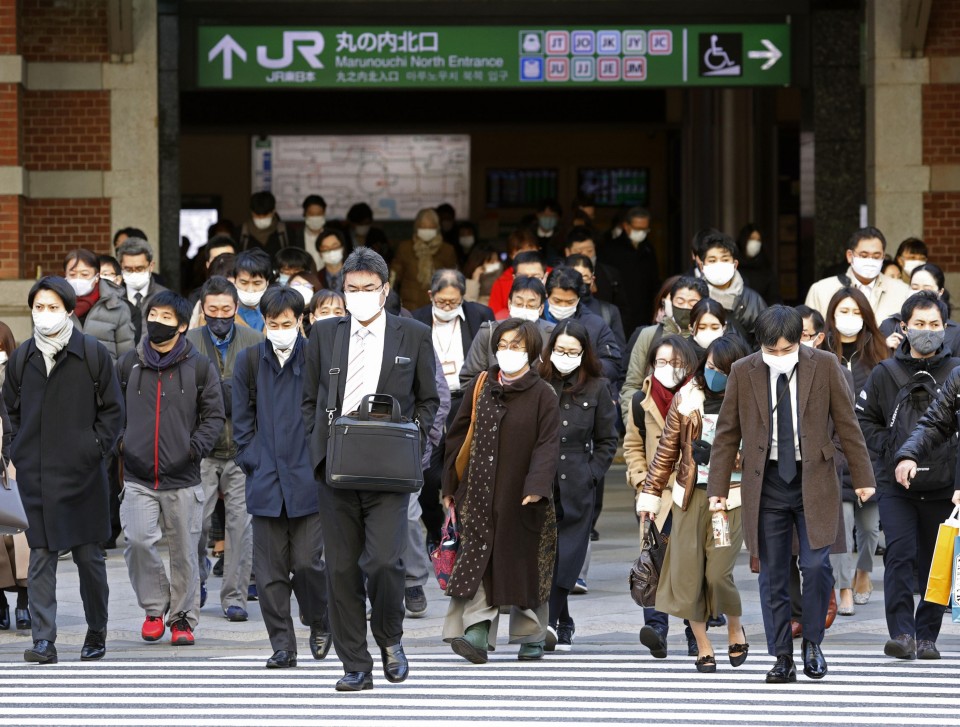 People wearing face masks walk near JR Tokyo Station in the Japanese capital on Jan. 8, 2021. Japanese Prime Minister Yoshihide Suga declared a state of emergency in the Tokyo metropolitan area the previous day due to a recent surge in coronavirus infections. (Kyodo) ==Kyodo

Suga, when he met the press Friday morning, again called for people to cooperate in stemming the resurgence of infections and said, "I'd like to overcome the difficult situation by any means."

When asked whether he would include Aichi and Osaka prefectures under the declaration, Suga said, "We will assess the situation and deal with it in close cooperation with the regions."

Tokyo Gov. Yuriko Koike was concerned after she was told by officials that rush-hour trains in the capital were still crowded.

"I'd like people to thoroughly implement measures, such as cutting commuter traffic by 70 percent and doing telework immediately," she told reporters.

"The most important thing is to stop the flow of people. I want people to forgo New Year gatherings and parties this year," she said.

At Tokyo Station, Wakako Ikegami, 37, who lives in Kawasaki, Kanagawa Prefecture, said she felt her train had fewer commuters but was nevertheless skeptical that cases could be quickly curbed.

"When the previous state of emergency was declared, it took time for the number of infections to decline. I wonder if we'll see any impact in one month," she added.

Among major steps authorized to be taken by Tokyo and neighboring prefectures are asking restaurants, bars and karaoke venues to close by 8 p.m. and requesting establishments to cease serving alcohol at 7 p.m. through Feb. 7.

While paying up to 60,000 yen ($580) per day should such establishments comply with the request, the government has warned it will publically disclose the names of businesses that do not cooperate. 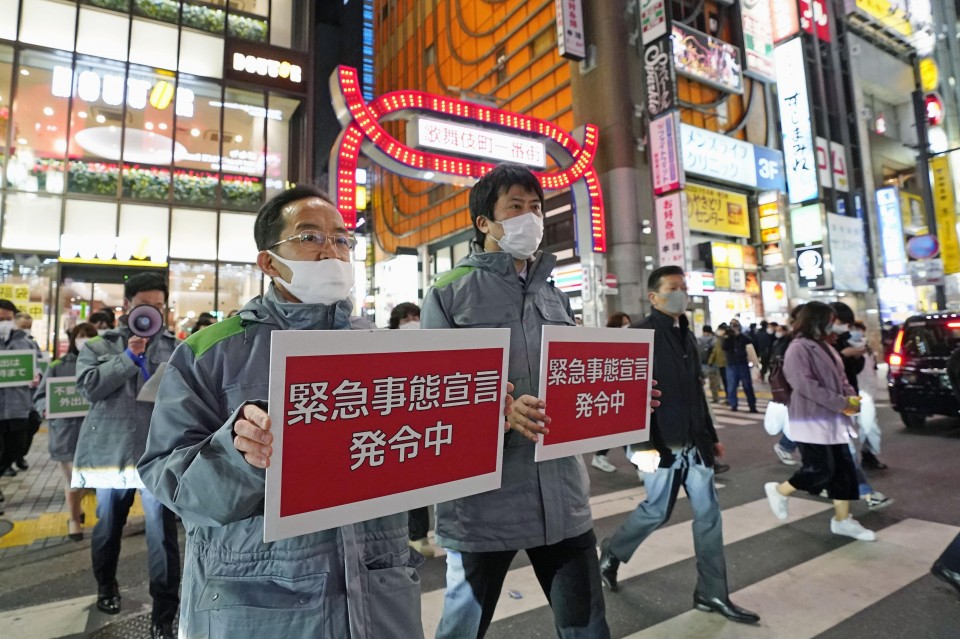