A Tokyo-based group has turned to a food familiar to every Japanese person -- the "omusubi" rice ball -- as a vehicle to promote international exchanges in the lead up to the Tokyo Olympics and Paralympics this summer.

The group, "Eat, and Energize the East," launched a project in 2019 to create opportunities for residents of Japanese municipalities registered as "host towns" for the Tokyo Games to interact with overseas visitors by making and eating omusubi together. 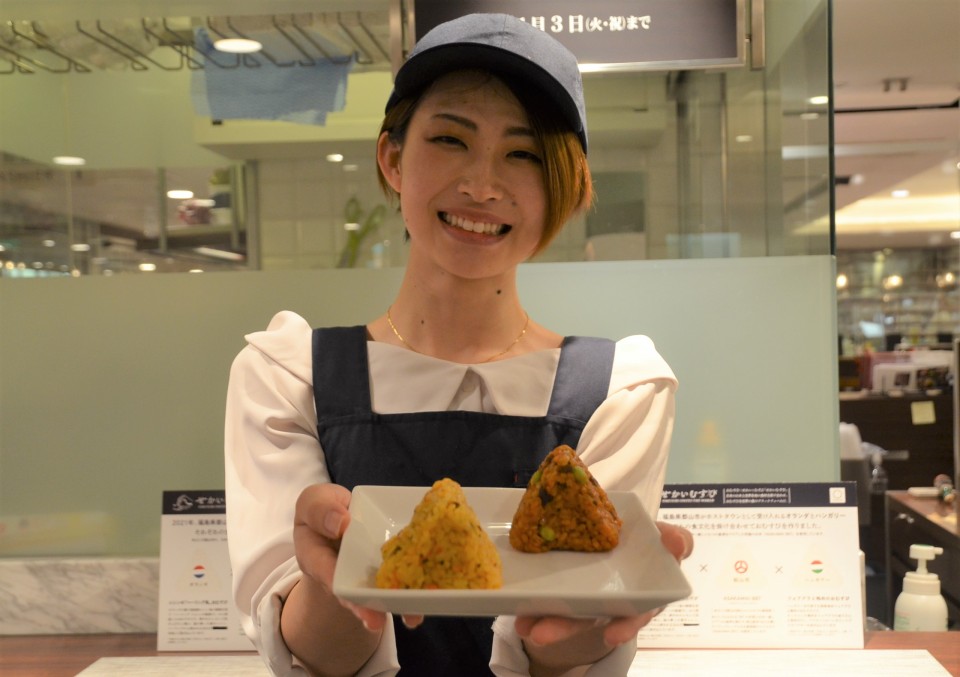 Photo taken on Nov. 2, 2020, shows two omusubi rice balls that were sold by group "Eat, and Energize the East" at a department store in Tokyo. (Kyodo)

In the project called "Omusubi Unites the World," participants combine rice produced locally with fillings inspired by popular dishes and food from the country it is hosting to enhance mutual understanding and promote omusubi and rice grown in Japan.

"We took (the Olympics) as a good opportunity to export Japanese food cultures overseas. Omusubi has infinite possibilities," said Daiju Takahashi, the chief administrator of the group, which has been supporting the food industry in northeastern Japan hard-hit in the wake of the earthquake, tsunami and nuclear disaster of March 2011.

The snack is more widely known as "onigiri" in Japan and around the world, but the group prefers to use the word "musubi" that represents the concept of connectedness.

Sometimes wrapped in dried seaweed, the food consists of rice pressed into a triangular or spherical shape. The traditional food, often eaten with the hands as a light, on-the-go meal, contains fillings such as salmon, "umeboshi" salted plums or "mentaiko" seasoned cod roe.

It can be a healthy alternative to fast food like hamburgers, Takahashi said, adding that everybody around the world can make original omusubi of their own by using a filling of their choice. 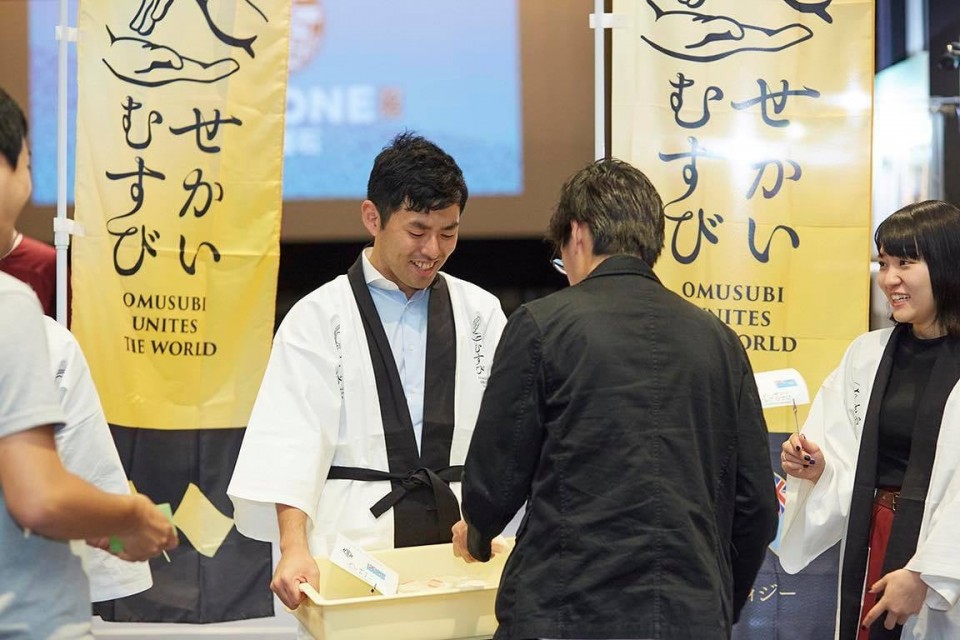 The group considered the Tokyo Games, which were initially scheduled for the summer of 2020, a perfect opportunity to share omusubi with the world given that municipalities across the country were trying to offer residents a chance to interact with overseas athletes and visitors.

In 2015, the Japanese government started soliciting municipalities for its host town initiative, encouraging them to welcome overseas athletes to train and spend time with locals. More than 500 municipalities across Japan registered to host athletes from some 180 countries and regions.

"Many host towns were wondering what to do in terms of cultural exchange. We wanted to offer them something fun," Takahashi said.

The group was founded in 2011, just months after the triple disaster that struck northeastern Japan. Members have held numerous projects to support farmers and other food suppliers in the area and promote Japanese food cultures.

During the 2019 Rugby World Cup hosted by Japan, the group organized its first major event in Kamaishi, Iwate Prefecture, which was scheduled to hold two group phase matches during the tournament. 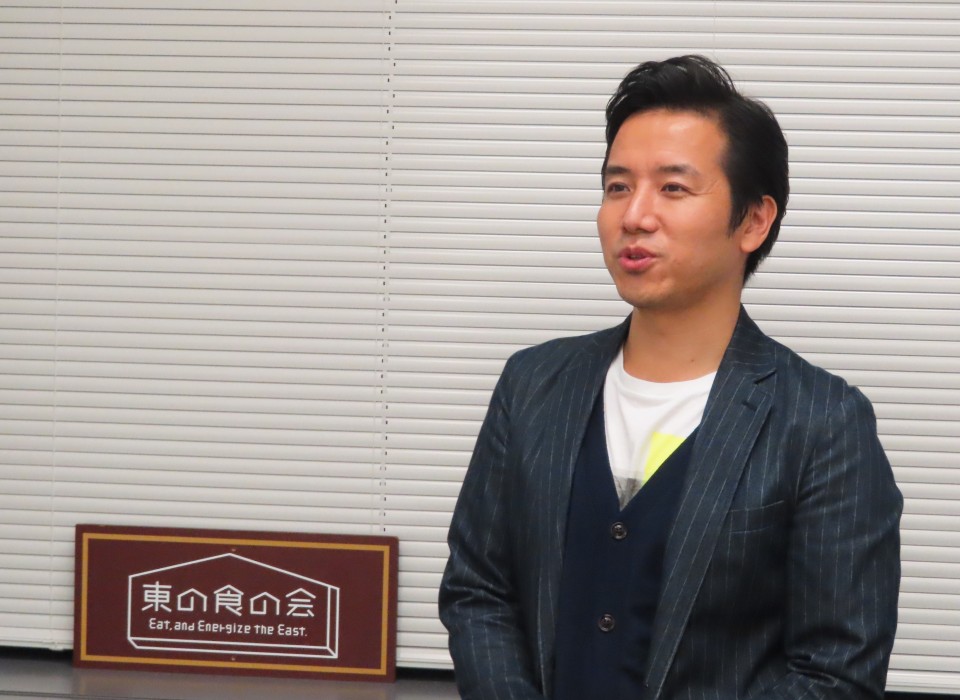 Daiju Takahashi, the chief administrator of the group, "Eat, and Energize the East," speaks in an interview in Tokyo on Nov. 2, 2020. (Kyodo)

High school students from the prefecture made omusubi with students from Australia, the country that will be the city's guest for the Tokyo Games. The omusubi they made together had Australian beef and local seafood.

Also, at a fan zone in the city, where rugby lovers were able to watch matches live on big screens while drinking and eating, the group distributed four types of omusubi representing each team that was to play in the northeastern Japan city, which was devastated by the 2011 earthquake and tsunami.

The omusubi representing Canada had a unique combination of Kamaishi scallops and Canadian maple syrup and herring roe, while the Uruguay omusubi featured the country's famed caviar.

The recipes were created by a chef from a French restaurant in Tokyo, among others.

Mitsuhito Hayashi, a resident who handed out the omusubi, said the project allowed many locals to learn about other countries through food.

"It is difficult to get to know about a country by reading explanations on a pamphlet. But if you learn what they eat, it is possible to feel closer," Hayashi, 30, said. "I was happy to see how locals were excited to learn about different cultures."

"We also tried to explain what omusubi is to fans from overseas. We told them that Japanese people eat omusubi more often than sushi," he said.

While the group was looking to ride the momentum provided by the Olympics, the one-year postponement due to the novel coronavirus pandemic has proved a hurdle.

The global health crisis has also made it difficult for events like this to be held, and especially ones that will see many people coming together to make and eat rice balls with their hands.

However, there should be something that can be done as an alternative even during the pandemic, Takahashi said, as the group looks for ideas that might allow it to move forward despite the difficult situation.

The group opened a popup shop at a department store in Tokyo for about two weeks between late October and early November, selling two types of omusubi, inspired by dishes from the Netherlands and Hungary, to several hundred people.

"I came to visit after finding out about this store on Twitter. I couldn't imagine what they taste like, but they tasted great. It's also fun to try different food from other countries through omusubi," said Ayano Sasaki, a customer who tried the omusubi.

Takahashi said the group is looking at different options with the Tokyo Games approaching, including creating recipes beforehand and holding events online to prevent the risk of infections.

"There should be events that promote cultural exchange even if they may be held remotely (during the Olympics)," he said.

"The coronavirus pandemic has caused a divide and has canceled many plans for cultural exchange," he said. "So we want to do something without the risk of infections."