Festivals allow people to escape their everyday lives and experience the color and cultures of the world without having to travel. In 2020, however, such opportunities were limited by the coronavirus pandemic.

One festival that felt the brunt of the pandemic was the Asakusa Samba Carnival, a late-summer Tokyo highlight that sees high-tempo Brazilian rhythms filling the streets of Asakusa, one of the most popular tourist spots in the capital. 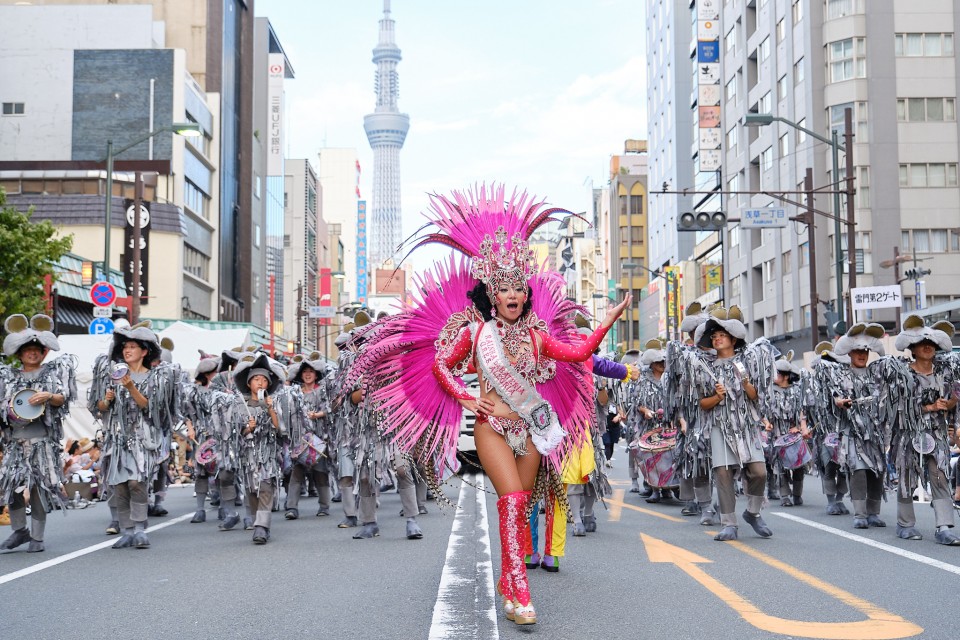 The top dancer of a samba team named G.R.E.S. Alegria leads its percussion band at the Asakusa Samba Carnival in Tokyo on Aug. 31, 2019. (Photo courtesy of G.R.E.S. Alegria)(Kyodo)

Organizers said in December they are postponing the event until the pandemic has passed, announcing the decision while there was still more than half a year before the event was to be held in September.

The annual samba parade, which usually takes place in late August and attracts half a million spectators to the area northeast of central Tokyo, was to be held in September 2020 after the Olympics and Paralympics that were scheduled in July and August, respectively.

But after the postponement of the Tokyo Games to 2021 was announced in March due to the spread of the coronavirus, the Asakusa carnival organizers in April decided to postpone their own event until September of that year.

However, amid the record infections in many parts of the country since November, the carnival organizing committee said on Dec. 1 they will postpone the 39th carnival "until when the infection ceases to spread and enables the event to be held safely, in peace and in a fun way," on its website.

Nobuyuki Suwa, chairman of the organizing committee, told Kyodo News the organization and samba teams held discussions and eventually reached the tough conclusion to postpone the event until sometime in future.

As background to the decision, Suwa explained the carnival, co-hosted by the Taito Ward government, the local community and sponsor Asahi Breweries Ltd., must comply with the ward's guidelines on infection prevention.

According to the guidelines, events in the ward can be held if precautionary measures such as hand sanitizing are implemented. Personal details of attendees must also be recorded for contact tracing if someone is found to be infected with the virus.

Given the nature of the event, it is impossible to implement the guidelines, Suwa said.

"The event draws 500,000 spectators who come to Asakusa by subways, buses or on foot. It is not possible to set up gates at every corner of the area to test spectators for infections," said Suwa.

While the decision to postpone seems to have come very early, the committee needs more than half a year to prepare the huge event that features 4,000 performers, he said.

The decision to postpone was generally agreed by the major participating samba teams, though some university groups voiced disappointment that it will be the second time they have missed out, according to Toshiaki Ishikawa, a representative of an association of major samba teams performing in Asakusa.

Ishikawa said it was correct to make a quick decision to postpone as participating groups usually spend the entire year preparing their carnival performance, selecting a theme and designing their dazzling feather and sequin festooned costumes and floats. 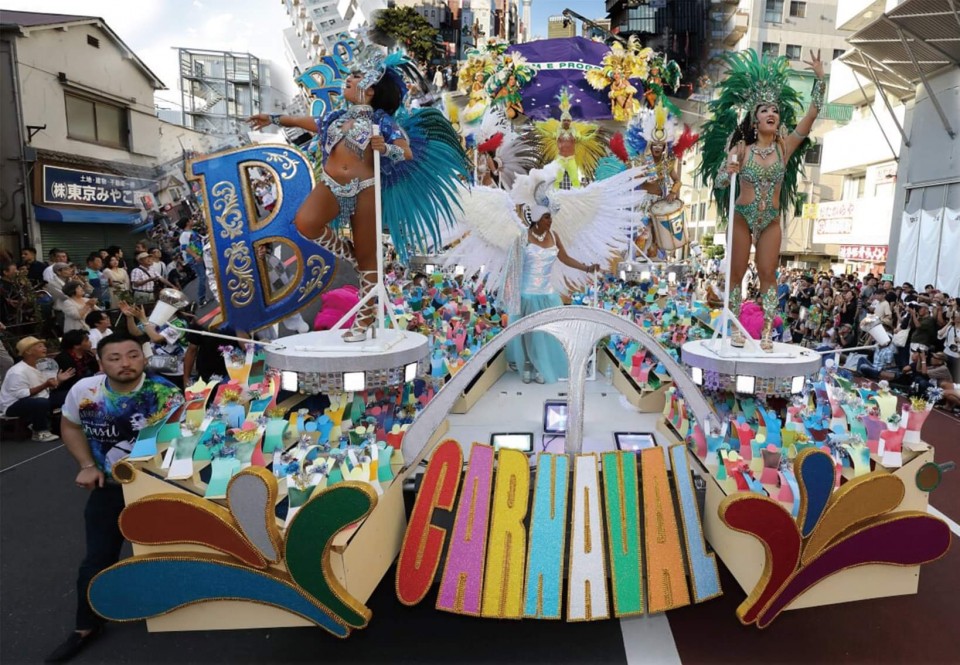 Ishikawa, who is also a carnival director of a Saitama-based samba team named G.R.E.S. Alegria, added the pandemic has hindered team members from dancing in groups and practicing their instruments, making it difficult to maintain the high standard of performance for which the festival is known.

"Around 40 members usually gather in a public hall to practice and some 150 members do so right before the Asakusa carnival. We cannot hold such practice due to restrictions caused by the infection," he said.

"The attraction of the carnival is its busy parade. They also sing a theme song of the team's parade of the year while performing," he said. "These elements of the carnival make it difficult to create a socially distanced carnival."

The practice and preparation time is especially important to the samba teams, Ishikawa said, because the carnival is also a competition.

While it is not widely known, the Asakusa Samba Carnival adopted its competitive style from its first year in 1981. In 2019, 16 teams competed in two leagues, dancing and playing music for prestige and awards.

The Asakusa event is held in the same spirit as Rio de Janeiro's world-famous Carnival. Held to revitalize the Asakusa district and the wider Taito Ward over the past 40 years, some local volunteers even visited Brazil's second-most populous city before holding the first Asakusa carnival to understand the real thing and bring its spirit home, according to Suwa.

Today, the event has grown to be the largest Brazilian carnival in the Northern Hemisphere and has gained such a reputation that several Brazilian dancers and musicians have taken part to spread their knowledge, techniques and culture to their Japanese brethren.

Stores in Asakusa, which have financially supported the carnival, are facing great adversity due to the pandemic. Local shops and restaurants this year on average saw sales halved due to the lack of tourists from abroad, posing another hurdle to holding the carnival. 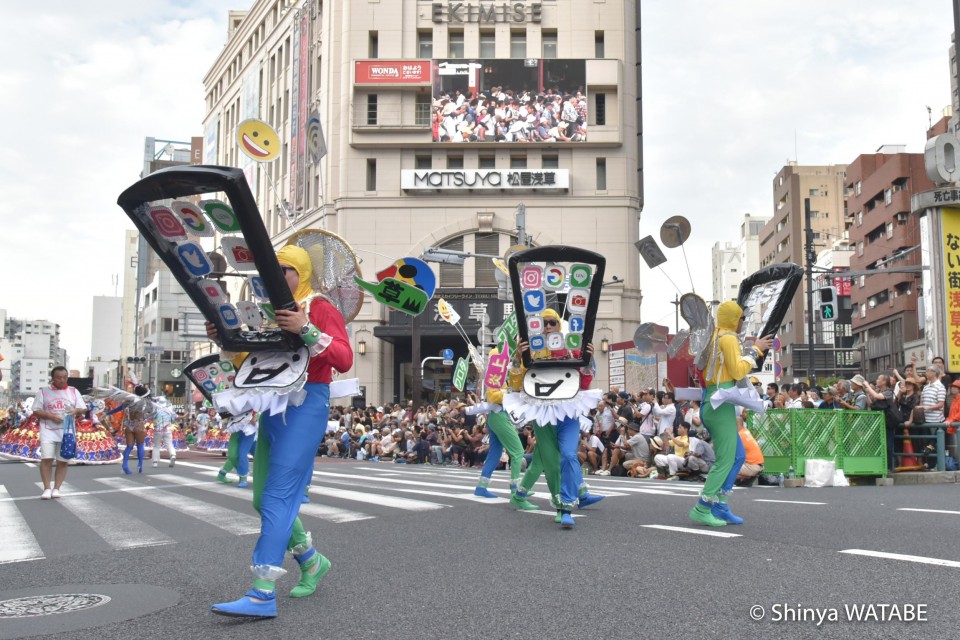 "Tourists from neighboring prefectures are returning to Asakusa but they tend not to buy souvenirs, in contrast to domestic visitors from further away and overseas. So sales declined and it's a huge blow," said Suwa, who also chairs the association of stores on Hanakawado Street in Asakusa and serves as secretary general of the retailers' joint association in the district.

The general decline led to decreased tax revenues for Taito Ward, making the subsidy it provides to the carnival a heavier burden, he added.

Although Tokyo still has an uncertain path out of the pandemic and local businesses continue to struggle, Suwa is eager to restart the carnival when the situation normalizes.

"The carnival is the event with the longest history in Asakusa" except the Sanja Matsuri festival and shrine ritual held every May, said Suwa, who has been organizing the carnival for more than 10 years.

Also a main dancer, Ishikawa expressed enthusiasm for the carnival's return, saying people have told him they miss hearing the passionate Brazilian music and explosive percussion that bring life to the streets.

"We are determined to create the best carnival that makes the two-year wait worth it for spectators. We are enduring the pandemic with our eye on the next event and preparing for it by practicing online," he said.