Japan's ruling party agreed Thursday to scrap a plan to make it a criminal offense for COVID-19 patients to refuse hospitalization, ceding to opposition criticism that the punishment was too harsh.

The introduction of a prison sentence of up to one year had been part of Prime Minister Yoshihide Suga's efforts to bolster the government's ability to fight a recent surge in infections. 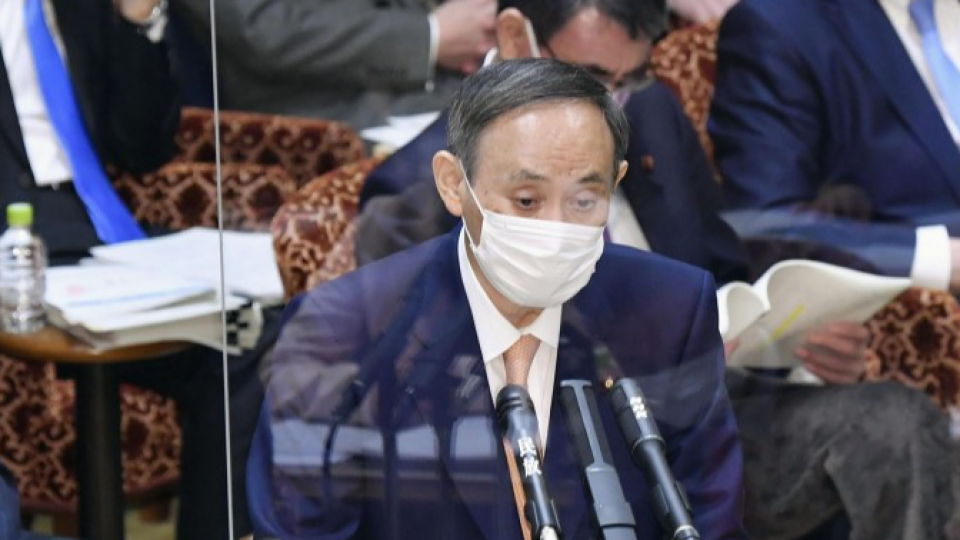 Japanese Prime Minister Yoshihide Suga (R) speaks at a House of Councillors budget committee session in Tokyo on Jan. 28, 2021, with a transparent acrylic screen set in front of him to prevent coronavirus infection. (Kyodo) ==Kyodo

The ruling Liberal Democratic Party and the main opposition Constitutional Democratic Party of Japan did, however, agree on fines to penalize uncooperative COVID-19 patients as well as restaurants and bars that refuse to comply with orders for shorter operating hours, albeit lower penalties than the government had sought.

Parliament is set to begin deliberations on the necessary revisions to the infectious diseases law and the coronavirus special measures law Friday and enact them next Wednesday.

Suga said the government would respect the changes, adding that even the pared down penalties would help improve the effectiveness of its pandemic response.

"We will do everything we can to stem the spread of the coronavirus," he told reporters.

The government had sought to introduce a prison sentence of up to one year or a maximum fine of 1 million yen ($9,500) for people who refuse to be hospitalized after testing positive for the coronavirus, and a fine of up to 500,000 yen for those who do not cooperate with epidemiological surveys by health authorities.

The LDP and CDPJ decided to reduce the fines to a maximum of 500,000 yen for COVID-19 patients resisting hospitalization and 300,000 yen for those who fail to participate in epidemiological surveys.

Hiroshi Moriyama, Diet affairs chief of the LDP, admitted there had been disagreement even within the ruling party over whether the proposed criminal punishments were appropriate.

"We decided to withdraw (the plan) after asking for a judgment by the prime minister," Moriyama told reporters following a meeting with Jun Azumi, his CDPJ counterpart.

CDPJ chief Yukio Edano welcomed the decision. "We took a big step forward," he said at a meeting of the opposition party.

Amid a recent resurgence of coronavirus infections in Japan, Suga declared a second state of emergency covering Tokyo and three adjacent prefectures on Jan. 7 and expanded it to seven other prefectures less than a week later.

Public support for the prime minister has dwindled amid criticism that his insistence on keeping the economy going led to a delayed pandemic response.

While a third wave of infections appears to have passed its peak, nationwide deaths attributed to the coronavirus hit a single-day record of 113 on Thursday and hospitals continue to be overwhelmed with serious COVID-19 cases.

Tokyo logged 1,064 new infections the same day, bringing the cumulative total in the capital to 97,571.

Under the state of emergency, the government has urged people to stay at home as much as possible and asked bars and restaurants to cut opening hours. Firms are being encouraged to adopt remote working, while attendance at large events is being capped.

But there is currently no penalty for refusing to comply with the requests and some eateries, already hit hard by the pandemic, have ignored them to avoid losing more customers.

Suga has set Feb. 7 as the end date of the state of emergency, but government and ruling party sources say it will likely be pushed back, with one option being an extension to the end of February.