Prime Minister Yoshihide Suga on Wednesday declared a state of emergency in seven additional prefectures, including Osaka and Aichi, expanding the measure as Japan's cumulative total of coronavirus cases topped 300,000 amid a recent spike in infections.

Including the Tokyo metropolitan area, which came under a state of emergency last week, a total of 11 prefectures covering more than half of the country's population and around 60 percent of its economy will remain under the measure through Feb. 7. 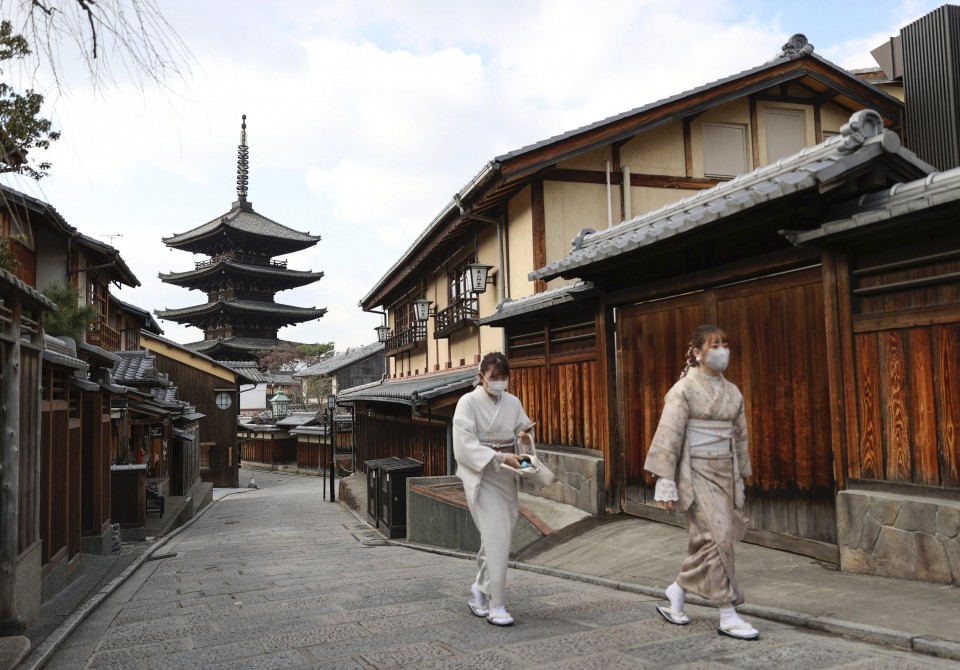 Fewer people than in a normal year walk in Kyoto, western Japan, on Jan. 13, 2021, amid the coronavirus pandemic. Prime Minister Yoshihide Suga is set to declare a state of emergency in seven additional prefectures, including Kyoto, later in the day, amid a resurgence of virus infections across the country. (Kyodo) ==Kyodo

People are being asked to stay home and restaurants to close by 8 p.m., while firms are encouraged to have employees work from home or stagger their shifts.

Suga called the move necessary to prevent outbreaks in urban areas from spreading to other parts of the country and asked for the public's cooperation.

"We will take every measure to protect people's lives and livelihoods," he said at a press conference.

The five other prefectures to be covered by the state of emergency are Tochigi to the north of Tokyo, Gifu in central Japan, Hyogo and Kyoto in the west, and Fukuoka to the southwest.

While the country has seen a rapid increase in the number of infections since the cumulative total surpassed 200,000 in late December, Yasutoshi Nishimura, minister in charge of Japan's coronavirus response, expressed reluctance to expand the emergency nationwide.

"We have to carefully think whether we should subject areas to it that have kept the number of infections low," he said at a House of Representatives committee meeting.

Health minister Norihisa Tamura told an expert panel meeting that Japan continues to be in a "very serious situation" in terms of infections and urged the public to avoid risky behavior, including dining in large groups.

Suga said Japan will take additional measures at the border to prevent imported infections, with the entry of all nonresident foreign nationals to be suspended while the state of emergency is in place. 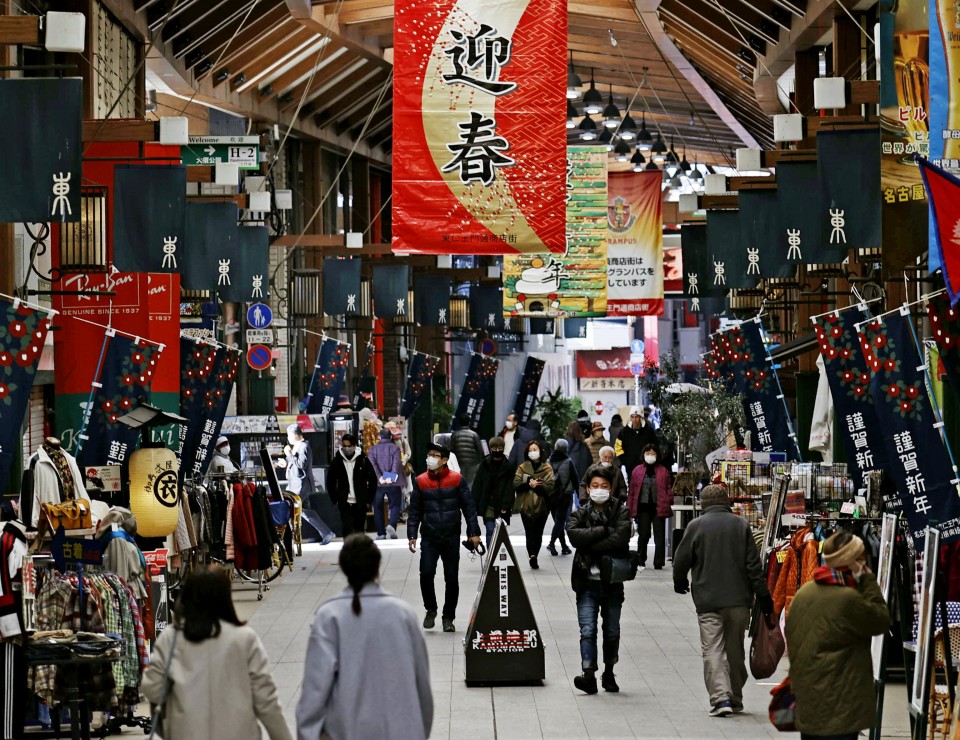 People wearing face masks walk in Nagoya, central Japan, on Jan. 13, 2021, amid the coronavirus pandemic. Prime Minister Yoshihide Suga is set to declare a state of emergency in seven additional prefectures, including Aichi, later in the day, amid a resurgence of virus infections across the country. (Kyodo) ==Kyodo

Unlike hard lockdowns some other countries have imposed, residents of the areas under the state of emergency are only asked to refrain from nonessential outings, and there is no punishment for those who fail to comply.

Schools will remain open, and university entrance exams set to begin later this week will go ahead.

Just days earlier, Suga said the situation in Osaka and Aichi, both of which have seen a sharp rise in infections this month, did not warrant a state of emergency.

But the prime minister faced mounting criticism that the government was falling behind the curve in dealing with the surge, which experts warned had put the health care system on the brink of collapse.

On Wednesday, opposition lawmakers bashed the expansion of the state of emergency as coming too late, with Yukio Edano, leader of the Constitutional Democratic Party of Japan, saying Suga only acted after being urged by governors.

"This amounts to the government abandoning its responsibilities," Edano told reporters.

A Kyodo News survey conducted over the weekend showed the approval rate for Suga's Cabinet at 41.3 percent, down 9 percentage points from December, with more than two-thirds of respondents dissatisfied with the government's pandemic response.

Osaka, which appeared to be containing the spread of the virus at the end of 2020, reported more than 3,800 new cases in the week through Monday. Kyoto and Hyogo prefectures have also reported record-high daily figures.

The occupancy rate of hospital beds for severe cases in Osaka has been hovering around 70 percent since December, with the prefecture logging a record 171 such patients earlier this month.

Aichi had 49 serious cases with overall COVID-19 hospitalizations at a record 696 as of Monday.

Osaka, Kyoto and Hyogo prefectures requested Saturday to be included in the state of emergency while Tochigi, Gifu and Aichi prefectures did so Tuesday. Fukuoka has not made such a request.

Nishimura told a lower house committee the government's decision to declare a state of emergency is not based solely on requests from governors but on whether enough hospital beds are available for COVID-19 patients.

The declaration gives local authorities legal grounds to urge people to stay home as much as possible and place restrictions on the use of facilities. It also gives them the right to "name and shame" eateries that do not comply with calls to shorten operating hours.

A state of emergency was previously declared in Tokyo, Chiba, Saitama, Kanagawa, Osaka, Hyogo and Fukuoka prefectures in early April during Japan's first wave of infections and was expanded nationwide later that month.

It was lifted in steps in May as the increase in coronavirus infections slowed.