People in Japan expressed anxiety Thursday about how their lives and businesses will be impacted by the imposition of another state of emergency in Tokyo and neighboring areas following record numbers of coronavirus cases. 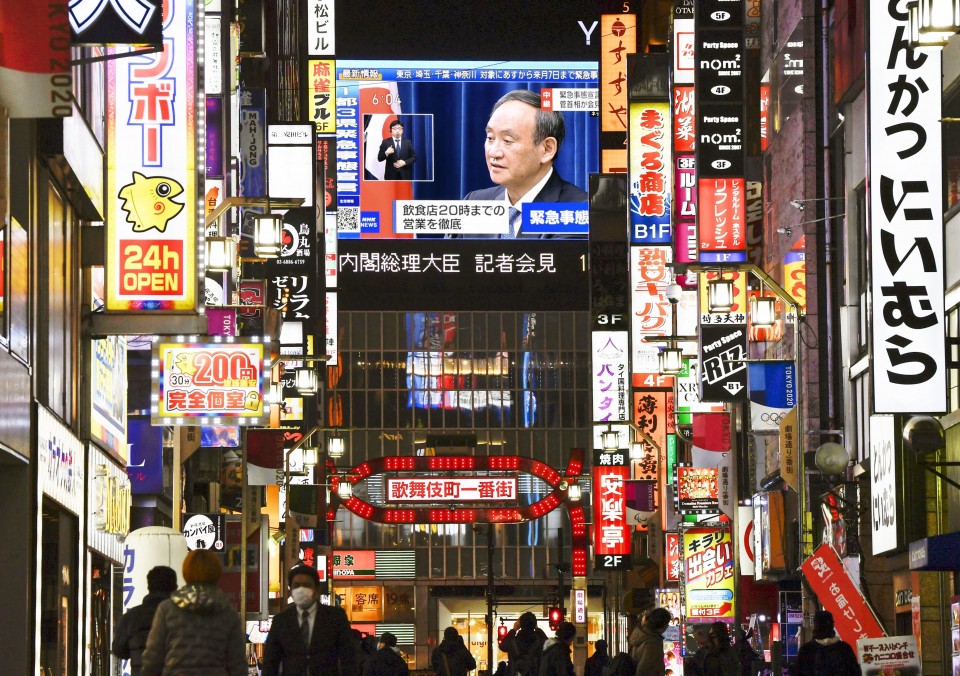 A large screen in Tokyo's Shinjuku area shows Japanese Prime Minister Yoshihide Suga speaking at a press conference on Jan. 7, 2021, to declare a state of emergency in Tokyo and adjacent Kanagawa, Chiba and Saitama prefectures to fight a recent surge in coronavirus infections. (Kyodo) ==Kyodo

Prime Minister Yoshihide Suga's declaration of a monthlong state of emergency to Feb. 7 was met with skepticism and criticism, with some residents questioning whether it would have an immediate effect in curbing infections.

"We have started to understand what kind of disease (COVID-19) is, so I feel like we are not facing the same sense of urgency that we had in spring last year," Kunio Iyonaga, a 48-year-old commuter from Yokohama said at Tokyo's busy JR Shimbashi Station.

The emergency declaration came as the number of daily coronavirus cases in Tokyo hit yet another all-time high of 2,447, up more than 800 from the previous record set Wednesday, raising concern about the strain on the medical system.

A 38-year-old mother in the city of Saitama, who saw her 8-year-old son off to elementary school on Thursday morning, said, "I wonder if this will be enough. I want (the government) to impose stricter measures to fix the current situation."

Toshio Nakagawa, president of the Japan Medical Association, welcomed Wednesday the government's plan to declare a state of emergency but said it should look into the possibility of expanding the coverage of the declaration to the whole country.

Some health care workers said the medical system in the Tokyo area, accounting for about half of the country's more than 7,500 cases reported Thursday, is close to breaking point as many of the beds secured for COVID-19 patients are already occupied.

Juntendo University Hospital in Tokyo has prepared 30 beds for such patients, including 10 beds in intensive care units, but 25 were in use as of Wednesday evening.

"If we get emergency patients at night with suspected (COVID-19) symptoms, we need to treat them in our coronavirus ward. The beds will be occupied quickly, which may force us to decline new patients," said Toshio Naito, a professor in charge of coronavirus diagnosis at the university hospital.

"There were more things that (the government) could have done such as issuing a state of emergency earlier," he said.

Elderly people, who face a higher risk of contracting a severe form of the COVID-19 illness, also said the declaration came too late.

"I only go out for shopping within walking distance when I need to," said Chikako Sugano, 69, in Tokyo's Sugamo area, adding it is difficult to understand why Suga's administration let this severe situation occur and did not issue the declaration until now.

Residents in the area subject to the emergency -- Tokyo, Chiba, Kanagawa and Saitama prefectures -- will be asked to stay at home. The government will also call for businesses including restaurants, entertainment facilities and department stores to close earlier. 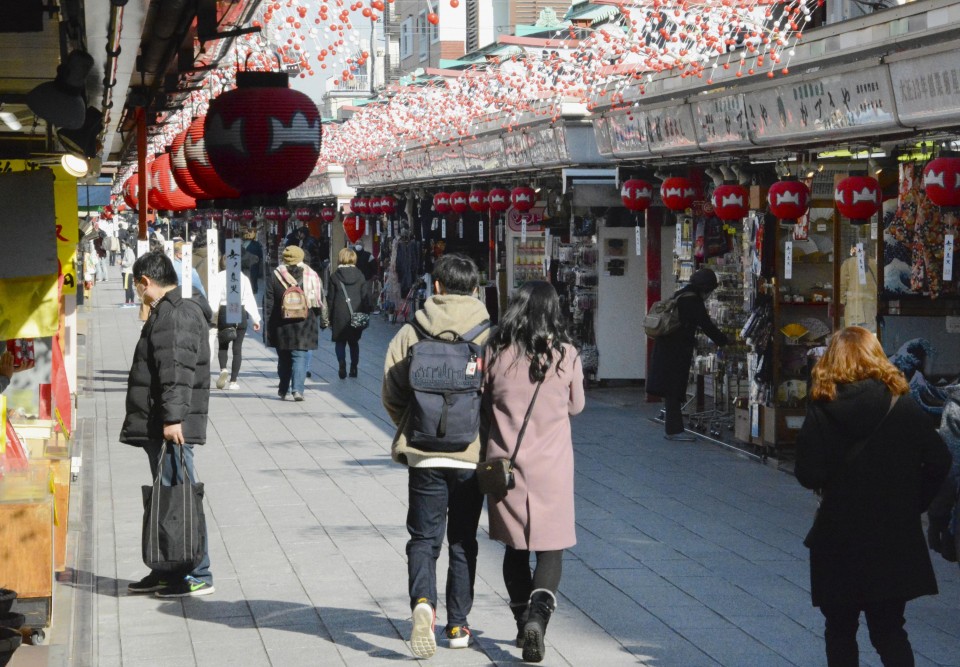 Fewer people than in a normal year walk in Tokyo's Asakusa tourist area on Jan. 7, 2021, amid the coronavirus pandemic. (Kyodo) ==Kyodo

In Asakusa, one of the most popular tourism spots in Tokyo, souvenir store owner Yoko Kikuchi voiced worries over the impact of the restrictions. During the previous state of emergency in spring last year, she said the streets were empty.

"People were outside during the year-end and New Year holidays. I don't think there will be a significant drop (in the number of people) compared to last time," Kikuchi, 76, said.

While her store has had fewer customers from abroad since last year, Kikuchi said she has received support from locals, who purchased goods to give to their relatives. "I want to survive this somehow and see more customers in the springtime," she said.

A 66-year-old selling roasted chestnuts in Yokohama's Chinatown said, "As it has already been difficult, it is hard to accept further restrictions will be implemented."

Kaede Mochizuki, 19, who was visiting Chinatown with a friend, said he has only been to university a few times since last year because of the pandemic.

"It really hurts to think that I won't be able to go to (university) for a long time again," he said.

A Tokyo metropolitan government official said, "We have a sense of crisis. I wonder how effective the declaration will be, but we need to do what we can."