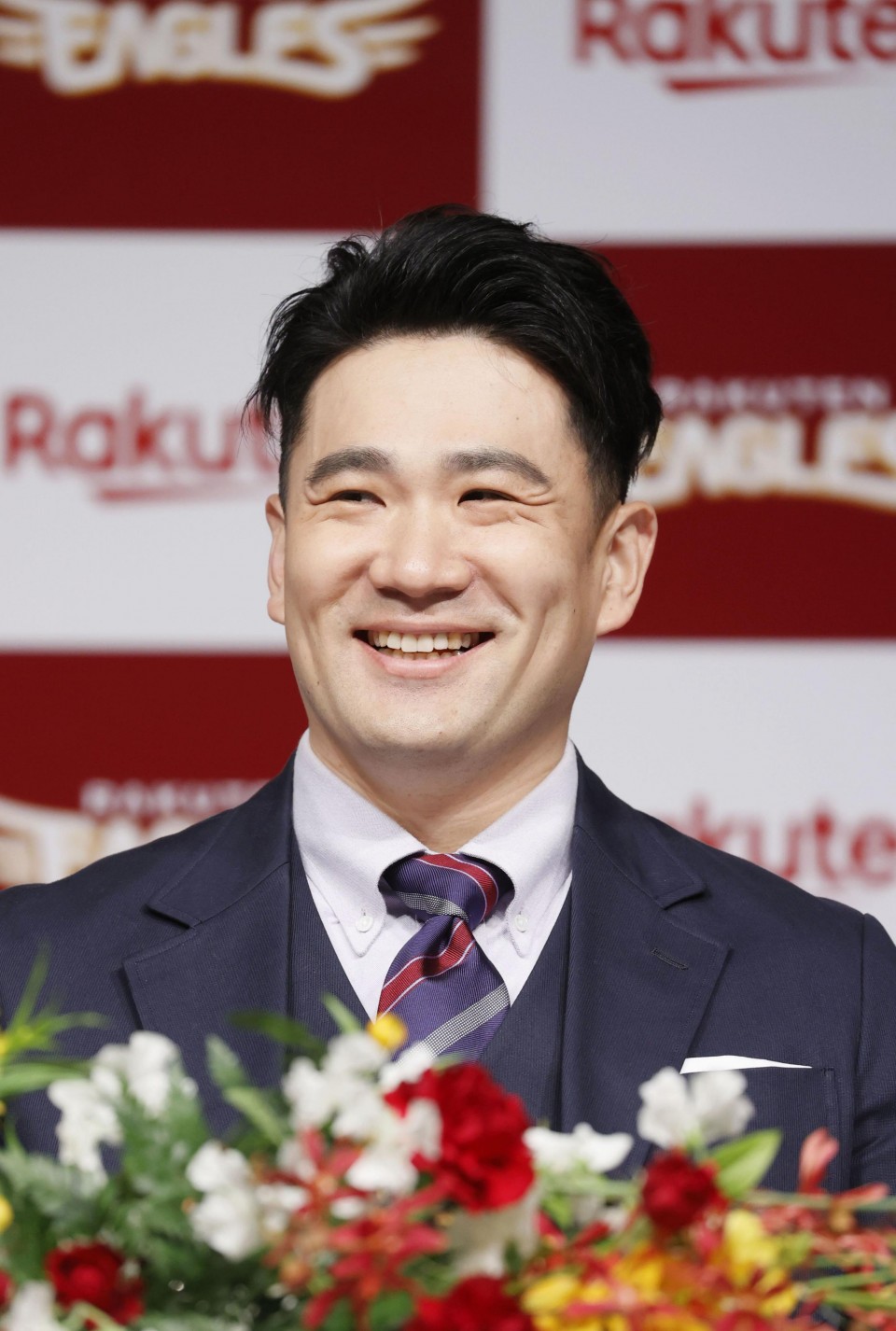 Former New York Yankees pitcher Masahiro Tanaka said Saturday he was motivated to return to Japan in 2021 partly because it is the 10th year since the area surrounding the Rakuten Eagles' Sendai home base was devastated by an earthquake and tsunami.

Tanaka is returning to the Eagles, whom he led to the 2013 Japan Series championship before signing a seven-year contract with the Yankees. Tanaka went 78-46 during his time in New York, and his return to Japan as a free agent was one of the surprises of the major league's offseason.

"This is the 10th year since the disaster, but also the first year I've been a free agent with the ability to play for the team of my choice. For me, that 10 years was an important number, gave this timing special meaning and led me toward this decision," Tanaka said during a press conference at a Tokyo hotel.

"Now that I am close by again, there may be many things I can do, and I want to do my best in whatever way I can. To start with, I want to work hard and make an effort so that people will see me at the ballpark, on the mound, doing well."

The timing of Tanaka's free agency and the one-year postponement of the 2020 Tokyo Olympics due to the coronavirus pandemic opened the door to an unexpected possibility, playing for Japan again in the Olympics.

"I thought they would be in 2020, so I never thought I could play in them. If I'm selected, I want to play," Tanaka said. "I competed at the (2008) Beijing Olympics and that ended in frustrating fashion. Then baseball was dropped from the Olympic program. But it's back now, and I want to win a gold medal."

The 32-year-old right-hander said his first choice had been to re-sign with the Yankees and remain in New York, but early on realized that was not likely to happen.

"I played over there for seven years, was told how highly I was valued, and received really good offers," Tanaka said. "But for me there was also this chance, to play for the Eagles again, to pitch once more in front of my fellow Japanese. In the end, no offer in the States surpassed that."

He revealed that for seven years, he had kept the idea of returning to Japan at some point in his heart, but disliked talking about it for fear people would get the wrong idea.

"I had this thought I might return and play for the Eagles again and not just at the end of my career, but when the time was right," he said, while admitting he does not know what comes next.

"I feel I have unfinished business in America, and I haven't given up on that, so they agreed on terms that would keep those options open. Without throwing away those goals, I really want to win a Japan championship here. But there are no guarantees in this world, so my first goal is to give it all I have for this season."

Asked about whether he desired to win any individual titles this season, Tanaka said the only title he was obsessed with was being No. 1 in Japan with the Eagles for the first time in eight years.

"Honestly trying to surpass that impressive 2013 season that remains stopped in time for everyone is a worthy quest, so I want to contribute to as many wins as I can to that pursuit," he said. 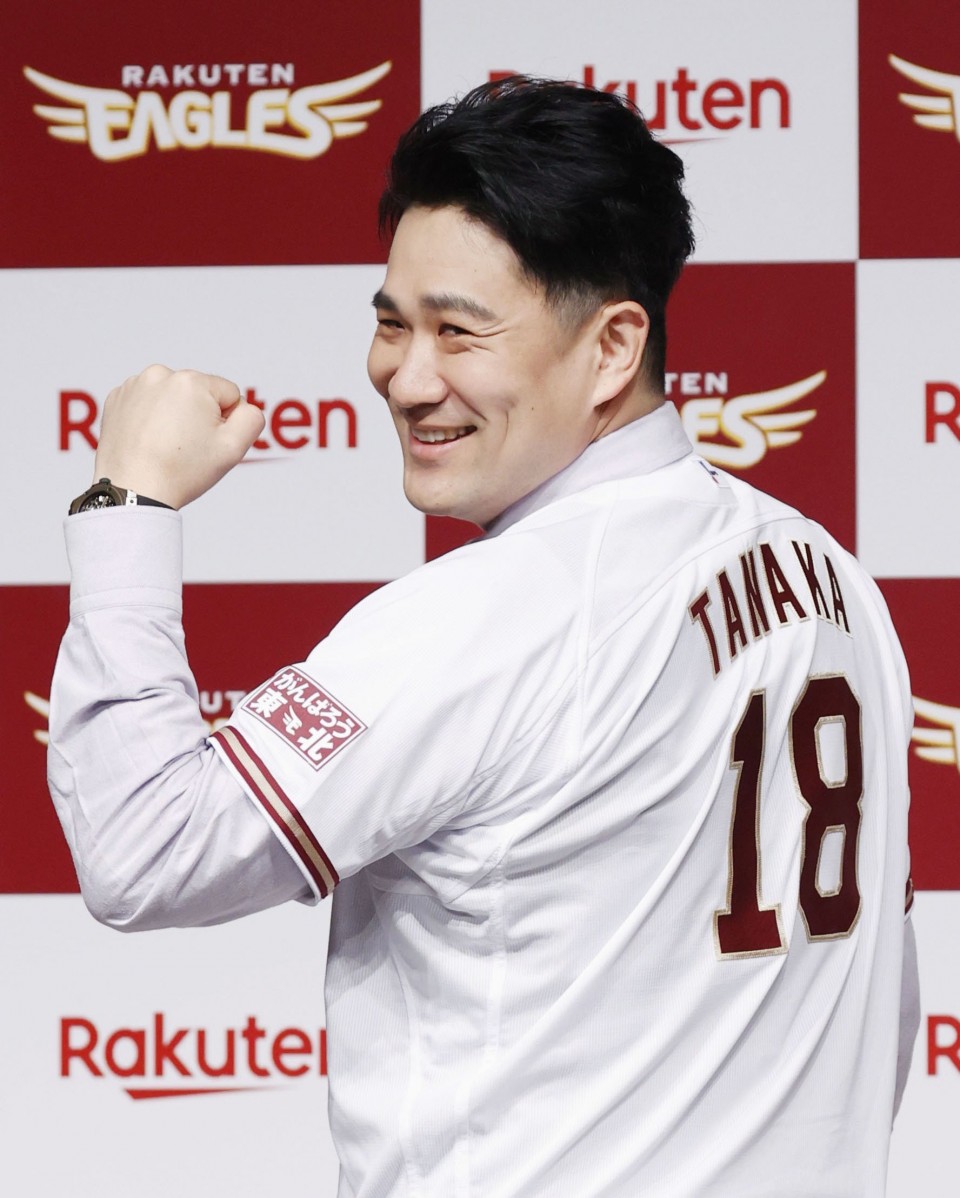 Former New York Yankees pitcher Masahiro Tanaka poses for a photo during a press conference in Tokyo on Jan. 30, 2021, on his return to the Rakuten Eagles. (Kyodo) ==Kyodo 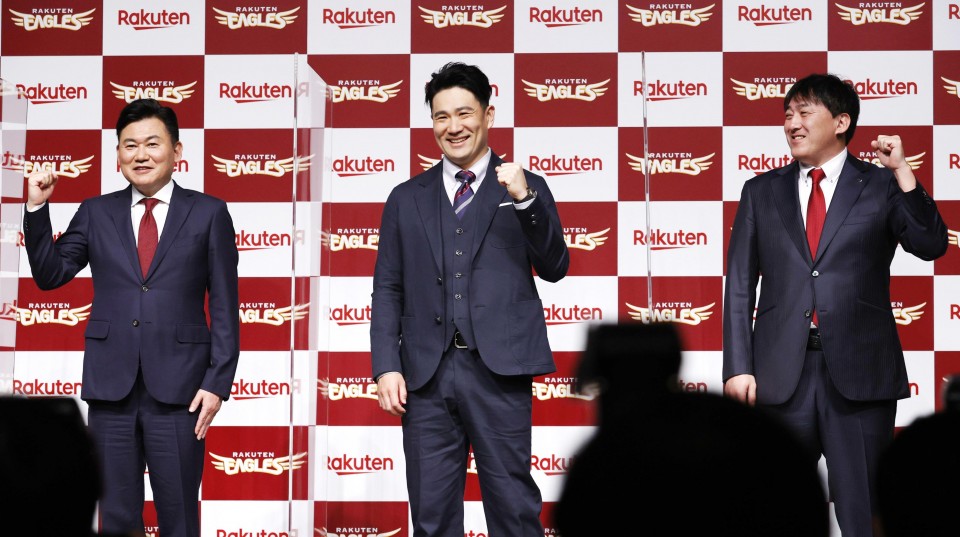 (From L) Rakuten Eagles owner Hiroshi Mikitani, former New York Yankees pitcher Masahiro Tanaka and Eagles manager Kazuhisa Ishii pose for a photo during a press conference in Tokyo on Jan. 30, 2021, on Tanaka's return to the Japanese club, with transparent acrylic screens set between them amid the coronavirus pandemic. (Kyodo) ==Kyodo