Harumi Yoshida is just one person who has seen his ability to travel curtailed by the lack of assistance at train stations.

A resident of Oita Prefecture, southwestern Japan, Yoshida often took a train to visit a friend, but the 67-year-old wheelchair user has been unable to do so since 2015 when a local station's staff was cut entirely. 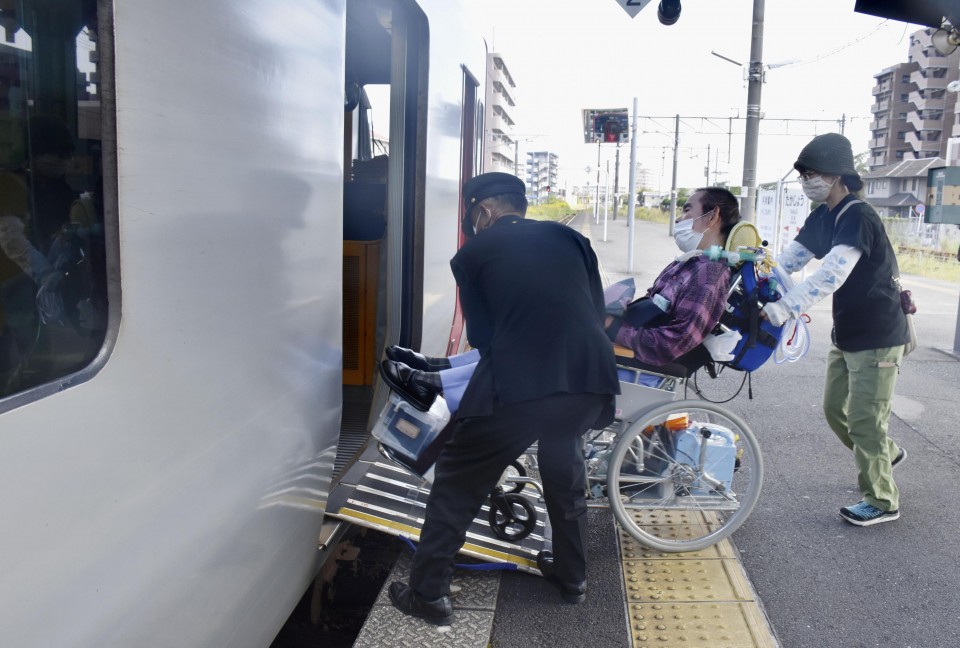 Harumi Yoshida (C) is assisted on to a train by a station staffer (L) at JR Takajo Station in Oita, southwestern Japan, on Oct. 14, 2020. (Kyodo)

"When station staff were there, I wasn't worried always because they helped me whenever I needed their assistance such as when I had to negotiate the stairs. But after it became unmanned, I can't use that station anymore without planning ahead," said Yoshida, who has difficulties vocalizing and communicates by pointing to Japanese characters on a board using an implement held in his mouth.

To make matters worse for Yoshida, who is paralyzed and suffers from cerebral palsy, the Kyushu Railway Co.-operated station nearest his home will also soon be without staff, worsening his sense of isolation.

Alarmed at the increasing number of stations without workers in his prefecture, causing inconvenience and possible safety concerns, Yoshida and two fellow disabled people came together to file a lawsuit against Kyushu Railway at the Oita District Court in September.

The plaintiffs claim the company has violated their constitutional right to freedom of movement and that the railway company has also breached a law prohibiting discrimination against the disabled, they say.

The lawsuit is the first filed by disabled people against a train operator over a decision to cut staff at stations, according to the plaintiffs.

Among train stations operated by the railway company known as JR Kyushu, over 53 percent were unstaffed as of November, according to the company.

The removal of employees due to labor shortages and for cost-cutting reasons has accelerated, especially in rural areas of the country, with 80 percent of Shikoku Railway Co.-run stations in western Japan and 74 percent of stations operated by Hokkaido Railway Co. in northern Japan going without, according to the railroad companies.

The problem is making life more difficult for Yoshida and people like him, forcing them to plan ahead to ensure there is sufficient support at stations they want to use.

Yoshida says whenever he goes to the station close to his home, he uses an intercom to contact staff because he is unable to use an access bridge due to there being many steps to the platforms.

Station staff let him cross a railway track to reach the platforms by passing through a door designated for the purpose.

At the same time as it removes staff from stations, JR Kyushu has been installing elevators to advance its "barrier-free" initiatives.

But the increasing access to elevators has not eased Yoshida's anxiety due to his need for a ventilator which is attached to his approximately 1.5-meter long wheelchair.

His concerns are life and death, best demonstrated by an incident in which he nearly caught one of his ventilator tubes in an elevator door at a station he regularly uses. He said the elevator is too small for people with chairs like his.

He is also worried about being trapped inside a malfunctioning elevator and what the ramifications would be if help was far away.

"Eight hours, which is the battery life of my ventilator, would be my time limit," Yoshida explained.

After filing the lawsuit, he and his fellow plaintiffs were subjected to criticism on the internet, with people calling them "selfish" for initiating the case. But Yoshida will not budge.

"If there is no staff at a station, elderly people and local residents will face inconvenience as well. It is my destiny to stand on the frontline (of the fight)," he said.

There are more than 737,000 wheelchair users in Japan, according to recent statistics compiled by the Ministry of Health, Labor and Welfare from data related to long-term insurance system users.

The Ministry of Land, Infrastructure, Transport and Tourism is studying possible measures to secure safe and improved access for people with disabilities at unstaffed stations as it works toward formulating guidelines next summer.

"I hope (the lawsuit will make) a society in which everyone can live easily," Yoshida said.