Ruling and opposition parties on Monday jointly submitted a bill to recognize those who give birth to a baby using donated eggs or sperm as legal parents, a move that could help conclude a decades-old debate in Japan.

The current civil law does not have a provision regarding in-vitro fertilization involving a third person, sparking discussions about how to eliminate legal uncertainties with regard to the parentage of such children. 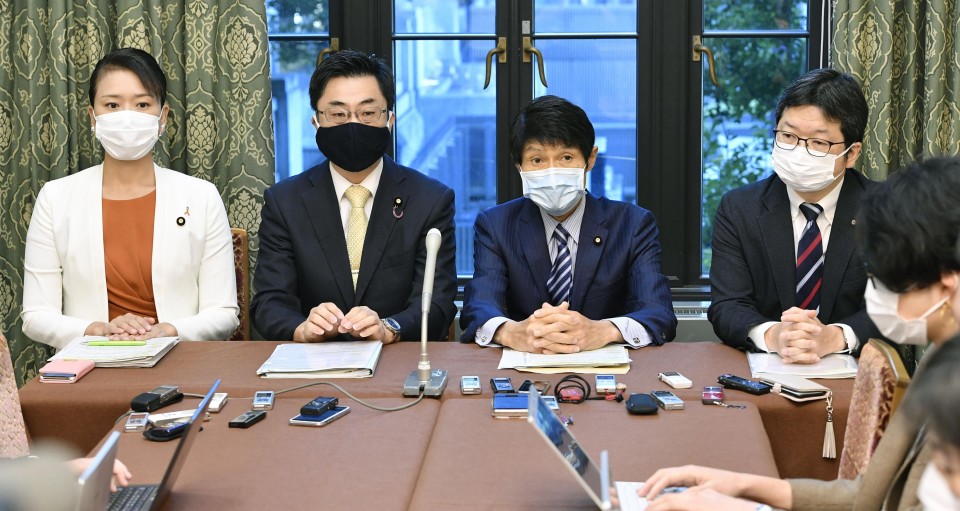 Representatives of Japan's ruling and opposition parties meet the media in Tokyo on Nov. 16, 2020, after jointly submitting a bill to the House of Councillors to recognize those who give birth to a baby from donated eggs or sperm as its legal parents. (Kyodo) ==Kyodo

But the bill does not recognize the rights of such children to seek disclosure of the identities of egg or sperm donors, triggering criticism from groups representing them as well as the Japan Federation of Bar Associations.

It also postpones responses to some other issues such as the buying and selling of eggs and sperm as well as whether to approve surrogacy. Lawmakers said they will consider legal action to address those issues over the next two years.

The bill also does not reflect the recently increasing demand among sexual minority couples and single women who wish to have children.

The bill is expected to be enacted during the current Diet session through early December with support from parties including Prime Minister Yoshihide Suga's Liberal Democratic Party and the largest opposition Constitutional Democratic Party of Japan.

It stipulates that a woman who gave birth is the mother of the child when she used a donated egg, and that a husband cannot deny he is the father after he consented to his wife using sperm donated from a third person.

The Ministry of Health, Labor and Welfare has only allowed egg donations from a third person to married couples who cannot have a baby of their own. It has also excluded women with aged ova as recipients.

In Japan, such fertilization has been conducted at a limited number of facilities and many patients, mostly older women, have given birth to children after receiving eggs abroad.

The number of patients seeking treatment overseas through mediators has increased in recent years. But problems over sperm donation between individuals via the internet have been on the rise.

The debate over donating eggs and sperm became active in Japan after a doctor in Nagano Prefecture announced in 1998 he had carried out in-vitro fertilization for a woman using eggs donated by her younger sister.

In 2003, a panel of the ministry released a report that allowed egg and sperm donation under certain conditions. The report also called for a legal system to allow children aged 15 or older to request disclosure of who donated eggs or sperm.