Two key staff of former Prime Minister Shinzo Abe are suspected of having spearheaded the decision to cover part of the costs for dinner functions held for his supporters in a potential violation of the political funds control law, sources close to the matter said Thursday.

The scandal, which centers on functions hosted by a supporters' group for Abe from 2013 to 2019, could be a potential blow to Prime Minister Yoshihide Suga as he served as chief Cabinet secretary under Abe, the longest-serving Japanese leader, before taking office in September. 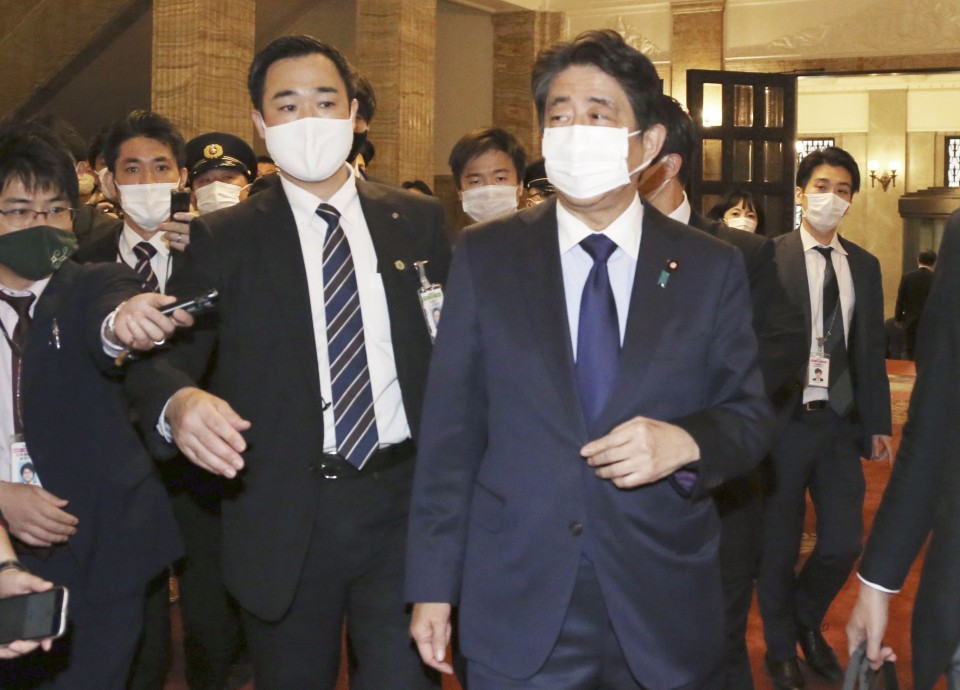 One of Abe's secretaries who heads the supporters' group and a person in charge of accounting at his fund management organization are believed to have understood they would need to cover the shortfall for the functions after receiving cost estimates.

The total bills for the dinner functions held at two hotels in Tokyo on the eve of annual cherry blossom viewing parties exceeded 20 million yen ($192,000) over a five-year period through last year, far higher than the amounts collected from the sale of tickets.

According to the sources, banquet attendees, many of whom were voters in Abe's constituency in Yamaguchi Prefecture, western Japan, were charged 5,000 yen each, even though such events at the five-star hotels normally cost about 11,000 yen or more per head.

Abe's office is suspected of discarding receipts issued by the hotels to the fund management organization, which is believed to have covered a shortfall of over 9 million yen, the sources said. No records of the payments were found in income and expenditure reports on political funds.

Prosecutors have questioned multiple people close to Abe, with at least one confirming that some costs were covered by the organization, according to people familiar with the matter.

Abe denied any wrongdoing after the scandal came to light in November last year.

Japan's political funds control law stipulates that the person in charge of accounting is responsible for recording all income and expenditure in reports on political funds. As such, Abe's criminal liability would extend only to negligence in the assignment and supervision of his accountant.

The annual public cherry blossom viewing party itself was another cause of controversy for the former leader as he has been criticized for inviting hundreds of his backers to the taxpayer-funded events.

Suga said upon taking office in mid-September that he would not continue the tradition of holding state-funded cherry blossom viewing parties. But the current investigation has once again drawn attention to allegations of cronyism that dogged Abe over the controversial events.

Regarding criticism about the opaque selection process for guests, Takashi Mikuriya, a professor emeritus of political science at the University of Tokyo, said, "The Abe administration avoided taking responsibility, and the Suga administration is also trying to escape by pinning it on the previous administration."

But Mikuriya said Suga could be held accountable depending on developments in the investigation.

"The public is now taking a harsher view of previous explanations that were given," he said.

Abe's office may have disposed of receipts for hotel functions