The couple in a photo seen staring at Hiroshima's devastation from the top of a building a year after the western Japan city was atom-bombed in 1945 had been a mystery since the picture was found about four years ago at a U.S. college.

But now that the black-and-white photo has been colored with the help of artificial intelligence and published 74 years later, Kiyoshi Kawaue, 90, has come forward to identify the couple as himself and his late wife, who were yet to marry at the time. 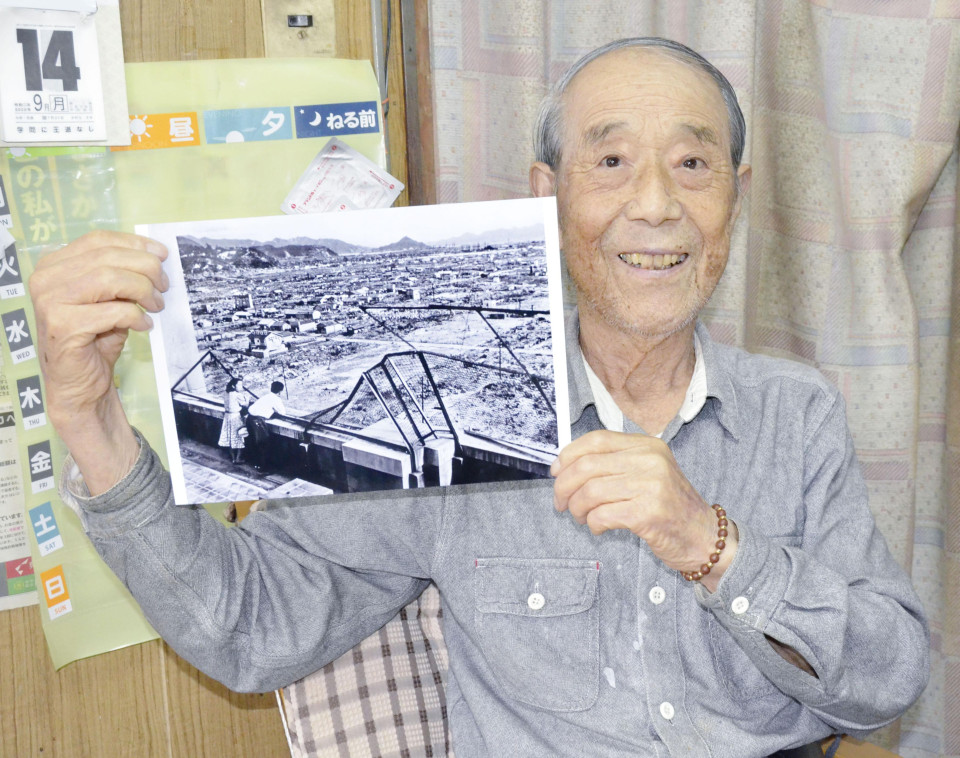 Photo taken on Sept. 22, 2020, shows Kiyoshi Kawaue holding a photograph he took of a couple looking out at a burnt field from the roof of a department store in Hiroshima the year after the atomic bomb was dropped. (Kyodo)

"The ones in the picture are my wife and I," Kawaue said, expressing delight as it "brought back memories." Yuriko Kawaue passed away this January aged 90.

The photo is part of a book published this summer under the (roughly translated) title "Prewar Era and War Recollected by AI and Colored Photos" by University of Tokyo student Anju Niwata and Hidenori Watanabe, a professor at the university's graduate school.

Watanabe found the photo, taken on the roof of a department store in the summer of 1946 by a Kyodo News reporter for a feature story on the first anniversary of Japan's surrender in World War II, at Wilmington College's Peace Resource Center in Ohio.

Kawaue, who used to work in oyster farming, said he and Yuriko got married in 1951 and had a daughter.

When the photo was taken, they were both 16 years old, and were likely talking about the names of islands in the Seto Inland Sea which Hiroshima faces, he said.

The book's co-authors had a reason to believe the two people in the photo were the Kawaues because his account that there was another group shooting the scene is supported by a video taken by U.S. troops from the same angle kept in the U.S. National Archives.

The photo drew attention on Twitter in 2018 when Watanabe posted it on Aug. 6, the date the atomic bomb was dropped on Hiroshima, for the contrast between the bomb's catastrophic effect and the young couple.

The image shows a city still far from being rebuilt a year after the bombing but somehow conveys "a message of hope sprouting from the ashes that might have impressed people," the professor said.

He said the photo drew many comments about hope for the future and how precious peace is.

Kawaue said, however, he had yet to look toward the future at that time, having lost friends in the bombing, been exposed to radiation himself, like his wife, and seen many survivors suffer sickness from such exposure.

"It was still a scorched field that seemed as if smoke was about to rise again," he said, recalling the sight at the time. He said he had wondered when Hiroshima would return to its original state.

Going on a date with Yuriko was one of the few things he was looking forward to and it made him happy just walking around the town, where no cafe or any other dating site could be found, he said.

Seeing himself and Yuriko in the photo book that an acquaintance happened to show him this summer came as a sweet surprise to Kawaue. It was the first time he had seen the photo as he had not received a copy even though the reporter who took it had promised to send one and had asked for his address.