Japan on Saturday commemorated the 75th anniversary of its surrender in World War II, with the emperor and empress, the prime minister and a limited number of people attending a ceremony to mourn the war dead that was scaled back due to the novel coronavirus pandemic.

Prime Minister Shinzo Abe vowed not to repeat the tragedy of the war, saying, "We will never forget that the peace and prosperity we are enjoying today are built on the ultimate sacrifices of the war dead."

Abe, who is eager to revise the postwar pacifist Constitution, did not refer to Japan's wartime aggression, in line with his statements at previous memorial ceremonies since taking office in 2012. 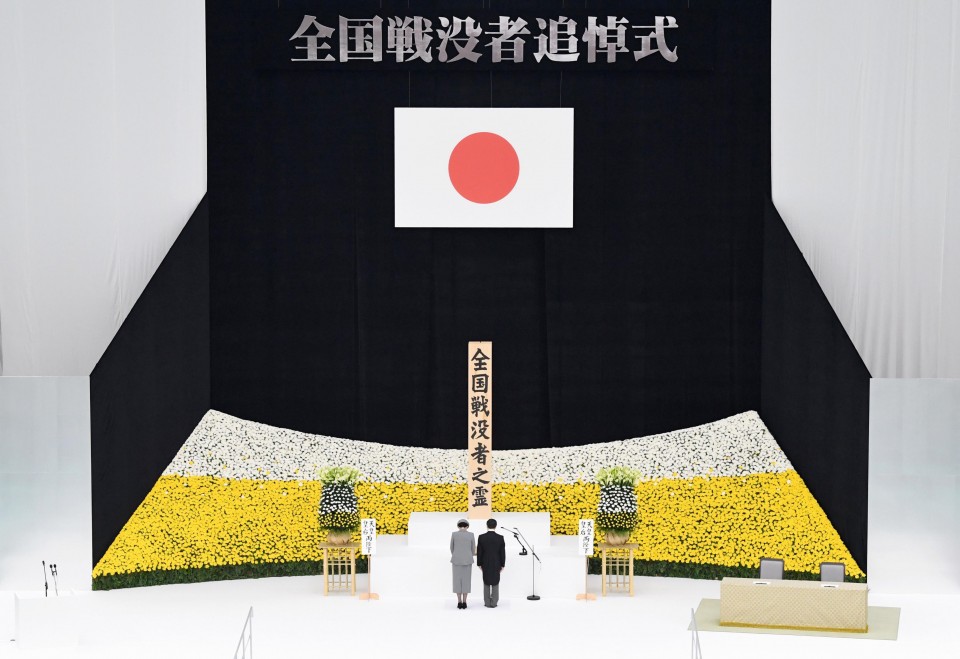 Meanwhile, Emperor Naruhito, the country's first emperor born after the war, made a rare public appearance amid the pandemic with his wife Empress Masako and expressed "deep remorse" during the annual memorial service, as he did last year.

"Looking back on the long period of postwar peace, reflecting on our past and bearing in mind the feelings of deep remorse, I earnestly hope that the ravages of war will never again be repeated," he said in his address.

With the coronavirus spreading across the country, the 60-year-old emperor who ascended the throne in May last year has postponed or canceled all of his regular regional tours.

A moment of silence was observed at noon for the approximately 2.3 million military personnel and 800,000 civilians who perished in the war, including those killed in the U.S. atomic bombings of Hiroshima and Nagasaki.

"We need to pass on the memories of the tragedy and terror of war in which even innocent civilians can be involved, as well as the preciousness and importance of peace," Hideo Sugiyama from Shizuoka Prefecture said at the ceremony, representing relatives of the war dead. Sugiyama, 82, lost his father in the Philippines. 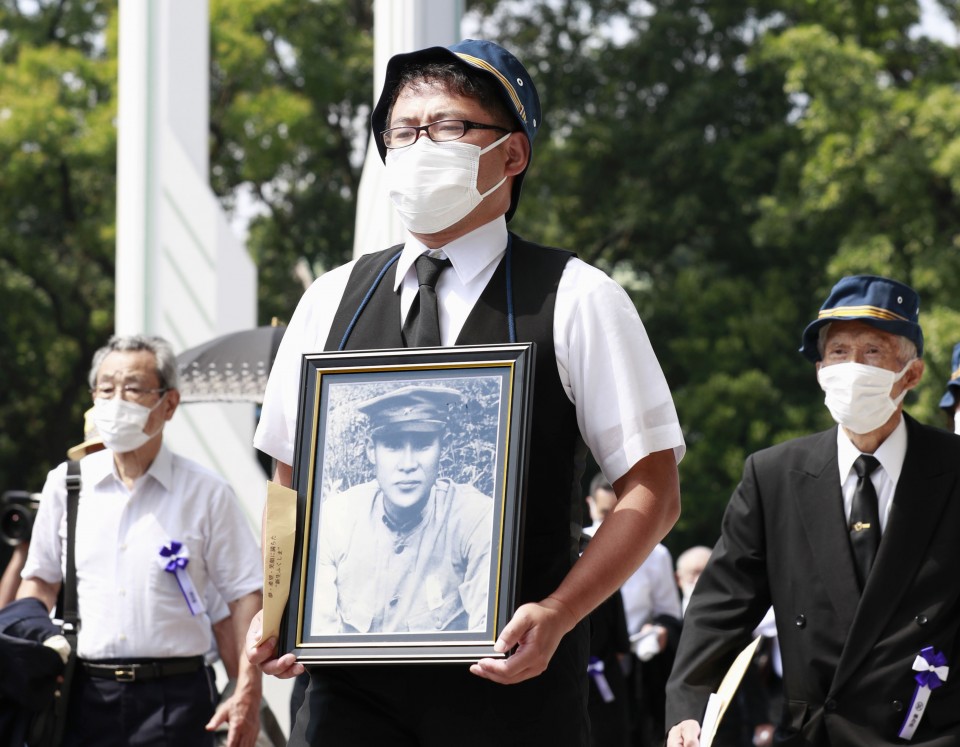 Among the participants, the oldest attendee was 93-year-old Shoji Nagaya from Hokkaido, while the youngest was 12-year-old Yukika Ida from Gunma Prefecture.

The ceremony was held in Nippon Budokan, with around 540 people attending, the lowest on record since the government started holding the event in 1963 and less than 10 percent of the number last year, according to the Ministry of Health, Labor and Welfare.

The attendees wore masks, sat in chairs placed over a meter apart and did not sing when Japan's national anthem "Kimigayo" was played as part of measures to prevent the spread of the virus.

While limiting the number of attendees, the government livestreamed the ceremony on its YouTube channel for the first time.

Relatives of the war dead in 20 of Japan's 47 prefectures did not attend the memorial service due to the virus spread, according to the ministry.

"By any means, I wanted to go to (Nippon) Budokan (to attend the ceremony) and Yasukuni shrine where my father sleeps," said Akira Yamashita, 84, who watched the ceremony on TV.

The shrine located near the venue of the ceremony honors convicted war criminals along with over 2.4 million war dead.

Yamashita, a resident in Matsuyama, Ehime Prefecture, who lost his father Tokutaro at the age of eight in the war, said he "was looking forward to exchanges" with other relatives of the war dead at the ceremony.

At Yasukuni shrine, there was a long line of visitors who maintained social distancing.

"We need to renew our determination that war should never happen again," said Kazue Koike. The 76-year-old Tokyo resident visits Yasukuni every year.

"I was born right before the end of the war. There must never be another war," said Katsuji Yakushiji, 75, as he visited Chidorigafuchi National Cemetery in the capital where the remains of around 370,000 unidentified soldiers and citizens are interred.