Japanese Prime Minister Yoshihide Suga on Tuesday pledged low-interest loans of 50 billion yen ($473 million) to Indonesia to help it cope with the economic fallout from the coronavirus pandemic in talks with the Southeast Asian nation's President Joko Widodo.

In the summit at the presidential palace in Bogor, south of Jakarta, the leaders also agreed to strengthen security cooperation and begin discussions on resuming business travel between their countries. 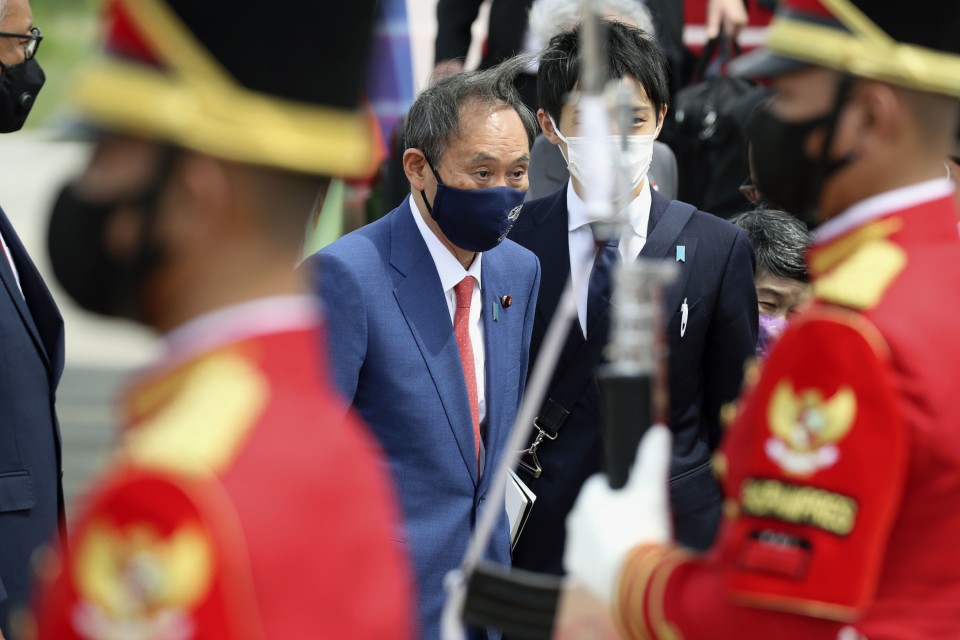 Japanese Prime Minister Yoshihide Suga arrives at Soekarno-Hatta International Airport in Indonesia on Oct. 20, 2020, wearing a face mask amid continued worries over the novel coronavirus. The prime minister will meet with Indonesian President Joko Widodo on the second leg of his four-day trip to Vietnam and Indonesia, his first foreign trip since taking office the previous month. (Pool photo) (Kyodo)

Suga, on his first overseas trip since taking office in mid-September, is looking to foster closer ties with Southeast Asian countries to counter China's growing influence.

"We will promote further cooperation with Indonesia, which is a maritime state in the Indo-Pacific and a strategic partner, including in defeating the coronavirus together," Suga said after the meeting with Joko.

The low-interest loans will be used for Indonesia's measures against natural disasters, in addition to the nearly 32 billion yen in loans Japan gave in February this year.

This is intended to free up Indonesian resources to be used to fight COVID-19. The Southeast Asian nation has seen the worst outbreak in the region with more than 360,000 confirmed infections and more than 12,000 related deaths.

Suga said he agreed with Joko to resume travel between their countries for nurses and care worker trainees. Joko said the foreign ministers of the two countries will coordinate on the resumption of wider-scale business travel over the next month.

The world's fourth most populous country, Indonesia is an economic powerhouse in Southeast Asia and is the only nation in the region included in the Group of 20.

The president, widely known as "Jokowi," also said he called on Suga to help maintain order in the international community, making a veiled reference to the heightened tensions between the United States and China.

"The potential for multilateral cooperation is currently being threatened by a tough contest between world powers, and we are asking for Japan's help in returning things to normal," he said during a joint media appearance.

Suga arrived in Jakarta in the afternoon from Hanoi, where he met with his Vietnamese counterpart Nguyen Xuan Phuc on Monday.

The visit to Indonesia completes his four-day trip through Wednesday, during which he has sought to prove his diplomatic chops and promote the concept of a "free and open Indo-Pacific" in the face of China's maritime assertiveness.

Indonesia's exclusive economic zone overlaps with China's nine-dash line, which marks the world's second-largest economy's expansive claims in the South China Sea, while Vietnam is one of the claimants in territorial disputes in the area. Beijing also lays claim to Japanese-held islands in the East China Sea.

During the 80-minute meeting with Joko, Suga voiced "deep concern" over unilateral attempts to change the status quo in the South and East China seas, according to a Japanese government official.

The president expressed agreement and stressed the importance of "stability and peace based on the rule of law," the official said.

The leaders affirmed plans to hold a meeting between their countries' foreign and defense ministers at an early date. Since holding the first "two-plus-two" meeting in 2015, they have yet to sit together to discuss security issues.

Suga said he agreed with Joko to step up negotiations on a pact that would enable Japan to export defense equipment and technology to Indonesia, having reached an agreement in principle on a similar deal with Vietnam on Monday.