Prime Minister Yoshihide Suga on Monday defended his decision to block six scholars from joining a government advisory body, saying the unprecedented move was an appropriate use of his authority and had "nothing to do with academic freedom."

Suga is under fire for not approving nominees to the Science Council of Japan who have been critical of his predecessor Shinzo Abe's policies, such as his push to reinterpret the pacifist Constitution to allow the country to come to the aid of allies under armed attack in certain circumstances. 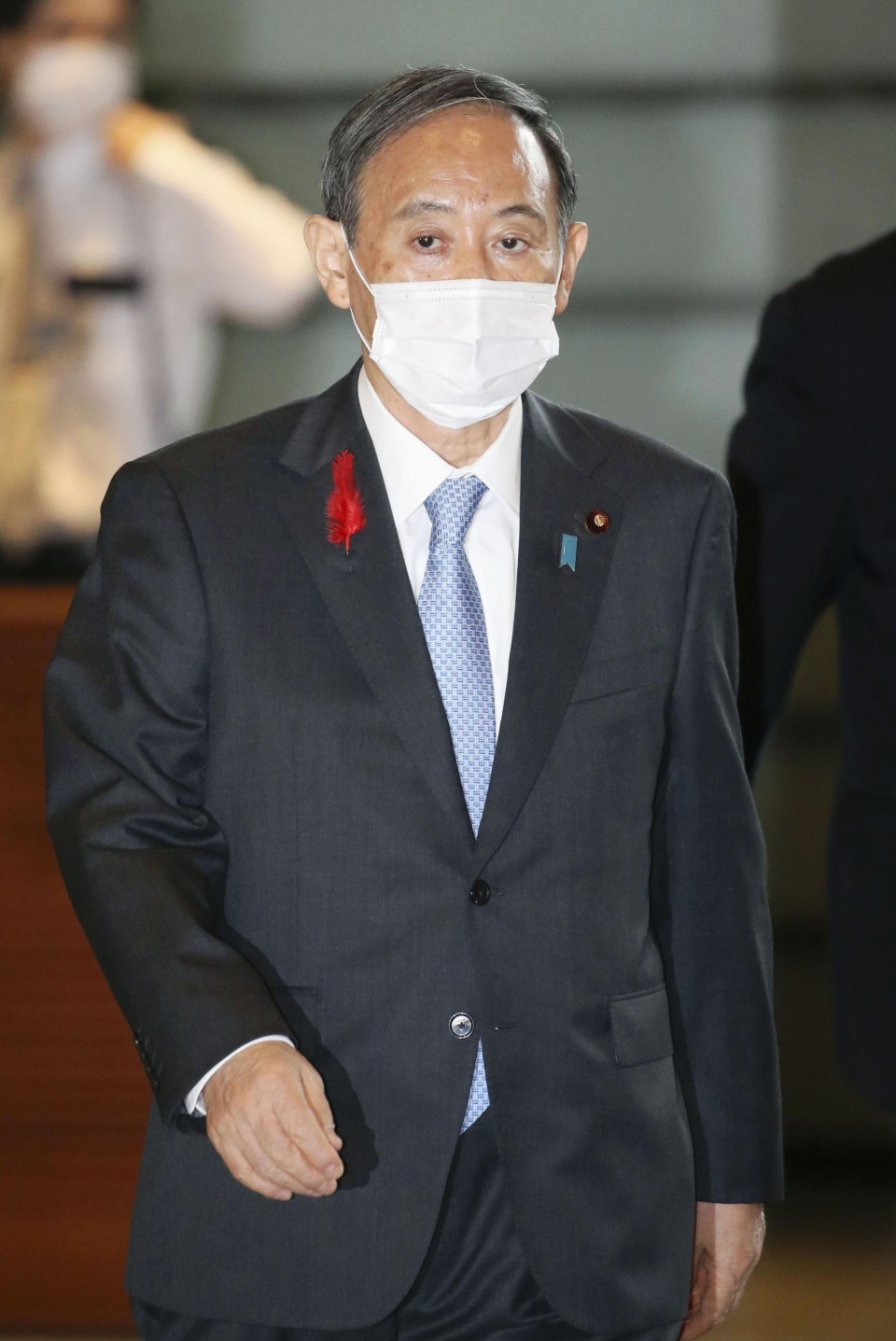 Japanese Prime Minister Yoshihide Suga arrives at his office in Tokyo on Oct. 5, 2020, wearing a face mask amid continued worries about the novel coronavirus. (Kyodo)

In his first group interview since taking office in mid-September, Suga said his decision was "absolutely unrelated" to the scholars' disapproval of the Abe administration, but declined to provide any reasons that they were unfit to sit on the council.

The furor over the refusal to endorse the nominees looks to become the first major test of the 71-year-old leader, who has pledged to inherit the previous government's major policies, with opposition parties planning to problematize his decision in the upcoming extraordinary Diet session expected to be convened in late October.

The council is under the jurisdiction of the prime minister but independently makes policy recommendations to the government, with half of its 210-person membership changing every three years.

Suga said he thought about "whether it was right to simply follow precedent" by rubberstamping nominees put forth by existing members, stressing that some 1 billion yen ($9.5 million) in taxpayer money goes into running the council and that its members are government employees.

"From that standpoint of making sure that the council will play a comprehensive and overarching role, I made the decision (to block the scholars)," he said.

The council's president, Takaaki Kajita, has asked the government to explain why the scholars were blocked, and for the decision to be reversed.

Suga, who served as chief Cabinet secretary during Abe's second stint in power from late 2012, enjoyed an initial wave of popularity.

The approval rating for his Cabinet stood at 66 percent in a Kyodo News poll conducted immediately after his inauguration, thanks, in part, to his common appeal as a farmer's son, and one who does not hail from a political dynasty.

Asked about the government's ongoing review of its national security policy, including discussions on whether to acquire enemy base strike capabilities, Suga reiterated that the roles played by Japan and its main ally, the United States, would remain fundamentally unchanged.

"We will continue considering options that remain within the bounds of the Constitution, comply with international law and follow Japan's exclusively defense-oriented policy," he said.

Suga is serving out the rest of Abe's term as leader of the Liberal Democratic Party, and therefore prime minister, through September next year. This means he will oversee the Tokyo Olympics and Paralympics, originally slated for this summer but postponed one year due to the global COVID-19 pandemic.

"We will take thorough measures against the novel coronavirus to ensure the games are safe and secure for both athletes and spectators," he said.

On foreign policy, Suga said he will continue Japan's strategic push for a free and open Indo-Pacific region while maintaining "stable relations" with neighboring countries, including Russia and China.