Tokai University, a four-time Japanese national university baseball champion, said Saturday it has suspended all activities of its baseball club indefinitely due to illegal drug use by several members.

According to the university, which has several campuses across the country, some members of the club based in Kanagawa Prefecture, near Tokyo, have admitted to the drug use at the team dormitory, saying they "used them out of curiosity." 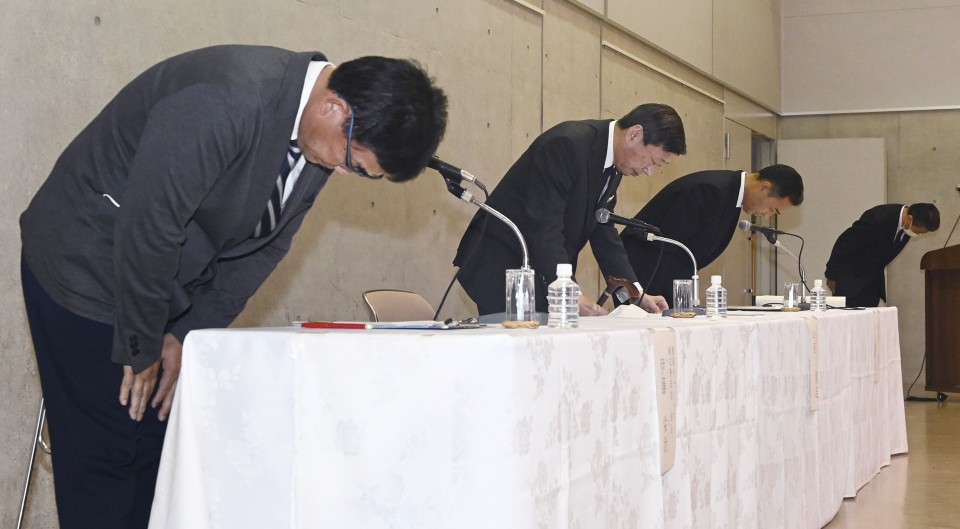 Tokai University's chancellor Kiyoshi Yamada (2nd from L) and other officials bow to apologize at a press conference in Kanagawa Prefecture on Oct. 17, 2020. (Kyodo)

In a press conference held Saturday, university officials said the Kanagawa prefectural police had raided the dormitory the same day, adding the university will cooperate fully with their investigation.

The university said it suspected that the members had used cannabis, but did not elaborate any further.

"We have betrayed the trust (of people), so I would like to offer an apology from the bottom of my heart," university chancellor Kiyoshi Yamada said during the press conference at the Shonan campus in Hiratsuka, Kanagawa Prefecture.

The Tokai University baseball club has won the league consisting of university clubs in the Tokyo metropolitan area 73 times. Many of its members have gone on to play professionally, with its well-known graduates including the Yomiuri Giants manager Tatsunori Hara and ace pitcher Tomoyuki Sugano.

The organizers of the league said the university has pulled out from the current season.