East Japan Railway Co. said Thursday it will move up the departure times of the last trains in the Tokyo metropolitan area by some 30 minutes from spring due to the dwindling number of late-night passengers amid the coronavirus pandemic.

The railway operator will change the schedules of most of its lines operated within a 100-kilometer radius of JR Tokyo Station so the last trains of the night will arrive at their final destinations by around 1 a.m. at the latest, company President Yuji Fukasawa said at a press conference.

The lines that will see a schedule change include the busy Yamanote loop line as well as the Chuo, Sobu and Keihin Tohoku lines, but shinkansen bullet train and limited express services will not be affected.

It will be the first time the company moves up the last train departure times across almost all lines in the Tokyo metropolitan area at the same time, according to the operator known as JR East. 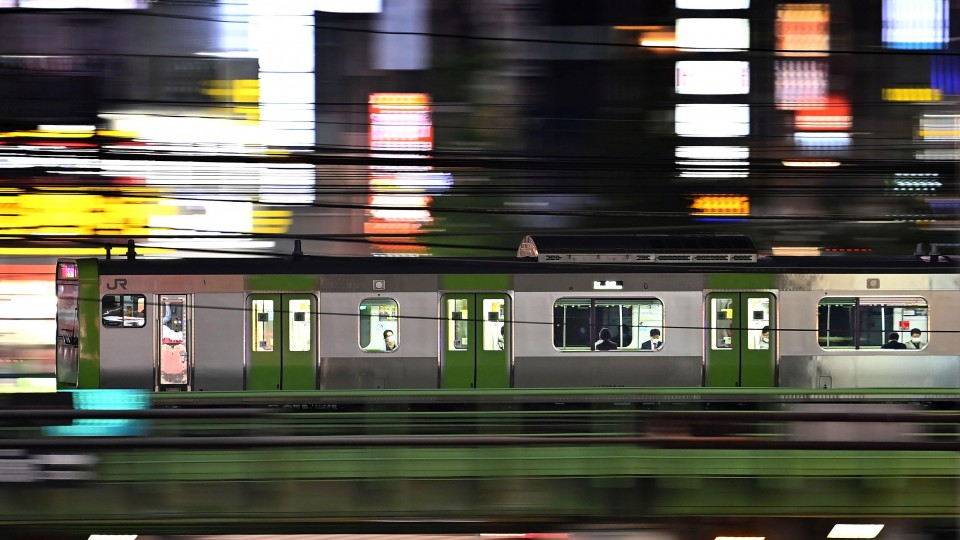 A Yamanote loop line train runs in Tokyo's Shinjuku Ward in May 2020. (Kyodo)

Fukasawa said the number of passengers traveling late at night has been on the decline in recent years, and the novel coronavirus outbreak has "further accelerated" that trend.

Japan on Thursday reported more than 650 new coronavirus infections, up from 594 the previous day. The nationwide cumulative total stood at over 71,000, including around 700 from the Diamond Princess, a cruise ship that was quarantined in Yokohama in February. The death toll reached 1,348.

Tokyo confirmed 211 additional virus cases the same day after 141 were confirmed on Wednesday, bringing the cumulative total in the capital to 21,339, the highest among Japan's 47 prefectures.

Fukasawa also said the move is aimed at improving conditions for maintenance workers who work overnight after the train service concludes.

On some lines, maintenance crews have to manually conduct work because the equipment that is usually needed cannot be installed in the time available, he said. The changes will give more time to the workers, and thus improve their efficiency, he added.

JR East is also considering pushing back the departure times of the first trains in the morning, Fukasawa said.

He also said the company is considering introducing a commuter pass that can only be used during off-peak hours and will be priced lower than the regular one.

Last month, West Japan Railway Co. said it will move up the times of the last trains on several lines, including the Osaka loop line, by some 30 minutes from next spring to create a better working environment for its maintenance staff.