Mariko Suga, the woman who became Japan's new first lady on Wednesday, gave a rare public speech before supporters of her husband in his constituency in Yokohama, near Tokyo, where the native of a rural town in the country's northeast started a political career more than 30 years ago.

"Thanks to you, people of Yokohama, who supported Suga despite his lack of local acquaintances or relatives, he was elected to the (Yokohama) city assembly 33 years ago," said the wife of Prime Minister Yoshihide Suga, who has earned a reputation as a devoted supporter of her husband's political endeavors from behind the scenes. 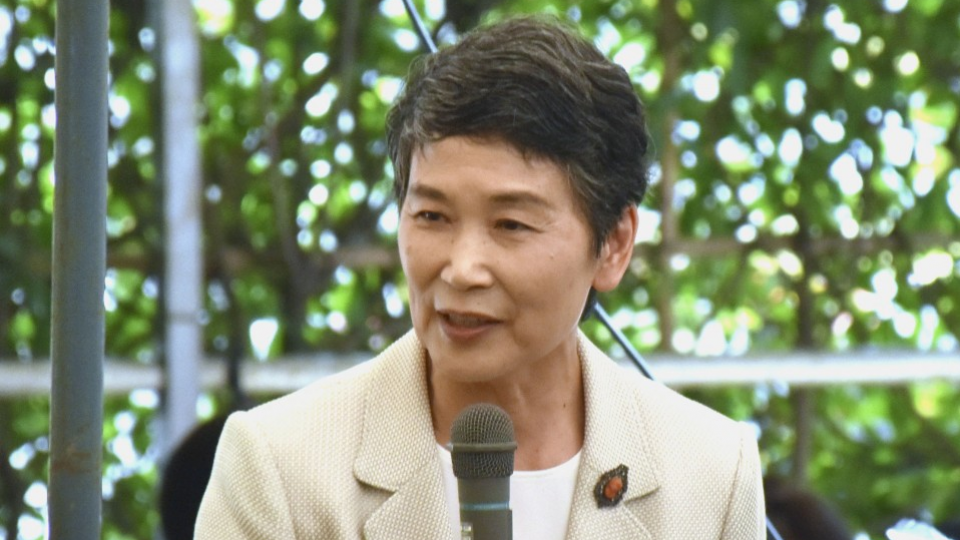 Newly elected Japanese Prime Minister Yoshihide Suga's wife Mariko speaks to his supporters in Yokohama, his constituency, near Tokyo on Sept. 16, 2020, after parliament chose him as Japan's new leader. (Kyodo)

"He then became a member of parliament, and chief Cabinet secretary, and today, he was elected prime minister. I am immensely indebted to you for your support," the 67-year-old said in a speech that lasted roughly 60 seconds, bowing deeply to supporters who responded with a storm of applause.

Her quiet demeanor is a stark contrast to that of Suga's predecessor Shinzo Abe's wife and former first lady Akie, a socialite who has often posted on social media about meeting with celebrities and other public figures.

Some speculate that Mariko, a native of Shizuoka Prefecture, central Japan, will likely shrink back from diplomatic engagements as the first lady.

She has tirelessly assisted Suga throughout his career, even though he has rarely, if ever, slept at their home in Yokohama in recent years, instead staying in lawmakers' accommodation near the premier's office to be able to swiftly respond to any emergencies.

Suga, who is also known for his aversion to the limelight, has said he had a hard time convincing his wife to let him run for leader of the ruling Liberal Democratic Party. But in the end, she chose the tie he wore on Sept. 2 when he announced his candidacy.

The couple met while Suga was working as a secretary for the late Hikosaburo Okonogi, a former House of Representatives lawmaker, and have three sons.