Since he was in kindergarten, Eita Nishitarumizu traveled Japan with his beekeeper parents as they sought out the country's most flavorful honey.

Now 26, Eita, whose family runs the Nishitarumizu Bee Garden based in Minamikyushu, Kagoshima Prefecture, is the one his family relies on to traverse the Japanese archipelago from their home in the south to Bifuka, Hokkaido, in the north to produce the high-quality honey they sell.

Known as migratory beekeepers, their method became widespread in Japan after the Taisho period (1912-1926). But the number of beekeeper families has dwindled due to a graying populace and fewer plants that produce the all-important nectar.

In late July, Eita lined up his beehives after arriving in Bifuka. Wings were abuzz as the insects zipped about the box containing the frames on which the honeycomb is formed.

"It is a good indication that the bees are healthy if they glisten as if they were soaked in oil," said Eita. "This is also a rule of thumb for how much honey is inside the beehives," he said with a smile while pulling out a frame dripping with the golden goo.

Eita's grandfather Tadashi, now 82, started the family's migratory beekeeping business around 1960 after training under a local apiarist in Kagoshima. They gradually expanded their bases to Bifuka and other regions of Japan. 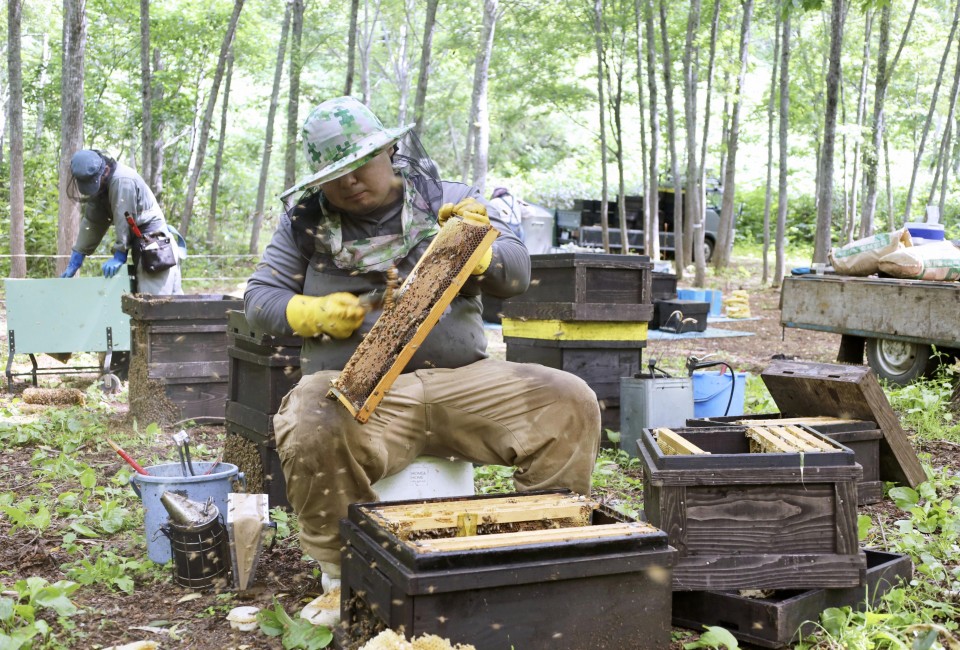 Eita Nishitarumizu checks a honeycomb as bees buzz around him in Bifuka, Hokkaido on July 27, 2020. (Kyodo)

FEATURE: Japanese researcher's journey as a "winterover" at South Pole

Known as translocation beekeeping, the method involves hives being set up in various parts of the country during specific seasons of the year, allowing the resident bees to venture into the countryside to collect pollen and forage nectar from targeted species of plant from which they produce high-grade honey.

The system provides a stress-free life for the bees, allowing them to do their job as well as they can, and it gives the migratory beekeepers, who pack up their hives at the end of the bloom and move on to the next place, a product superior to most others.

In recent years, they set hives in Satsumasendai, Kagoshima, in April before moving north following blooming peaks in various plants such as mandarin oranges in Isahaya, Nagasaki Prefecture, acacia in Odate, Akita Prefecture, and thistle in Monbetsu, and Bifuka, Hokkaido.

But this year, that all changed due to the coronavirus outbreak, meaning Eita, his younger brother, Jun, 20, and his 72-year-old grandmother were the only three family members to make the journey to Hokkaido. It was the first time Eita was put in charge of the sites.

"I felt how difficult it is to give directions. Technically and mentally speaking, I became in awe of my father and grandfather's talent," Eita said.

Eita holds many memories from Bifuka, having lived there for around a year in third grade when there was a depopulation crisis. Eita helped the local elementary school boost its student body by staying put rather than returning home to Kagoshima.

"I want to make the honey of Bifuka as renowned a Hokkaido brand as the milk, vegetables, and other items," Eita said.

Bees do not enjoy high temperatures, so Eita drives almost nonstop to let the breeze of the movement keep them cool.

Despite having to be constantly on the move, Eita looks on the bright side, saying when he does get to stop, it is worth it.

"As a migratory beekeeper, I can reunite with friends from my childhood, and it is refreshing because of all of the new people I get to meet in different regions," he said.

According to the Ministry of Agriculture, Forestry and Fisheries, there were 4,270 applications from migratory beekeepers wanting to traverse Japan's prefectures in 1985, but that number dropped to 2,477 in 2018, revealing the shortage of carriers. The area of nectar-producing plants also fell by more than two-thirds from approximately 370,000 hectares in 1985 to 120,000 in 2018.

Even so, Eita believes there is a lot of uncharted territory for those who allow themselves to be caught in the migratory beekeeper honey trap.

"There is a strong image of beekeepers falling under the three 'D' jobs -- demanding, dirty and dangerous -- but I want to appeal especially to the younger generations using social media as a tool. It would be great to have more colleagues who understand how fascinating it can be to work with honeybees."