Since the outbreak of the coronavirus, there have been increasing reports that foreigners living in areas with prominent international communities in Japan are being subject to discrimination and hateful remarks.

"Shitty foreigner, corona." A 22-year-old Indian student at Ritsumeikan Asia Pacific University was targeted by such a verbal attack while walking around JR Beppu Station, Oita Prefecture in mid-August. 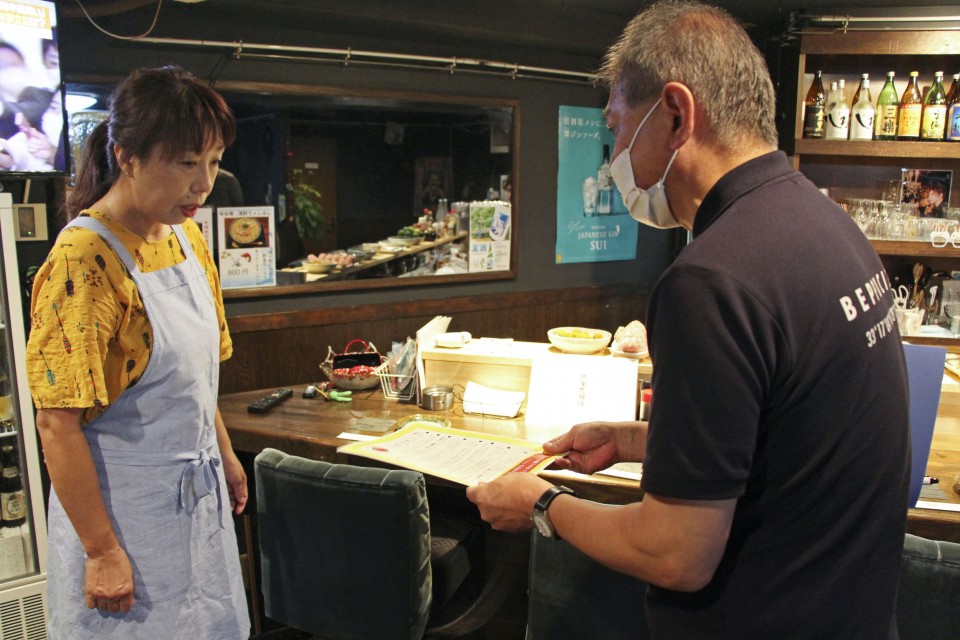 A city government official (R) distributes a flyer to an eatery owner in Beppu, Oita Prefecture, in August 2020, urging people not to discriminate against foreigners amid the coronavirus pandemic. (Kyodo)

The comment came from three Japanese men apparently in their 30s.

Although the student's university, also located in Beppu, southwestern Japan, had reported from Aug. 8 that a dozen or so exchange students had tested positive for the virus, he was not one of them. He attempted to object, but the men told him, "We're social distancing. Get lost," so in the end he could do nothing.

Such prejudice against foreigners is seen to be the result of an excessive fear of infection and ignorance among those who lack opportunities to communicate with the international communities with which they reside.

The some 2,700 exchange students at APU, who make up almost half of its enrollments, usually forge deep connections with the local community through part-time jobs and extracurricular activities.

But since the outbreak of the coronavirus, the city has received reports that some hair salons and dining establishments have put up signs denying entry to students from the university.

In response, it immediately set about distributing around 1,500 notices to business operators reminding them that "the fight is against the virus, not people." 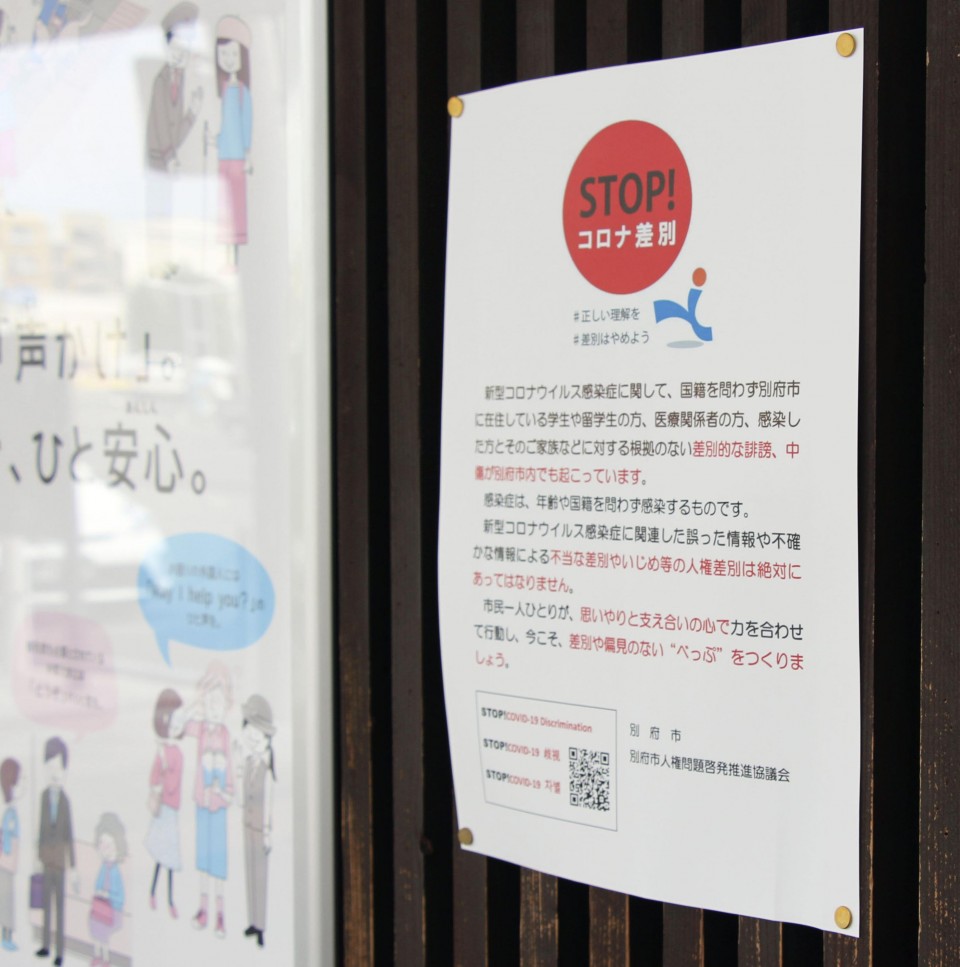 A flyer urging people not to discriminate against foreigners amid the coronavirus pandemic is seen posted at JR Beppu Station in Oita Prefecture on Sept. 4, 2020. (Kyodo)

Some businesses in Yokohama's Chinatown near Tokyo also reported receiving hate mail in March blaming Chinese people for the coronavirus outbreak, with messages such as "Get the hell out of Japan."

According to a May survey of around 400 foreigners living in Fukuoka Prefecture by monthly multilingual magazine Fukuoka Now, around 20 percent of respondents said they have experienced some sort of discrimination in relation to the coronavirus.

Toshihiro Menju, managing director and chief program officer at the Japan Center for International Exchange, believes that ensuring local residents and foreigners have opportunities to interact is the solution to eradicating discrimination and prejudice.

"The relationships built in the community on a daily basis thrive during extraordinary times," he said.

With foreigners, many of them Japanese-Brazilians, accounting for around 10 percent of the population of Minokamo, Gifu Prefecture, the city has been working to strengthen information sharing with its international community.

City officials, together with a pastor with interpreting experience, are visiting around 10 churches with foreign congregations to urge them to take thorough measures against the coronavirus' spread.

"Local governments should treat foreign residents in the same way as Japanese residents, and make their guidelines and other policies clear," said Menju.