At least 13 people were injured as an earthquake with a magnitude of 5.0 shook central Japan Friday, Japan's weather agency and local authorities said.

The quake struck at around 9:10 a.m. in Fukui Prefecture and originated at a depth of about 10 kilometers, the Japan Meteorological Agency said. No tsunami warning was issued following the temblor. 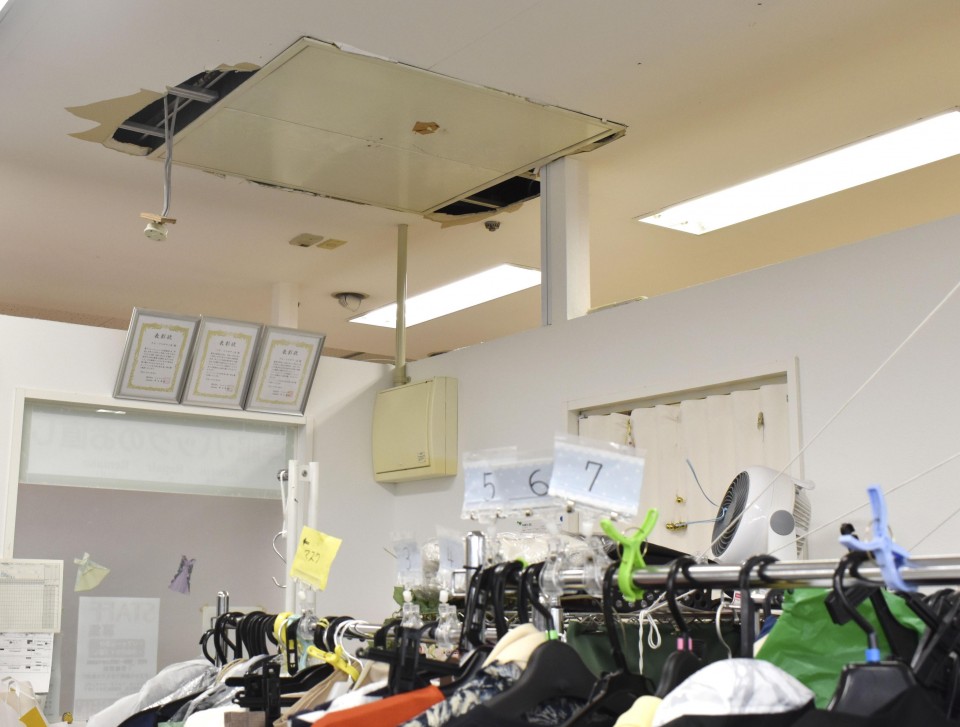 Part of the ceiling at a shopping mall in Sakai, Fukui Prefecture, is damaged as an earthquake with a magnitude of 5.0 shook central Japan on Sept. 4, 2020. (Kyodo)

The quake registered lower 5 on the Japanese seismic intensity scale of 7 in the city of Sakai, a level of shaking described as frightening to many people and creating a need to hold onto something stable.

It is the first time for Fukui Prefecture to observe such seismic intensity since March 1963, when a magnitude 6.9 quake rattled the region.

In June 1948, a magnitude 7.1 quake struck Fukui and the surrounding area, leaving more than 3,700 people dead and flattening over 34,000 houses, according to Cabinet Office data.

Among the 13 people injured by Friday's quake was a woman in her 80s who fractured her foot as she fell when getting out of a car in the city of Fukui, and 12 others who sustained minor injuries, the Fukui prefectural government said.

The weather agency urged local residents to be alert for another possible temblor of the same size in around a week.

No abnormalities were found in the nuclear power plants and affiliated facilities in Fukui Prefecture after the quake, Kansai Electric Power Co. said.