At least 20 people have been injured on Japan's southwestern main island of Kyushu as Typhoon Maysak passed near the region before weakening Thursday, while concerns are growing that a more powerful typhoon may make landfall in the area on Sunday or Monday.

A Japan Meteorological Agency official warned at a press conference that Typhoon Haishen could bring record rainfall, high waves and high tides, urging residents of Kyushu and Okinawa Prefecture to brace for the storm by Friday.

"People in affected areas should not hesitate to evacuate their homes and find shelter, even though they may be worried about becoming infected with the new coronavirus," the official said. 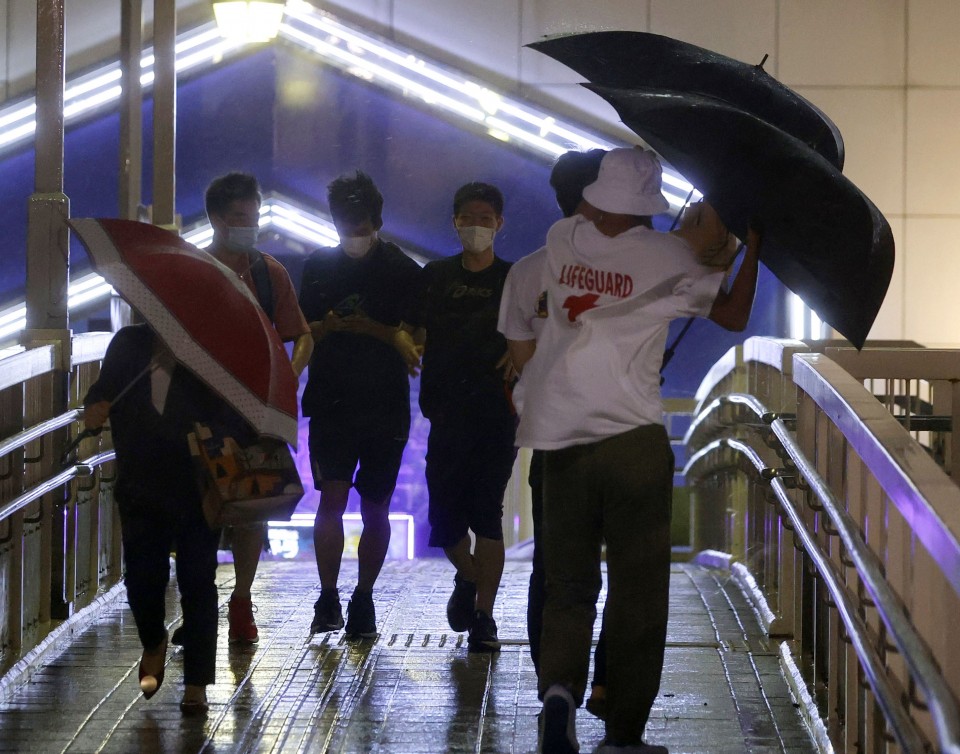 People walk in Nagasaki, southwestern Japan, on Sept. 2, 2020, in strong winds brought by the approach of Typhoon Maysak. (Kyodo)

In an online meeting with government officials earlier in the day, Ryota Takeda, minister for disaster management, urged people to brace for the approaching typhoon, calling on them to remain alert and not go out unnecessarily.

The typhoon is projected to have an atmospheric pressure of 915 hectopascals at its center and winds of up to 288 kilometers per hour on Sunday, warranting special alert, the weather agency official said.

The land ministry will arrange for the release of water from dams on Kyushu before heavy rain hits, a ministry official said.

Shinkansen bullet train services were temporarily suspended between Hiroshima and Hakata stations from the first run of the day as a precaution, and some domestic flights were canceled.

Of those injured in northern Kyushu, a man in his 60s fell from the roof of his home as he tried to spread a sheet on it, and a woman in her 70s hit her head against a shutter after being blown over by wind in Fukuoka Prefecture.

A man in his 80s fell and broke a leg in Saga Prefecture, while a woman in her 30s and her 2-year-old daughter sustained cuts from flying broken window glass in Nagasaki Prefecture.

As Typhoon Maysak made landfall at Busan, South Korea, early Thursday, a woman in her 60s died and around 120,000 households were temporarily without power, local media reported.

Meanwhile, as the typhoon moved north over the Sea of Japan, sucking warm air from the East China Sea, coupled with warm dry winds blowing down mountains, temperatures soared Thursday to 40.4 C in Sanjo, Niigata Prefecture, a national record high for September, according to the weather agency.