Japanese Prime Minister Yoshihide Suga on Saturday called for world solidarity in the fight against the novel coronavirus as he delivered his first address to the U.N. General Assembly via prerecorded video statement in his debut at an international forum.

Even with supply chain disruptions and other cross-border restrictions caused by the virus pandemic, Suga underscored the significance of multilateralism and free trade, and vowed to promote World Trade Organization reform and free trade agreements with other countries. 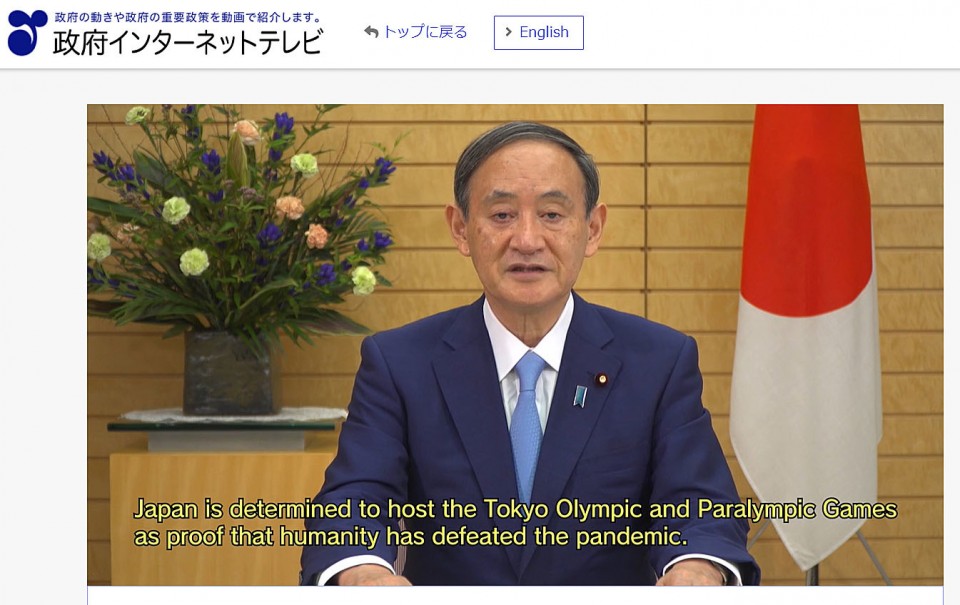 "The novel coronavirus disease has pulled us into an unprecedented crisis, which in turn has brought the international community back to cooperation from its tendencies towards division and isolation," he said.

"I call on all of you to unite in solidarity so we can turn the current crisis into an opportunity to reinforce our cooperation," he added.

Given the global pandemic of COVID-19, the respiratory disease caused by the coronavirus, the United Nations' 193 member states decided to allow prerecorded video statements for the general debate and other events such as a high-level meeting to commemorate the 75th anniversary of the world body in New York.

With reviving the economy resting on the safe movement of people, Suga said in his statement that Japan will make its best efforts to ensure universal distribution of vaccines and therapeutics.

"Japan fully supports the development of therapeutics, vaccines and diagnostics, and works toward ensuring fair and equitable access for all, including those in developing countries," he said, while advocating reform of the World Health Organization.

Suga said that to prepare for future health crises, Japan is committed to expanding efforts in developing countries to build hospitals and strengthen their health and medical systems through providing equipment and supporting human resources development.

Working with the 10-member Association of Southeast Asian Nations, Japan is supporting the establishment of an ASEAN Center for public health emergencies and emerging diseases, he said, adding that Tokyo is backing a similar initiative in Africa as well.

As part of efforts to assist virus-hit developing countries, Japan is extending $4.5 billion in emergency loans over two years through March 2022, and an additional $1.54 billion in external aid to the medical and health sectors, according to the prime minister.

With such efforts to bring the pandemic under control, Suga pledged to host the Tokyo Olympics and Paralympics in summer 2021, an event that was pushed back one year due to the pandemic.

"In the summer of next year, Japan is determined to host the Tokyo Olympic and Paralympic Games as proof that humanity has defeated the pandemic," he said.

Suga became prime minister and launched his Cabinet on Sept. 16, replacing Shinzo Abe, who stepped down due to health reasons. Suga had served as Abe's chief Cabinet secretary and spokesman for nearly eight years but his diplomatic skills remain unknown as he has been known as a domestic-oriented politician.

In his statement, Suga said Japan will advance digitalization "as a matter of urgency," underlining his determination to facilitate digitalization of government functions by setting up a digital agency.

As China has stepped up attempts to undermine Japan's control of the Senkaku Islands in the East China Sea and militarization of disputed areas in the South China Sea, Suga said Japan continues to promote "a free and open Indo-Pacific" based on the rule of law.

"We must not allow challenges against the rule of law in times of increasing uncertainties," he said, in a veiled criticism against Beijing's attempts to alter the status quo by force or coercion.

Suga reiterated his determination to resolve the issue of North Korea's abductions of Japanese nationals in the 1970s and 1980s as early as possible, and expressed readiness to meet with North Korean leader Kim Jong Un "without any conditions" to that end.

"As the families of the victims continue to age, there is no time to lose before we resolve the abductions issue," which has prevented the two countries from normalizing diplomatic ties, he said.

"Establishing a constructive relationship between Japan and North Korea will not only serve the interests of both sides but will also greatly contribute to regional peace and stability."

With this year marking the 75th anniversary of the U.S. wartime atomic bombings of Hiroshima and Nagasaki, Suga said Japan will spare no effort in realizing a world free of nuclear weapons.

He called for promoting nuclear disarmament and nonproliferation, while emphasizing the importance of strengthening the Treaty on the Non-Proliferation of Nuclear Weapons.