Tokyo confirmed 124 new coronavirus cases on Friday, a count that eclipsed the largest daily increase in two months marked the previous day and raised fears about a resurgence of the virus amid the recent worsening trend.

"We will take necessary steps to prevent (the coronavirus) from spreading further and brace for a possible second wave (of infections)," Tokyo Gov. Yuriko Koike told a news conference where she announced the latest figure.

Of the total, the Tokyo government data showed young people were especially hit, with those in their 20s and 30s accounting for around 80 percent, in line with a trend that has been seen recently.

None of the people reported to have been infected was in critical condition.

The number of cases confirmed on Friday, accounting for about half of nationwide daily increase, brings the cumulative total to 6,523 in the capital. Tokyo remains the hardest-hit of Japan's 47 prefectures.

On Thursday, 107 cases were reported, the largest daily increase since May 2, prompting the governor to warn people not to visit nightlife districts hit by increasing virus cases especially among young people.

The number of coronavirus infections in the capital decreased after peaking at 206 on April 17.

Infections have rebounded since the nationwide state of emergency was lifted in late May, with intensive testing carried out in parts of the capital following the recent rise in new cases in some entertainment districts. 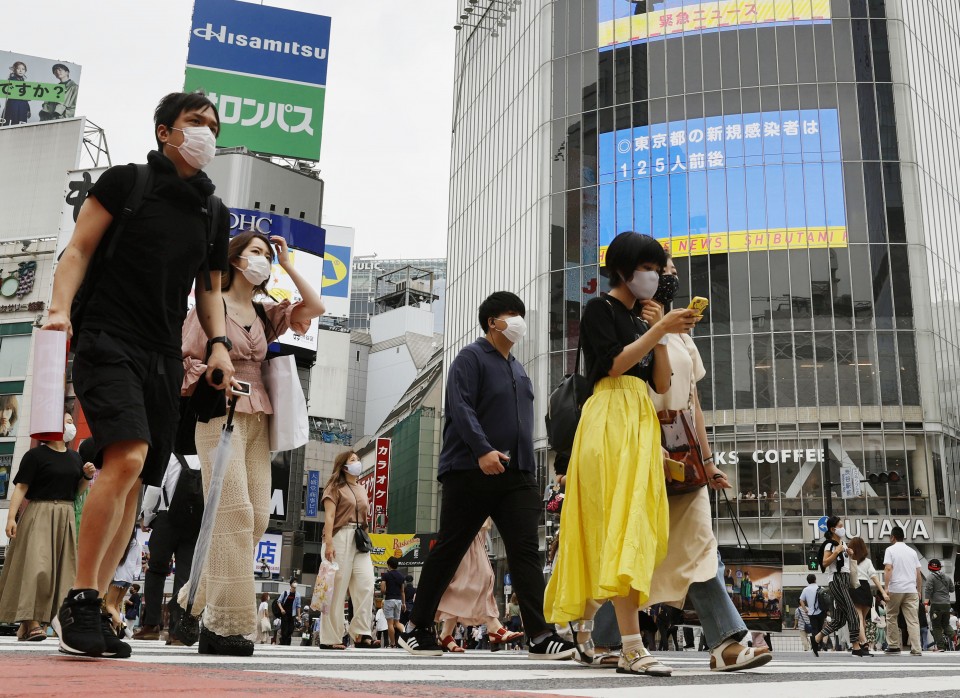 The governor also stressed that the Tokyo government will make efforts to reopen the virus-hit economy.

Asked about the possibility of reintroducing voluntary business closure requests, Koike struck a negative tone, but said the city government would consider the step if the central government again declares a state of emergency.

Koike also said the recent surge in infections is because more people who work at nightlife establishments such as host clubs are getting tested for the virus, leading to early detections.

"Things are a bit different from the time when (people) could not be tested easily," she said, referring to how the current situation is unlike that in the spring when the numbers surged.

The number of tests conducted in the capital on Thursday increased to 2,506 from 1,388 on April 17, when Tokyo recorded the highest daily number of cases, according to the metropolitan government data.

Prime Minister Shinzo Abe and ministers in charge of the coronavirus response agreed Friday that the government does not see the need to immediately reintroduce a state of emergency despite the increasing number of infections.

Across Japan, the daily count on Friday topped 200 for the first time since May 3. The number of confirmed nationwide cases topped 19,900, including about 700 from the Diamond Princess cruise ship that was quarantined near Tokyo earlier this year.

Aside from Tokyo, the daily count in the three neighboring prefectures of Chiba, Kanagawa and Saitama totaled around 60, while Hokkaido, the country's northernmost main island and a popular tourist destination, did not report any cases for the first time since April 6.